The annual “Sustainable Energy in America Factbook,” which features, analysis and data from Bloomberg New Energy Finance was released this week. The report 2017 was a “year in which economic growth accelerated while electricity and total primary energy demand fell, further lending credence to the trend of ‘decoupling’ GDP and energy consumption.”

VA has a voluntary renewable portfolio goal of procuring 15% of base-year (2007) electricity sales from renewables by 2025. In 2015, however, renewables provided less than 6% of electricity
generation. Nearly all of this came from biomass (including biogas and waste) and hydropower facilities. Between 2010 and 2015, VA built only 165MW of utility-scale renewable capacity,
alongside an estimated 17MW of distributed solar. Cumulative installed renewable capacity reached 5.1GW in 2015, including an estimated 24MW of residential and
commercial-scale solar capacity.

Utility-scale solar PV has been slow to take off, with an estimated 2MW of total installed capacity at end 2015; the pipeline, however, is more promising: two additional 20MW solar projects were recently permitted (expected to be online in 2017). Another source of potential growth may be in community solar: the BARC Electric Cooperative commissioned the state’s first community solar project (0.6MW) in August 2016. 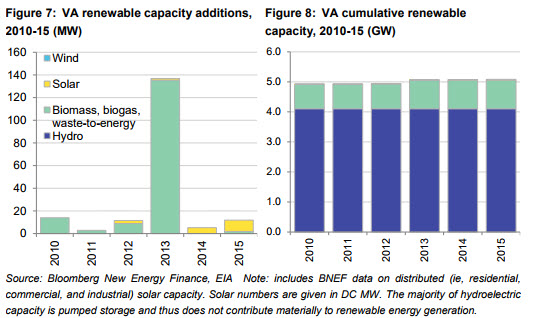 In the absence of explicit state-level support for renewables, Virginia has been a hotspot for corporate procurement of renewable energy. Both Amazon and Microsoft have recently inked
contracts with new-build utility-scale solar projects of 260MW and 20MW, respectively, with the involvement of local utility Dominion Energy. The projects are expected to be commissioned in
2017-2018 (and thus are not included in the figures above) and are additional to the two 20MW projects noted previously.

The state has no utility-scale wind installations, but it houses six manufacturing facilities that produce components for the wind industry, and various entities have been exploring opportunities for offshore wind.

VA ranks near the bottom of the state list (33rd) in terms of its overall energy efficiency efforts, according to a scoring system devised by the American Council for an Energy Efficient Economy (ACEEE). It gave the state a relatively low overall efficiency score (13 out of 50) and a negative score (-0.5 out of 20) for utility and public benefits programs and policies (a component of ACEEE’s overall score). Figure 10 shows VA’s annual utility electricity revenues (black bars, left axis, $bn) and utility energy efficiency program spending (green line, right axis, $m) from 2011 to 2015 while Figure 11 shows how VA stacks up to its neighbors on the latter metric. For reference, utilities in Maryland (MD) and New Jersey (NJ) – states that operate in the same wholesale power market as VA – dedicated 3.7% and 1.7% of state-wide electric revenues to efficiency programs, compared with 0.0% for utilities in VA in 2015.