A new report to the US Congress from the National Marine Fisheries Service, Recovering Threatened and Endangered Species, updates progress made on its strategic approach to endangered species recovery that focuses agency resources on species for which immediate, targeted efforts are needed to stabilize their populations and prevent extinction. The report highlights progress made on recovery efforts for the eight species identified in the Species in the Spotlight initiative. The best available information points to their extinction in the near future because of rapid population decline or habitat destruction. These species need focused human intervention to stabilize their population declines and prevent their extinction. During the 2 years covered in this report (October 1, 2014 – September 30, 2016), the number of listed species under NMFS jurisdiction increased 18%. During that period, NMFS managed 93 domestic species of salmon, sturgeon, sawfish, seagrass, mollusks, sea turtles, corals, and marine mammals, and 54 foreign species. 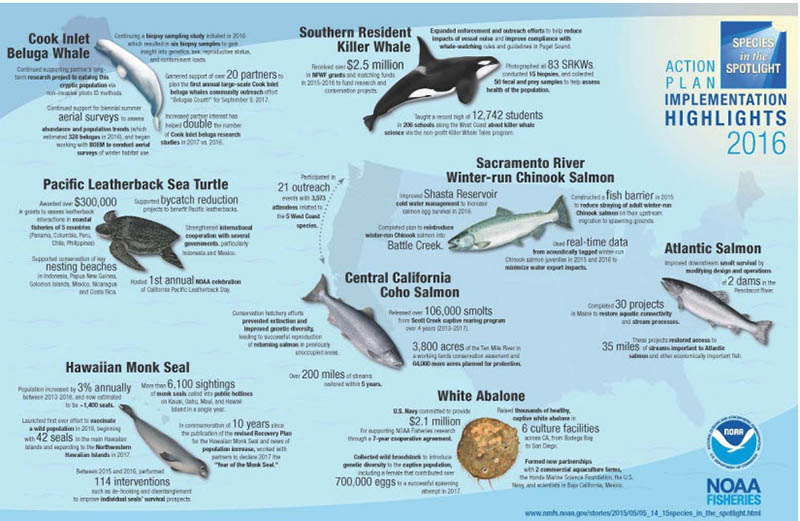 • 27 (31%) were stabilized or increasing.
• 16 (18%) were known to be declining.
• 12 (14%) were mixed, with their status varying by population location.
• 32 (37%) were unknown, because we lacked sufficient trend data to make a determination Since the 2012-2014 Biennial Report on status of population trends, these percentages reflect a 4% increase in declining trends; a 3% decrease in increasing trends; a 5% increase in mixed trends; and a 6% decrease in unknown trends.

Additional information on these species is available online at http://www.nmfs.noaa.gov/pr/species/index.htm.