This article appeared this week on Yahoo Sports.

Croatia? Why can’t the U.S. do as well in men’s soccer as Croatia?

That’s a question you’re likely hearing, asking, or even screaming this week as a nation smaller in size and population than Indiana makes the World Cup semifinals while the Americans watch on TV.

The pat answer is one you’ve also likely heard: here in this country, the top athletes play basketball and football, not soccer. That doesn’t hold up exceptionally well, though. It’s not like there are only a small number of elite athletes in the U.S. If America can win a gold medal in curling, it should be able to make the semifinals in the World Cup.

One likely answer: cost. America has either priced out or spooked out many talented children from diverse backgrounds. That’s according to an array of coaches, top players and soccer parents Yahoo Sports spoke with for this story.

“People of different incomes and diversity groups are being left out,” says Michael Fitzgerald, who runs the Saints Soccer Academy only a few miles from Nike headquarters in Oregon. “A lot of families are priced out.” 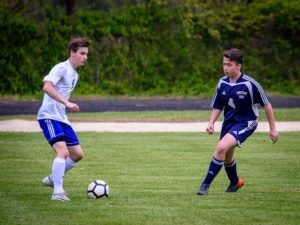 Fitzgerald has made a concerted effort to make his club affordable to everyone, whether through volunteer coaches or scholarships for players, but he sees obstacles ranging from immigrant groups who “don’t want to be on record” to language barriers to simple perception.

“Some of the Hispanic community here, they have access but they don’t pursue it,” Fitzgerald says. “Because of the perception that it’s a rich man’s sport. They don’t chase it. They see all the rich kids playing soccer. They say that’s not for us. There’s no pathway.”

A study on the subject that was referenced in Time last year cited the “maximum” cost to a soccer family as $5,500 per child, but it was not hard to find families with promising kids whose costs blew way past that. One soccer mom in North Carolina, who asked to remain anonymous so she could speak openly about family finances, said she spends $5,200 per year on club fees alone for her 14-year-old boy. That doesn’t include costs for uniform, health care and summer training. “You can keep going and going and going,” she said.

Another parent on the West Coast said, “If your kid is doing the most competitive club and futsal and ODP [the Olympic Development Program], the parent is spending at least $8,000 a year.” Asked to tabulate her own costs for a child who is not yet at that top level, she spent a few minutes and then texted, “I knew I would choke if I penciled out the numbers.”

The women’s national team is far more successful than the men, winning the World Cup in 2015 and likely favored again next year, but that doesn’t mean the same issues don’t arise on that side.

“I don’t think it’s any secret or any surprise to anybody that soccer in America has recently been a very affluent, suburban sport,” said Crystal Dunn, who has played for the national team and now stars for the NWSL’s North Carolina Courage. “The next level of growth is to include everybody in urban and rural populations and make sure everyone has access to the game, both boys and girls.”

Dunn is African-American, but she grew up in a mostly white neighborhood.

“For me, everyone I saw was white,” she said. “That’s just the reality of it. My parents made good money and worked really hard and it’s not always that way for people, I think, of my complexion. I think I was really fortunate.”

Her former teammate, goalkeeper Hope Solo, made headlines recently by calling soccer in America a “rich white kid’s sport.” She said if she had come up in this era, as a working-class child from Washington state, she would have been looked over or priced out.

“I do feel like there is a problem in the U.S. with younger kids having to pay to play,” Morgan said. “I wish it was more available to all kids.”

When most think of “diversity” it becomes a thought about race. Here, though, it’s also about background, class and even family structure. One of the parents interviewed for this story said that of the families she had met in New Jersey and North Carolina over the past decade of soccer, nearly all of them had two incomes at home.

“Having grown up in a divorced home,” she said, “there’s no way we could have achieved that.”

There are many efforts underway to reach across barriers. Operation Pitch Invasion is dedicated to building soccer fields in non-traditional places “so that kids of all ages have high-quality and safe playing surfaces to enjoy the beautiful game.” America Scores offers a unique combination of “soccer, poetry and service-learning” to give inner-city youth better after-school options.

But it’s not just about introducing and developing the game at the grass-roots level. It’s also about helping talented kids compete in a world that’s top-heavy in top-earning families. “I don’t know if you have to be traveling all the way to California for good matches when you’re 14 years old,” says U.S. national team member Heather O’Reilly, who contributes to America Scores.

The U.S. is a capitalistic society, proudly, and the goal for many is to be profitable as well as to be helpful. So as the interest in soccer increases, so will the interest in the business of soccer. That may make the effort to diversify even tougher, when it seems like it should be the opposite.

This might be the No. 1 challenge for new U.S. Soccer president Carlos Cordeiro. He was born in Bombay and moved to Miami as a teen, but he’s considered an insider in the soccer world. He attended Harvard Business School and he was a partner at Goldman Sachs. As part of his platform, he wrote about the need to “invest new resources to make soccer more affordable for youth, especially in our cities and underserved communities.”

It’s only been a few months, but Fitzgerald hasn’t seen much of a change yet.

“I wish there was a bigger braintrust focusing on this,” he said. “I haven’t heard a single word about it since our new president took office. There are a ton of kids who are getting overlooked. And this is Portland; I can only imagine what L.A. is like.”

Find those kids in those cities more frequently, and the U.S. might still be playing at this stage in the 2022 World Cup. After all, the populations of L.A. and Portland add up to roughly the size of Croatia.