Last Wednesday, part of the Omega menhaden fishing fleet, the John Dempster was “pulling in hundreds of thousands of menhaden from the bay” when its net ripped and dumped about 75,000 dead fish into the water. According to Omega, this kind of accident happens two or three times a year. Many of the Bunker washed up on our Beach over the weekend. 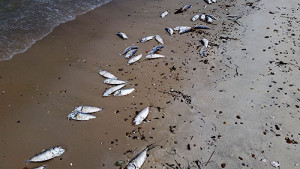 For many, this is just one more reason why industrial fishing for menhaden should not be allowed in the bay (considered a nursery for juvenile menhaden). Sometimes dubbed the most important fish in the sea, Menhaden play a vital role as forage fish for other bay fish and water birds, such as rockfish and osprey.

According to Omega spokesman, “There’s no regulation against being able to not tear your net. It’s just an accident. We’ve always taken responsibility. We notify VMRC as soon as it happens and we look at it as our responsibility to clean it up. That’s been our practice for a number of years.”

Editor’s Note: The Mirror was alerted to this story by Cape Charles resident Beth Calder. All Photos courtesy of Beth Calder.

Note: The Omega Reedville plant is the last remaining menhaden reduction facility left on the Atlantic coast. This operation ‘reduces’ menhaden (by grinding and boiling) down into pet food, fertilizer and even vitamin supplements. 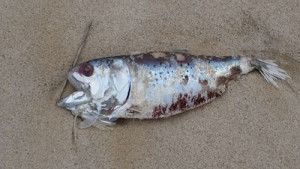 On our beach, shore bird citizens headed the cleanup operation, and as of yesterday, most of the fish had been removed.