The Mirror recently emailed a series of questions to a member of the Northampton County Board of Supervisors, and after not receiving a response after several days, attempted to contact them again. We were told that they never received the email, however we checked our logs and the email was sent and delivered. We found out later that while we sent the correspondence to the official county email, that account was only checked once in a while. Most of the county business was occurring via the supervisor’s personal email account.

While it is perfectly legal to use a personal email account, it would seem that the BoS has official accounts for a reason, and that they should be used to conduct all county business. In an off the record exchange, one former supervisor told the Mirror that this practice was unusual, and while they served on the board, the protocol to use official email was defined and hammered home on numerous occasions.

As citizens, we have the right to know what our government is doing, and having an official government email address is important from an accountability standpoint.
Local public bodies are subject to Freedom of Information laws so that government records, even emails sent from a private system, must be made available upon request when they relate to public business.

The email  below clearly shows Board Chairman Spencer Murray using his personal email for county business: 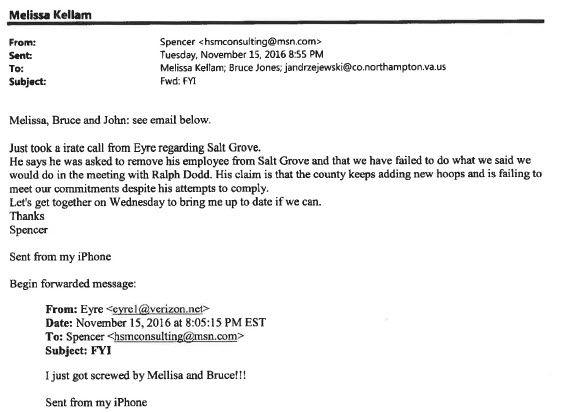 Correspondence between BoS Chair Spencer Murray and the zoning administrator.

While a private email account can be managed without issue, if proper records management protocols are not in place, this could become an issue. Whether all personal emails make it into the public record is questionable. The use of personal email could create a misperception about the motives of the government official.

For many in the county, one of the major sticking points over the 2015 zoning ordinance was a lack of transparency. Using personal email accounts to conduct official county business hardly seems to promote open government, transparency and accountability.