Special to the Mirror by Tatum Ford, CBF’s Virginia Eastern Shore Outreach Coordinator. Although this beautiful piece references the fall migration, we feel it is apropos of every season on the shore. Ms. Ford is also the chairman of the recently reinvented ESVA Birding and Wildlife Festival which is scheduled for Oct 6-9.

Fall is the season of movement and change. The days shorten, the weather shifts, the world changes color, and the skies are filled with newcomers and old friends alike. On the Eastern Shore of Virginia nature thrives all year long and transients flock in abundance.

With its countless tidal mudflats, dunes, marsh, miles of beach, vegetated plains, and maritime forests, the Shore provides critical stopover points for an array of migrating birds. In fact, our peninsula embodies one of the most important migration bottlenecks in all of North America. Eastern Shore parks, refuges, preserves, and national seashore add up to more than 78,000 acres of protected lands, and it’s no surprise that the flora and fauna thrive accordingly. “Habitats here receive extremely high use by migrant land birds during the fall months and are considered to have some of the highest conservation values on the continent,” says Center for Conservation Biology Director Bryan Watts. 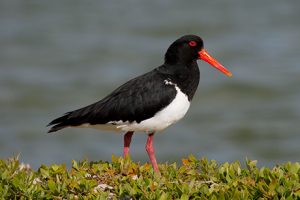 Until about mid-December, a host of migrating birds pass through the Shore on their way from summer grounds in the Northeast and Canada to wintering spots in the Southeast and the Caribbean. In the fall, warblers, sparrows, blue jays, thrushes, robins, finches, and flickers are a familiar sight. Unfortunately, as many as half of all migrating birds do not complete their journey.

However, we can extend our good old Eastern Shore hospitality to our feathered friends by providing a haven for weary winged travelers this season. Any yard can be transformed to help the more than 200 species of migratory birds hard wired to visit us every year.

Create backyard habitat by planting native grasses, flowers, shrubs, and trees. They will provide crucial food and shelter for birds. Eastern Shore native plants support both the rich tapestry of species that call the Shore home and those that use our lands as a crucial pit stop. Native plants also tend to have deep roots, so they stabilize soil and prevent polluted runoff from entering nearby rivers and creeks. In fact, including natives in the landscape is one of the easiest (and most beautiful) steps property owners can take to both provide wildlife habitat and reduce pollution in local waterways, notes Dot Field, Region Steward for the Eastern Shore Natural Heritage Program of the Department of Conservation and Recreation.

Additionally, planting native plants is just one of the many ways we can make progress toward Virginia’s commitments under the Chesapeake Clean Water Blueprint, the action plan to clean up our waterways. “With native plants, we can help clean up the Bay while enhancing the environment and creating valuable bird habitat,” says CBF’s Senior Educator Bill Portlock.

Native plants also require little-to-no maintenance, so you won’t have to worry about watering routines and there’s no need to use fertilizers or pesticides. Those chemicals can be toxic to birds and also pollute waterways and kill insects that birds rely on for food.

There are many reasons we should lend a hand to migrating visitors, explains American Bird Conservancy President George Fenwick. “Protecting and helping birds is not only the right thing to do, it is also good for the economy and the future of our environment. Birds are invaluable as controllers of insect pests and as pollinators of crops, and also generate tremendous economic revenues through the pastimes of bird feeding and birdwatching,” Fenwick says.

Virginia’s Eastern Shore is nationally recognized as a birdwatching destination. More than 20 percent of the U.S. population participates in birdwatching, according to a recent federal government study, and about 20 million people travel annually to see birds. These birders spend about $36 billion a year in pursuit of their pastime, and support bird haven economies by frequenting hotels, local restaurants, and other attractions. In fact, at this year’s Eastern Shore Birding and Wildlife Festival around Cape Charles, about 85 percent of the hundreds of registered participants came from distances that required overnight stays.

But migrating birds have value well beyond the incredible economic stimulus they provide. Observing traveling birds is one of the ways we mark the changing seasons and connect with the rhythms of nature, famed biologist and conservationist Rachel Carson wrote in her book The Edge of the Sea. “There is symbolic as well as actual beauty in the migration of the birds; in the ebb and flow of the tides; responding to sun and moon as they have done for millions of years; in the repose of the folded bud in winter, ready within its sheath for spring,” she states. “There is something infinitely healing in these repeated refrains of nature, the assurance that night after night, dawn comes, and spring after winter.”