In the mid-20th century, a physician from Onancock, Dr. John Robertson, traveled the Eastern Shore, camera in hand, photographing whatever subject caught his fancy. Over the course of 40 years, Dr. Robertson’s photograph collection grew, including over 500 pictures of Eastern Shore homes. Each house was unique, both in architectural style and history.

The Eastern Shore of Virginia Historical Society’s newest exhibit, Architecture & Change: Preserving the Eastern Shore, takes a look at the homes that Dr. Robertson photographed from then and now, exploring the architecture and stories that makes these Eastern Shore homes unique. The exhibit will be on display at Ker Place September 29 through December 9 with an opening reception on Friday, September 29 from 6 p.m. – 8 p.m. Admission to the reception is free and open to the public. Hors d’oeuvres will be served and there will be a cash bar. Proceeds from the sales will benefit the Historical Society.

In conjunction with the exhibit, the ESVHS will delve into the histories of Sears kit homes on the Shore with an evening lecture and book signing with Rosemary Thornton, author of over seven books including The Houses that Sears Built and her latest, Penniman: Virginia’s Own Ghost City. The lecture and book signing will be held on Friday, October 20 from 6 p.m. – 7 p.m. Admission is free for ESVHS members and $5 for not-yet members. 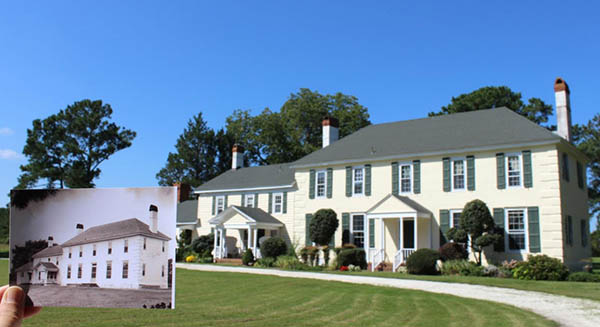 Evergreen, Accomack County, Virginia. Then (1960) and now (2017). The earliest portion of Evergreen was built circa 1766 with the middle frame built around post-Civil War, and attached kitchen frame built in the early 1900’s. (Photo ESVHS)

All event proceeds benefit the Eastern Shore of Virginia Historical Society and their commitment to bringing exciting and quality educational programs to the Shore community.