This article is special to the Mirror by By Karen Davis, PhD, President of United Poultry Concerns. It first appeared in UPCs Poultry Press.

“Her love of her children definitely resembles my love of mine.” – Alice Walker

“The emphasis has been on smaller, more efficient but lighter-weight egg machines.” – American Poultry History

In our day, the hen has been degraded to an “egg machine.” In previous eras, she embodied the essence of motherhood. In the first century AD, the Roman historian Plutarch praised the many ways in which mother hens cherish and protect their chicks, “drooping their wings for some to creep under, and receiving with joyous and affectionate clucks others that mount upon their backs or run up to them from every direction; and though they flee from dogs and snakes if they are frightened only for themselves, if their fright is for their children, they stand their ground and fight it out beyond their strength.”

The Renaissance writer Ulisse Aldrovandi described how, at the first sign of a predator, mother hens will immediately gather their chicks “under the shadow of their wings, and with this covering they put up such a very fierce defense – striking fear into their opponent in the midst of a frightful clamor, using both wings and beak – they would rather die for their chicks than seek safety in flight.” Similarly, in collecting food, the mother hen allows her chicks to eat their fill before satisfying her own hunger. Thus, he said, mother hens present, in every way, “a noble example of love for their offspring.” 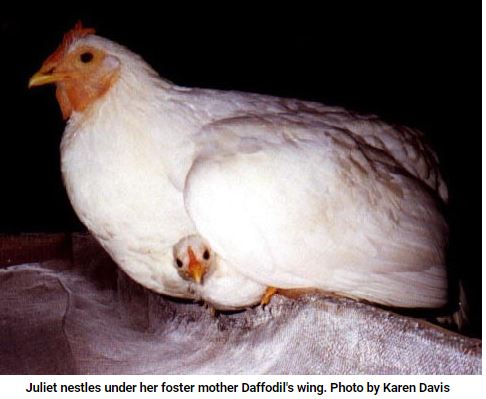 I saw this love in action, when a hen named Eva jumped our sanctuary fence on a spring day and disappeared, only to return three weeks later in June with eight fluffy chicks. Watching Eva with her tiny brood close behind her was like watching a family of wild birds whose dark and golden feathers blended perfectly with the woods and foliage they melted in and out of during the day. Periodically, Eva would squat down with her feathers puffed out, and her peeping chicks would all run under her wings for comfort and warmth. A few minutes later the family was on the move again.

One day, a large dog wandered in front of the magnolia tree where Eva and her chicks were foraging. With her wings outspread and curved menacingly toward the dog, she rushed at him over and over, cackling loudly, all the while continuing to push her chicks behind herself with her wings. The dog stood stock still before the excited mother hen and soon ambled away, but Eva maintained her aggressive posture, her sharp, repetitive cackles and attentive lookout for several minutes after he was gone.

Sitting on her nest, a mother hen carefully turns each of her eggs as often as thirty times a day, using her body, her feet, and her beak to move each egg precisely in order to maintain the proper temperature, moisture, ventilation, humidity, and position of the egg during the 3-week incubation period. Embryonic chicks respond to soothing sounds from the mother hen and to warning cries from the rooster. Two or three days before the chicks are ready to hatch, they start peeping to notify their mother and siblings that they are ready to emerge from their shells, and to draw her attention to any distress they’re experiencing such as cold or abnormal positioning.

A communication network is established among the baby birds and between them and their mother, who must stay calm while all the peeping, sawing, and breaking of eggs goes on underneath her as she meanwhile picks off tiny pieces of shell that may be sticking to her chicks and slays any ants that may dart in to scavenge. During all this time, as Page Smith and Charles Daniel describe in The Chicken Book, “The chorus of peeps goes on virtually uninterrupted, the unborn chicks peeping away, the newborn ones singing their less muffled song.”

During the first four to eight weeks or so, the chicks stay close to their mother, gathering beneath her wings every night at dusk. Eventually, she flies up to her perch or a tree branch, indicating her sense that they, and she, are ready for independence.

Whenever I tell people stories about chickens enjoying themselves, many become very sad. The pictures I’m showing them are so different from the ones they’re used to seeing of chickens in a state of absolute misery. The New York Times restaurant critic William Grimes wrote of a beautiful black hen who entered his life unexpectedly one day, an apparent escapee from a poultry market in Queens. “I looked at the Chicken endlessly, and I wondered. What lay behind the veil of animal secrecy? Did she have a personality, for one thing?” His curiosity is satisfied by close acquaintance with and observation of the endearing bird. By the end of his bittersweet book My Fine Feathered Friend, he and his wife Nancy “had grown to love the Chicken.”

We have to start looking at chickens differently, so that we may see them as Alice Walker described her encounter with a hen she watched crossing the road one day with three little chicks in Bali. In her essay, “Why Did the Balinese Chicken Cross the Road?” in Living By the Word, Walker writes:

It is one of those moments that will be engraved on my brain forever. For I really saw her. She was small and gray, flecked with black; so were her chicks. She had a healthy red comb and quick, light-brown eyes. She was that proud, chunky chicken shape that makes one feel always that chickens, and hens especially, have personality and will. Her steps were neat and quick and authoritative; and though she never touched her chicks, it was obvious she was shepherding them along. She clucked impatiently when, our feet falling ever nearer, one of them, especially self-absorbed and perhaps hard-headed, ceased to respond.

Let us with equal justice perceive chickens with envisioned eyes that pierce the veil of these birds’ “mechanization” and apprehend the truth of who they are. In The Chicken Book, Page Smith and Charles Daniel remind us, most poignantly: “As each chick emerges from its shell in the dark cave of feathers underneath its mother, it lies for a time like any newborn creature, exhausted, naked, and extremely vulnerable. And as the mother may be taken as the epitome of motherhood, so the newborn chick may be taken as an archetypal representative of babies of all species, human and animal alike, just brought into the world.”

This is What Wings Are For.