Oyster, Virginia — The Nature Conservancy and Virginia Marine Resources Commission are collaborating to build three acres of new oyster reef offshore from the village of Oyster on the Eastern Shore.

The Hillcrest Shellfish Sanctuary in Mockhorn Bay, immediately adjacent to Oyster village, will be expanded by approximately two acres. Local watermen are providing input on the location of an additional reef farther offshore in the vicinity of Cedar Creek. This new one-acre reef will eventually be open to public harvesting, after the oysters reach a harvestable size.
The Hillcrest sanctuary will be closed to shellfish harvest but will provide opportunities for recreational anglers, as gamefish including rockfish, speckled trout and summer flounder are drawn to the food and cover that oyster reefs provide. Sanctuary reefs also produce masses of larval oysters that help boost the growth of public shellfishing grounds.

“This joint effort leverages the knowledge and expertise of The Nature Conservancy, state employees and local Virginia watermen to expand an oyster sanctuary and to create an area for harvesting,” said Molly Joseph Ward, Secretary of Natural Resources. “This is a great example of the collaborative partnerships needed to ensure a robust and sustainable oyster population today and well into the future. These reefs will provide significant ecological benefits and economic opportunities for our hardworking watermen. We are grateful to The Nature Conservancy.”

A local subcontractor has begun construction on the reef, and is expected to wrap up by November. Fossil shell – a mixture of oysters and other shells – was dredged from Sand Shoal Inlet to provide substrate, and then barged to the restoration site where it is dispersed into the water with a high-pressure water cannon. VMRC is overseeing the operation to ensure the proper configuration of this foundation for new living reefs.

“Oyster reefs are essential to a healthy, thriving marine environment,” said Bo Lusk, coastal scientist with the Conservancy’s Virginia Coast Reserve. “All reefs provide critical habitat for fish and crabs, along with a host of services such as filtering water and protecting coastlines from erosion.”

Just as coral reefs are critical to tropical marine habitats, oyster reefs are the ecosystem engineers of bays and estuaries. They provide vital services to people and nature:
• Clean water: A single oyster can filter as much as 50 gallons per day.
• Food and habitat: Fish, crabs and birds live and/or feed around reefs.
• Natural coastal buffers: Reefs dampen impacts from storms and rising seas.

Massive oyster reefs once dominated the Chesapeake Bay and other Atlantic estuaries, but decades of over-harvesting, disease, pollution and loss of habitat have decimated populations. These severe local declines are part of a global problem, as 85 percent of the world’s oyster reefs have been lost, making them the most severely degraded marine habitat on Earth.
Regionally, one of the biggest challenges to oyster restoration is the scarcity of shells on which new reefs can grow. Larval oysters are abundant off the Eastern Shore in late spring and summer, drifting with currents and tides. But these oysters perish if not able to find a suitable landing spot where they can attach, link with other juveniles (called spat), and contribute to a living, growing reef. 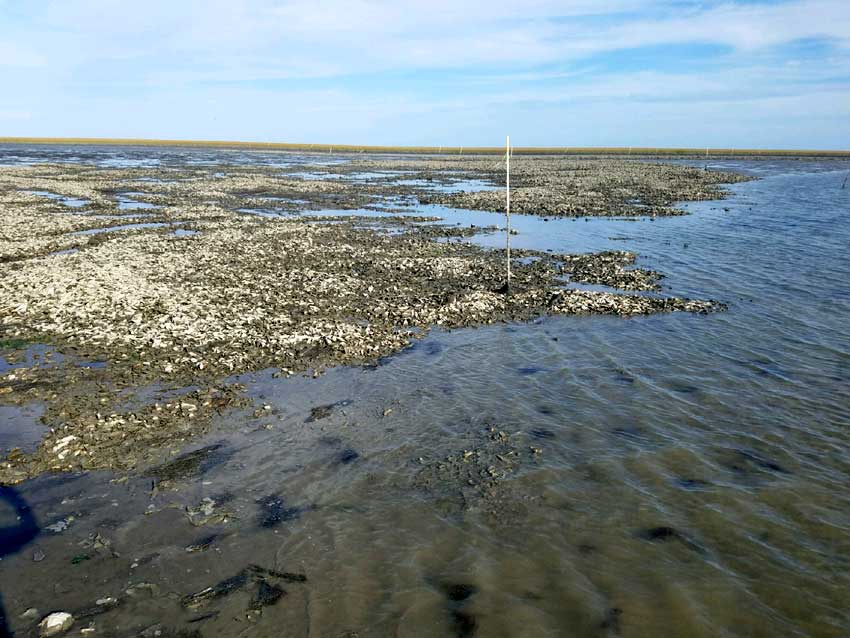 Elsewhere along the Eastern Shore—and within a network of projects along the Atlantic and Gulf coasts—the Conservancy and diverse partners are experimenting with different restoration techniques and reef materials, including alternate substrate or the assemblages of concrete “oyster castles.” One recent example is the construction of a new, 25-acre reef in Virginia’s Piankatank river made with concrete blocks, which was headed up by the Army Corp of Engineers in partnership with the Conservancy and VMRC.

The Conservancy is contributing $187,000 toward the construction of these newest reefs, which will contribute to a growing body of scientific knowledge and restoration expertise. Marine scientists will monitor the sites and document the relative success of sanctuary and harvested reefs.