On May 11 thru 13, Arts Enter and the Palace Theatre will present the musical Don’t Stop Believen’. The Ethel Lampert Community Center has seen better days and may soon see its final days unless the teens, volunteers, and staff find a way to save it. Some sleazy town council members want to bulldoze the place to redevelop and commercialize the neighborhood and bring them gobs of sales tax revenue, but that’s not stopping the teens who frequent the community center. From basketball players to computer nerds to artists, these down-on-their-luck kids have no place else to go, and losing the center would mean losing their home away from home. When they hear of a new television reality contest for glee clubs, they decide to form their own and try out. If they win the top prize, they’ll earn enough money to keep the center open.

Also at the Palace,  a screening of the Aviva Kempner documentary “Rosenwald: The Remarkable Story of a Jewish Partnership with African American Communities” at the historic Palace Theatre on Saturday, May 12th at 1pm. DVDs of the documentary will be available for purchase. 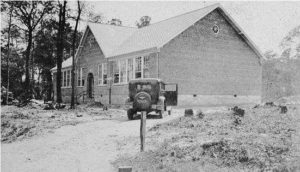 The Rosenwald taken circa 1928-29, while the school was under construction. The Cape Charles Elementary Rosenwald School was built for the education of our community’s African American children during legal segregation, and still stands today. It, along with Rosenwald Fund schools throughout the Commonwealth, has been on Preservation Virginia’s list of most endangered historical sites since 2013