The Cape Charles Town Council attended a presentation Thursday on the Virginia Main Street Program given by Felicia Hart, Community Development Director for the Town of Front Royal. The Main Street Program is entering its 40th year, and was developed as way to help aging ‘downtowns’ revitalize and adapt to the changing retail environment. According to Ms. Hart, the role of the small town Main Street has changed over the years, and cannot be expected to provide the range of services and products that are made readily available by national chains such as Food Lion or WalMart. 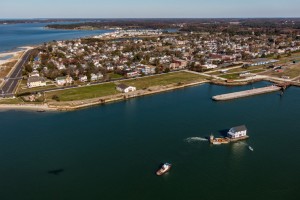 While our Main Street, Mason Avenue, or Front Street may be an economic asset, it is really much more; it is the essential element in how we brand and define our town, as well as being a fundamental link to our past. Mason Avenue and the Harbor District accounts for a big chunk of our tax base, but according to Hart, making it thrive requires more than just a new coat of paint. It takes a holistic approach which the Main Street Program describes as the Four-Point Approach – Organization, Promotion, Design and Economic Restructuring.

Organization establishes consensus and cooperation among folks that have a stake in the commercial district. This should be a collaborative effort which provides effective, ongoing management and advocacy for the Mason Avenue business district. A broad cross section of the community, incorporating a range of perspectives will generally produce the best results. A governing board of directors and standing committees make up the fundamental organizational structure. Coordination is provided by a paid program director. This structure not only divides the workload but builds consensus and cooperation among the various stakeholders.

According to Hart, the promotional aspect means cultivating the image and promise of Main Street, marketing the downtown’s unique characteristics to shoppers, investors, both existing and new businesses, and visitors. You build this image by creating a positive image through advertising, retail promotional activity, special events and marketing campaigns. Again, this is mainly a volunteer effort.

Design deals with the physical aspect of the town, capitalizing on its best assets – such as historic buildings and traditional pedestrian-oriented layouts. The core aspect is creating an inviting atmosphere through window displays, parking areas, building improvements, street furniture, signs, sidewalks, street lights, and landscaping. All of this is meant to convey a visual message about what the commercial district is and what it has to offer.

Economic Restructuring – While part of this is to leverage and strengthen current economic assets, working to expand and diversify the economic base is another goal. By expanding existing businesses  and recruiting new ones to respond to current market trends, Main Street programs help convert unused or underutilized space into economically productive property.

While the basic premise is valid, how far, or to what level the town was willing to go was discussed. Part of the discussion involved whether Cape Charles should apply to be just an affiliate of the program, or go for full blown ‘Designated Community’ status. According Hart, becoming designated involves a good of work, including becoming a 501c; she noted that being an affiliate provides almost the same amount of benefits, including training by Main Street subject matter experts, without the hassle of maintaining the higher status. It was the general consensus that the affiliate route was probably optimal. Relative to the makeup of the board, Mayor Proto and Councilman Buchholz discussed having it represent as broad a spectrum of the town as possible, leveraging the business community, churches, private organizations as well as local citizens.

Next steps may involve forming a working group to explore starting a revitalization initiative. As mentioned, this may include local merchants, business owners, property owners, and residents. Town Manager Brent Manuel has been working for several months laying the groundwork; a public meeting has been held regarding the basics of the program.

Luray’s Downtown Development Plan Philosophy attempts to create a compelling vision of a fully functioning future downtown marketplace. “Successful private, for‐profit commercial developers attract investors and tenants by helping them see a vision of themselves making money as part of a successful place.” The elements of Luray’s vision are a sound market position and marketing plan; Well‐developed and managed leasable space; and a well‐designed clustering/leasing plan.

The main takeaway is that location connects us to a strong rural and agricultural heritage, Eastern Shore history and heritage, as well as many levels of outdoor recreation. The surrounding area offers so much, such as the Cape Charles Historic District (National Register of Historic Places); ferry and railroad history, Historic Eastville (oldest continuous court records), etc. How Cape Charles leverages these multiple market segments is the question. Next steps involve determining if and how the Main Street Program can provide some of the answers.