EXMORE, VA (May 4, 2017) – Exmore Mayor Douglas Greer has announced that within the first days of May 2017, three established businesses have relocated to Exmore, taking advantage of the positive businesses environment, growing infrastructure and high visibility of the commercial districts along Route 13 and the downtown area.

Dollar General, the largest of the three-national dollar-discount chains, is introducing its PLUS concept in the newly constructed 8,000+ square-foot building at 3435 Lankford Highway. In addition to having a bigger footprint and carrying an upgraded merchandise mix that includes more grocery and beverage selections, Dollar General PLUS stores are more customer-centric. The store layout and aisle configuration help expedite the shopping process. The new check-out format is faster and more convenient. 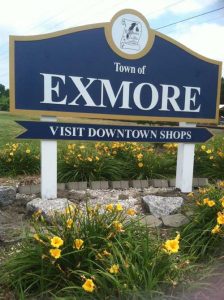 Mayor Greer points out that Dollar General is a fast-growing, Fortune 200 firm with more than 13,000 stores nationwide, saying “Exmore is proud to add the expansion of this national brand to the growing roster of businesses who have chosen to make their home in our town.”

A strong regional brand, McCaleb-Metzler, the Eastern Shore branch of Bankers Insurance, is relocating its offices to Exmore, taking over the building preciously occupied by the Eastern Shore Land Trust at 4253 Lankford Highway. A full-service insurance firm, providing both personal and commercial coverage on the Eastern Shore for over 70 years, McCaleb-Metzler has outgrown their Belle Haven offices and is expanding into larger, more conveniently located space in Exmore, directly on Rt. 13. The official ribbon cutting ceremony is scheduled for May 11 at 11.a.m.

Downtown Exmore is also welcoming a new business tenant on Main Street. Local entrepreneur and artist Richard Williams is moving the distribution center for his privately-owned company, Being Well at Hillcrest, from New England to Exmore, and may add an art studio to the premises.

Already one of the largest commercial centers on Virginia’s Eastern Shore, surpassing other Northampton communities in the number of businesses and professional services firms, Exmore is preparing for additional, strategic growth. Infrastructure improvements are underway, including a new water treatment facility supported by a $500,000 Community Development Block Grant from the State of Virginia, targeted for completion by July 2018.
“Exmore has a reputation as a business-friendly town,” said David McCaleb, Eastern Shore Branch Executive for Bankers Insurance. “The fact that its mayor and other officials are easy to work with, combined with its open-for-business atmosphere, influenced our decision to choose Exmore.”