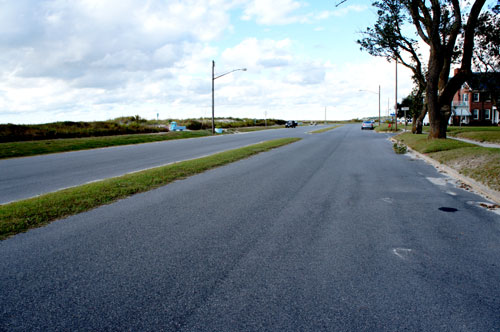 Even as summer is over, Cape Charles is still trying to come to terms with the continued increase in beach visitors. Between  May and September town staff conducted observations and counts of the parking along various segments of Bay Avenue.

Bay Avenue was broken into two sections – Washington Avenue to the Pavilion (west side), and Pavilion south (west side). The standard count of a sixty-six motor vehicle, of all kinds, was used as the threshold beyond which the west side parallel parking pattern supply would experience excess demand pressure. The sixty-six count of parallel parking stalls comes from the 1999 town-wide parking study.

Staff determined that lacking defined parking stalls or blocks, the current state of parallel parking does not make for the most efficient use of space. Defined spaces or blocks would make the parallel parking pattern more rational.

Out of a total of 41 observations, the sixty-six count was exceeded 27 times or 65.85% of the observations. The cumulative 2015, 2016, 2017 and 2018 counts show 221 individual observations, with 80 instances of the count exceeding sixty-six vehicles. A four-year total of 36.2% of observations exceeded the sixty-six vehicle standard. 2015 to 2017 three-year total was 29.44%, so an increase is recognized. It should also be noted that golf carts parking on the west side of Bay Avenue park perpendicular to the curb, resulting in more space for vehicles to park, compared to those golf carts parking parallel in an eighteen-foot-long parking stall. Perhaps not surprisingly, seventeen of the nineteen times (89.47%) the sixty-six vehicle standard was exceeded occurred on a Friday, Saturday, or Sunday. The single highest total count on a weekend day was 94.

In the 2017 staff report a number of reasons were presented to support the recommendation not to expand the implementation of reverse-angle parking on the west side of south-bound Bay Avenue.

Is Reverse-Angle Parking coming to the Beach?

In fall 2017 Cape Charles Main Street did a community-wide survey with seventy-seven responses. The number one concern noted in that survey was downtown parking and in particular the general interest in ending the reverse-angle parking pattern downtown. Due to these concerns, the town staff cannot recommend reverse-angle parking in recognition of the continuing use of golf carts which do not require a large parking area.