A report in The Hill says that a group of NFL players have requested that President Donald Trump issue a blanket pardon for nonviolent drug offenders, responding to the president’s suggestion that protesting players recommend those they felt had been treated unfairly by the criminal justice system. 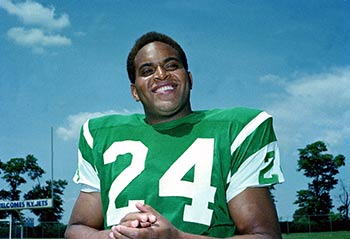 Cape Charles’ Johnny Sample. He decried racial injustice in an era when there were relatively few black players and when those who spoke candidly risked being labeled militants and troublemakers. He confronted team owners about perceived inequities in pay. (Associated Press Photo)

“President Trump could help,” they wrote. “He could use his powers, including the clemency power, to make a real dent in the federal prison population.”

For the first time, there appears to be something positive happening in regards to the NFL kneeling controversy. Trump has already expressed a desire to reform the prison system to reduce unnecessary incarceration and now the players used this opportunity to bring forward a request that could work toward that same goal. This could be the beginning of useful collaboration, civil dialogue, and mutual respect between the president and NFL players who are advocating for social justice issues.

Trump asked the players to submit some names to be considered for pardons. The players, however, felt that simply pardoning a few individuals wouldn’t solve the problem.

“But a handful of pardons will not address the sort of systemic injustice that NFL players have been protesting,” the op-ed read. “These are problems that our government has created, many of which occur at the local level. If President Trump thinks he can end these injustices if we deliver him a few names, he hasn’t been listening to us.”

The players commended Trump for pardoning Alice Johnson, a 63-year-old woman who was serving a life sentence for a nonviolent drug conviction, but asked for a more comprehensive solution. Here’s what they want:

● A blanket pardon for nonviolent drug offenders who have already served long sentences. “Imagine how many more Alice Johnsons the president could pardon if he treated the issue like the systemic problem it is, rather than asking professional football players for a few cases.”

● The release of any drug offender over the age of 60 whose conviction isn’t recent. “There is also a systemic problem in federal prison involving the elderly, who by next year will make up 28 percent of the federal prison population. Releasing these prisoners would pose little to no risk to society.”