After being alerted to complaints regarding Rep. Scott Taylor’s social media behavior, Leslie Mehta, a legal director for the American Civil Liberties Union of Virginia sent a letter to the  congressman asking that he stop violating his constituent’s First Amendment rights.

According to the ACLU, several of Congressman Scott Taylor’s constituents complained that, “they were blocked or had their comments removed from Taylor’s government-sponsored social media, including his Twitter and Facebook pages, even though their comments didn’t contain any profane, threatening, or discriminatory language. We sent Taylor a letter explaining how his censorship of opposing viewpoints in a limited public forum violates his constituents’ rights to free speech.”

The ACLU also noted on their website that “based on the number of followers and activities, Taylor seems to be using his unofficial Facebook and Twitter pages as the main platform to communicate with his constituent, discussing voting decisions, policy, and descriptions/photos of public appearances in his official capacity as a Congressman. It’s also unclear whether the congressman uses governmental resources to maintain his unofficial pages, which would be in violation of the House Ethics Rule.”

The Full Letter can be read here. 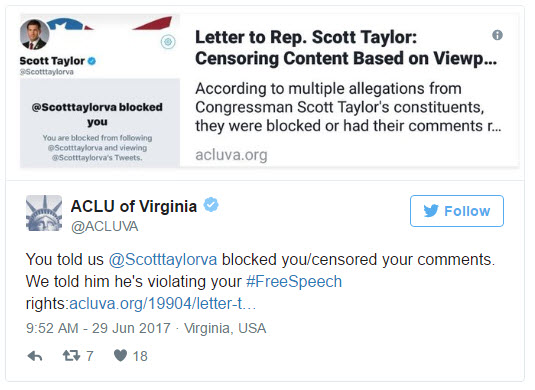