VIRGINIA BEACH — The Virginia Aquarium and Marine Science Center and its Stranding Response Team releasedd five rehabilitated turtles back into the Atlantic Ocean.

Four of the five (Wisteria, Honeysuckle, Captain, and Poppy) were Kemp’s ridley sea turtles and all four were inadvertently hooked by fishermen.

Also released was Drake, a Loggerhead who was found “cold-stunned” in the Chesapeake Bay on New Year’s Day.

The Kemp’s ridley is the most endangered of all sea turtle species. Efforts to save this turtle began in the 1960s and have continued to today. Since those efforts began, much has been learned about the Kemp’s ridley. Many more questions remain unanswered.

The Kemp’s ridley has always been a mystery. Sailors, explorers, and fishermen had seen other kinds of sea turtles coming up to nest on beaches in various places around the world but it seemed no one had seen a Kemp’s ridley nest. Some thought it might not even be a species. They suggested it was a hybrid, an infertile offspring of two other species. But when fishermen caught some Kemp’s ridley sea turtles with eggs inside them, the riddle deepened. If these turtles were a separate species, where did they nest?

In 1951, the first published record of a Kemp’s ridley nesting anywhere in the world was submitted by J.E. Werler. The turtle was seen nesting in 1948 on what would later be designated as Padre Island National Seashore.

But there were thousands of Kemp’s ridley turtles out in the Gulf of Mexico at that time. Where did the majority of them nest? Finally, in the early 1960s, Dr. Henry Hidebrand from Corpus Christi, Texas, came upon some home video footage that would solve the mystery and launch an international campaign to save a species.

Architect Andreas Herrera traveled between the U.S. and Mexico regularly in the 1940s. He had his own small plane and usually flew along the coast. He had heard rumors that hundreds of turtles sometimes crawled up onto one of the beaches he flew over. He was interested in seeing these turtles, and started taking a video camera with him on his trips in case he ever saw them.

One summer day in 1947, he looked down as he flew over an area in Mexico called Rancho Nuevo and saw a beach covered with turtles. Excited, he found a place to land his small plane, got his video camera, and captured the turtles on film.

That video footage wasn’t discovered by the scientific community until the early 1960s, when Dr. Hildebrand saw it. Scientists were amazed – nothing like it had ever been seen. Thousands of sea turtles were on the beach, digging holes and laying eggs. There were so many turtles, some even dug up the eggs of others as they laid their own. The scientists estimated that 40,000 female Kemp’s ridley sea turtles had come ashore to nest on that one day on the 16-mile stretch of beach at Rancho Nuevo (Hildebrand 1963).

Finally, the mystery was solved and the nesting grounds of the Kemp’s ridley became known to the scientific world. But with the good news came the bad: this species was and still is in serious trouble.

The 1947 film footage taken by Andreas Herrera showed the incredible mass nesting of tens of thousands of Kemp’s ridley sea turtles on the beach at Rancho Nuevo in Tamaulipas, Mexico. Unfortunately, it also showed mass destruction. Scientists reviewing the footage in the 1960s saw people taking the turtles’ eggs as they were laid and loading them by the millions into trucks. Some of the nesting females were also taken. The scientists estimated that 90% of the turtle nests were destroyed the same day they were laid.

If 90% of the nests laid were being destroyed, how long could the species survive? How long had this wholesale destruction been going on? Conservationists and scientists traveled to Rancho Nuevo and found the turtles were still nesting each year but had already declined dramatically since the film was taken years earlier. They appealed to the Mexican government to stop the wholesale destruction that was still taking place.

In 1966, the Mexican government took action. They passed legislation protecting the beach at Rancho Nuevo and brought in guards to stop the taking of eggs and turtles. Despite these protection efforts, the number of Kemp’s ridley nests found each year continued to drop. By 1985, only 702 nests were found worldwide the entire year. 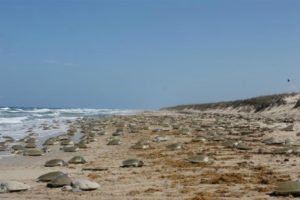 In the 1970s, the U.S. joined efforts to save this species. At the time, almost all known nesting of Kemp’s ridley sea turtles was occurring at Rancho Nuevo. Nearly all Kemp’s ridley eggs were literally in one basket! What if a hurricane, oil spill, or other disaster wiped out that beach? The species was very vulnerable. The situation was dire.

In 1974, the National Park Service proposed re-establishing a nesting colony at Padre Island National Seashore (PINS). The seashore is part of the native nesting range of the Kemp’s ridley and offers long-term protection for the turtle, its nests, and its nesting habitat. Boosting nesting at PINS would help to re-establish a nesting colony at the northern end of the Kemp’s ridley historic nesting range at a protected area in the U.S. where nesting had previously occurred. It would also provide safeguards against species extinction.

In 1978, agency officials from Mexico and the U.S. and conservationists agreed to attempt to re-establish a secondary nesting colony at PINS to help save the species. They formed an international, multi-agency partnership and established the Kemp’s Ridley Sea Turtle Restoration and Enhancement Program (KRREP). The National Park Service led development of an action plan for the KRREP. The goals of th eplan were to re-establish a Kemp’s ridley nesting colony at PINS and to protect nesting turtles, eggs, and hatchlings at Rancho Nuevo (Caillouet et al. 2015, Shaver and Caillouet 2015).

This project was based on the theory that sea turtles imprint to their natal beach and that, as a result of this imprinting, adult females return to the beach where they hatched to lay their eggs. This theory was unproven at the time, and no project of this magnitude had been attempted before. But the Kemp’s ridley was on the verge of extinction, and bold actions were needed to save the species.

Conservation efforts to save and recover the Kemp’s ridley have continued and expanded over the years since the Imprinting and Headstarting Project ended in 1988. In Texas, organized patrols to find and protect Kemp’s ridley and other sea turtle nests are now conducted not only at PINS but also in many other areas along the Texas coast. Through these programs, conducted by the National Seashore and many partners, Texas beaches are monitored each summer and any nesting sea turtles or nests found are protected. In Mexico, nest detection and protection programs that began at Rancho Nuevo have also increased and expanded to include most of the species nesting range in Mexico.