Prior to this Tuesday’s regular meeting of the Board of Supervisors, a resolution was drafted which would have allowed the county to convey a section of the property, owned by the county but in Cape Charles to Eyre Baldwin and Southport Investors for the price of just $10. The property was conveyed to the county by Cape Charles for use as a right of way in 1996. According to Baldwin, the Town of Cape Charles was in support of the deal. The necessity of the conveyance apparently has to do with the Cape Charles Yacht Center being able to move large vessels across the road. If the road were to remain public, that would not be allowed.

During the presentation, the BoS, seeming to fall all over themselves, fawned over Mr. Baldwin’s activities in Cape Charles. Chairman Murray asked if this conveyance would help create jobs and if it would help create jobs specifically for former Bayshore workers. Baldwin affirmed that it would and that there were already several working there now, apparently cleaning up debris.

“I think it’s great. You are one of the few people spending money in the county, and I for one appreciate that, especially since it happens to be in my district,” Supervisor Coker said. “I really say I support this, I just want to be clear about this.”

However, despite the effusive praise, Supervisor Coker did not recognize the restriction in the deed to Northampton County, unless the Board plans on approaching the Town of Cape Charles to rescind the restriction the town placed in the Deed which will provide Southport additional property for the agreed amount of $10.00.

This backroom deal would have been shoved through unless, during public comments, Granville Hogg had not stepped in with a counteroffer. As Hogg began the public comment, Eyre Baldwin commented, “Just keep it honest.”

Hogg’s sudden counter sent the board reeling for a response, especially when confronted with the optics. Getting testy, Murray said, “So what is your point Mr. Hogg? The resolution is not final until I sign it.”

“Does the Board intend to accept any additional proposals?” asked Hogg.

Murray responded angrily, “This is a conveyance. It is not an auction. You were on the board for four years you should remember that. This is a piece of property we own…we can convey it for a dollar, or for anything.”

Hogg then told the Board that he had a proposal from The Cape Charles Seafood Processors and submitted it to the Board. “The question is are you going to isolate what Southport does from any other business opportunity on that side of the harbor…Southport will control the south side of the harbor.” Essentially, Hogg questioned if it is the Board’s intention is to create a monopoly at the Cape Charles Harbor.

At this point, Mr. Baldwin moved to the podium. Chairman Murray did not tell him to sit back down but instead allowed him to speak.

“The truth is, he (Hogg) is incapable of being honest, with any project that we do,” Baldwin said.

Baldwin noted that the main reason for obtaining the property was due to the infrastructure already in place (without it, Southport would have to construct another industrial road parallel to the existing curve, which could be at least another 1/2 mile of paving).

Murray then asked if this would conflict with the “Front Street Project”.

“Front Street is on the other side…Granville always comes in with this late night and they’re always lies,” Baldwin said.

County Attorney Leatherbury advised the Chairman that the counteroffer, and as well as the standing offer could be discussed in closed session. Chairman Murray agreed and said,  “it is the first he has ever heard of it (counter proposal).”Supervisor David Fauber added comments that bikers and hikers utilize the road to get to the park.  Baldwin agreed and told the Board that he has already been working with the town, expanding the trail from Bay Creek, and tying it in with the existing heritage trail. “But once you start activities, you’re not going to want people going through there…they’ll going right through your operation,” Farber said.

“Or you could re-route them,” Chairman Murray said.

Chairman Murray then asked if Mr. Baldwin would be willing to pay more for the land.  “Yes we are,” Baldwin said, and added that the original offer, which was $50,000, 5 times the Assessed value of $10,000, still stands. “I don’t know where the $10 Granville is talking about comes from,” Baldwin said.

Janice Williams, Deputy to the County Administrator said that for the resolution draft, they have to stick any number in there, but it can change before the resolution passes and is signed.

Editor’s Note: For a number, why not use $12 million so that we can repair the High School?Chairman Murray noted that he would like to get that amount in the resolution. The Chairman then sends the Board to Closed Session.When the Board returned, Chairman Murray again asks Mr. Baldwin if will pay for the property.  Baldwin answers yes.The resolution to convey the property for $50,000 passes unanimously. 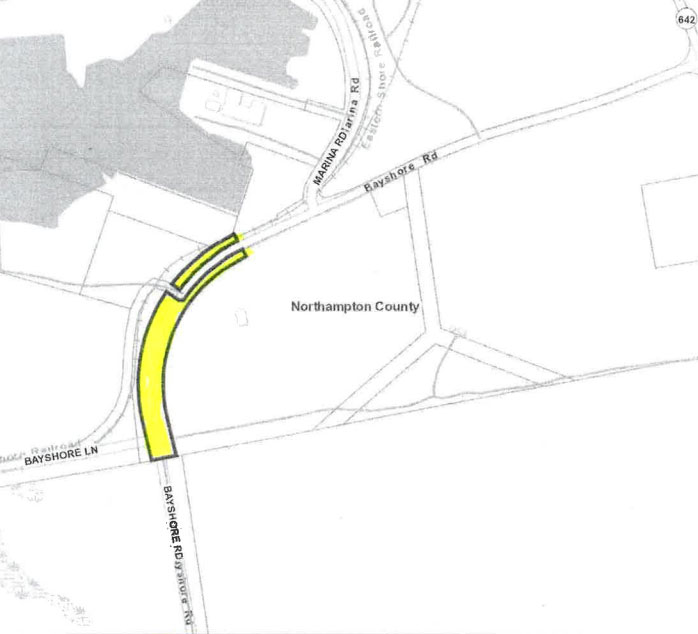 Section being conveyed to Southport