Mariners are requested to route around this area or transit through it at 10 knots or less.

Mariners are requested to avoid or transit at 10 knots or less inside the following areas where persistent aggregations of right whales have been sighted. Find out more about ship strike reduction efforts. 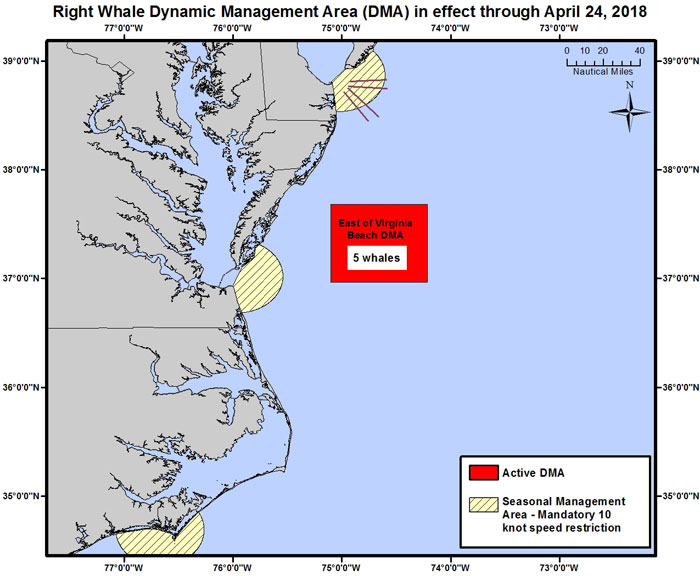 Northeast of Virginia Beach, VA — In effect through April 24.

The year 2017 was devastating for North Atlantic right whales, which suffered a loss of 17 whales–about 4 percent of their population–an alarming number for such a critically endangered species with a population currently estimated at about 450 animals.

In August 2017, NOAA Fisheries declared the increase in right whale mortalities an “Unusual Mortality Event,” which helps the agency direct additional scientific and financial resources to investigating, understanding, and reducing the mortalities in partnership with the Marine Mammal Stranding Network, Canada’s Department of Fisheries and Oceans, and outside experts from the scientific research community.

On January 22, the first right whale mortality of 2018 was spotted off the Virginia coast.

Download the Whale Alert app for iPad and iPhone

Acoustic detections in Cape Cod Bay and the Boston TSS

Send a blank message to receive a return email listing all current U.S. DMAs and SMAs.

Details and graphics of all ship strike management zones currently in effect.

Reminder: Approaching a right whale closer than 500 yards in a violation of federal and state law.