In Town Manager Brett Manuel’s weekly report to Council, he noted, somewhat cryptically, that Staff is in discussions regarding the Cape Charles by the Bay website with the Town Attorney. Given The Cape Charles Wave, LLC his filed a letter and invoice with the Town, requesting payment for the last two quarters totaling $2,650.00, discussions with an attorney seems prudent. On the contract the Town signed with Wave LLC, there is a provision allowing it to cancel for any reason with ‘30 days’ notice. Reviewing the contract (see full contract at end of this article), it appears that after 4 months the contract continues in force. Rather than “cancel” the contract, the Town instead issued a “stop work order.” Reviewing the document, a “stop work order” is not even a provision of the contract. More confusingly, stop work orders are more commonly issued by the code enforcement officer, not the town manager for a contract. An example might be that the Town should have issued a stop work order to the Hotel Cape Charles after it discovered that they were building outside the Historic District Review Board’s Certificate of Appropriateness, as well as violating building permits that had been issued.

This is an actual screen shot that came up while searching for events over the summer.

Given the facts, the Wave, LLC should be paid under the terms of the contract until such time as it may be “cancelled”. From a fairness perspective, the Wave, LLC is incurring lost opportunity costs by having to remain ready to perform the work at any time as the “stop work order” may be lifted (and the language of the order makes clear that it is only temporary). Since the Southerns have committed to do the work of the Cape Charles by the Bay Website, they cannot seek other work that might interfere with CCBTB. Also, they have lost the opportunity to sell all the ads that could have come from vacation rentals since they may interfere with the By the Bay website sales.
Fundamentally, there is no provision in the contract to deny payment in event of a “stop work order” which was issued by the town on June 22. Under the contract, if the town no longer wishes to receive services from Cape Charles Wave, LLC, it may terminate the contract without cause 30 days following due notice. The “stop work order” clearly is not a termination order, given that it uses the phrase “during the period of work stoppage,” indicating that the stoppage is temporary.

Since receiving the “stop work order”, Mr. Southern has told the Mirror that he has communicated twice with Town. Both letters are a matter of public record. Both times he asked that Cape Charles Wave, LLC, be allowed to continue to perform the work the town contracted it for. There has been no response to both communication, and the contract remains in force.

Note: This appears to be the town manager’s mode of operation. He has refused inquiries from the Mirror on other occasions, and has most notably been mute regarding the status of the Cape Charles dolphin which was broken after town crews were given orders from 2 Plum Street to move it.

A former member of the Cape Charles Business Association told the Mirror that it had been the goal of the CCBA to take over the website, while having the Town pay for it using its ‘Public Relations’ charter to justify the taxpayer outlay. However, due to what can only be termed incompetence on the CCBA’s part, they discovered that, due to the nature of their tax exempt status, they were ineligible, at least until they could work to get that status changed. However, there is one clause, the Anti-Collusion clause that may prevent this from ever happening:

The argument could be made that there are several members of staff, as well as on Town Council, that fit this bill. Given the somewhat cozy relationship CCBA President Follmer enjoys with the Town, and the way the initial contract was handled, it creates the appearance that not only are lines being blurred, but have been actively crossed, as was noted in Manuel’s weekly update to Council, “After Andrew Follmer’s presentation at the last council meeting staff has tried to find ways to work closer with the businesses to promote the success of the Town.” Certainly, government entities interact with businesses on certain occasions, as was illustrated by the Illinois Governor Blagojevich. At which point ‘working together’ becomes collusion is an interpretation best left up to the State police.

Despite the influence Follmer and the CCBA appears to have in the back rooms of 2 Plum, the town needs to come clean, and honor the invoice submitted by The Cape Charles Wave, LLC. Freedom of Information requests reveal that the town has spent over $90k in the last few months on legal fees. In this case, it may be a little cheaper to eat crow, rather than to continue to exercise that retainer.

Cape Charles by the Bay Contract 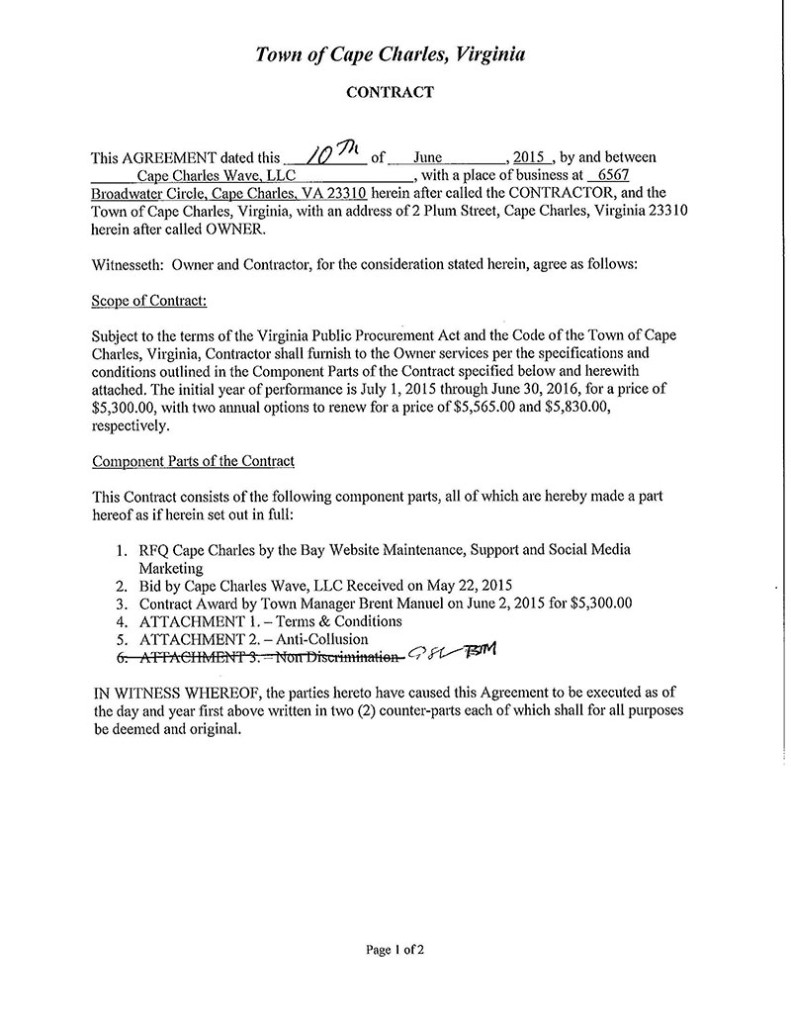 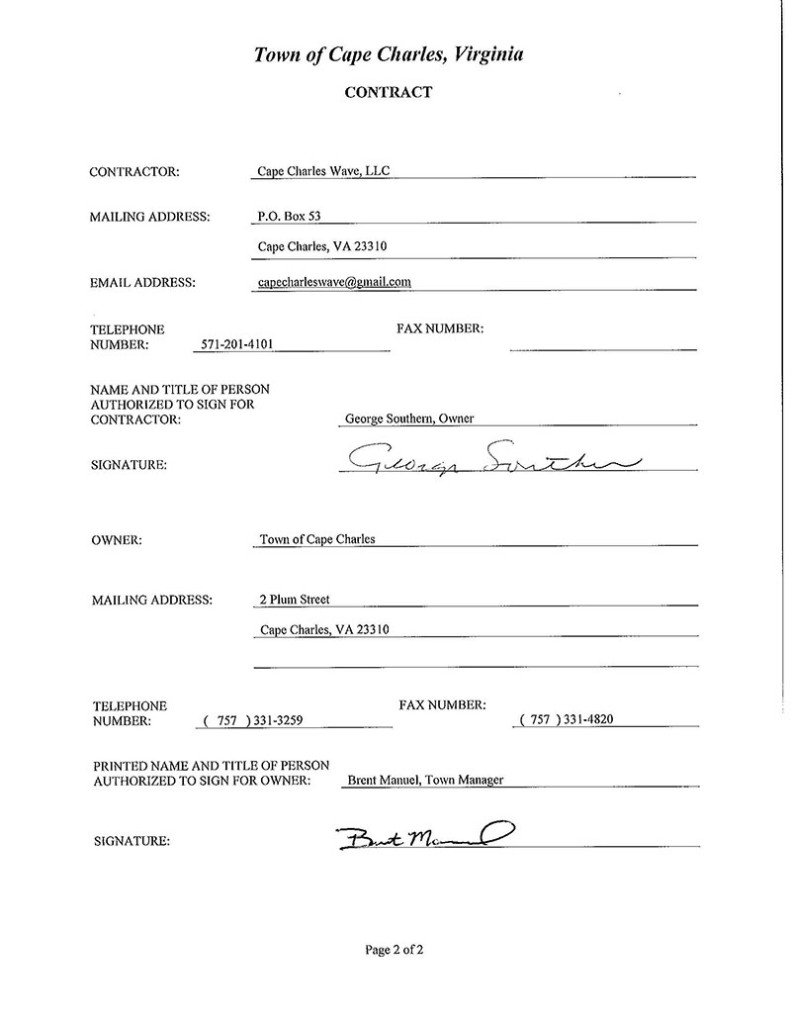 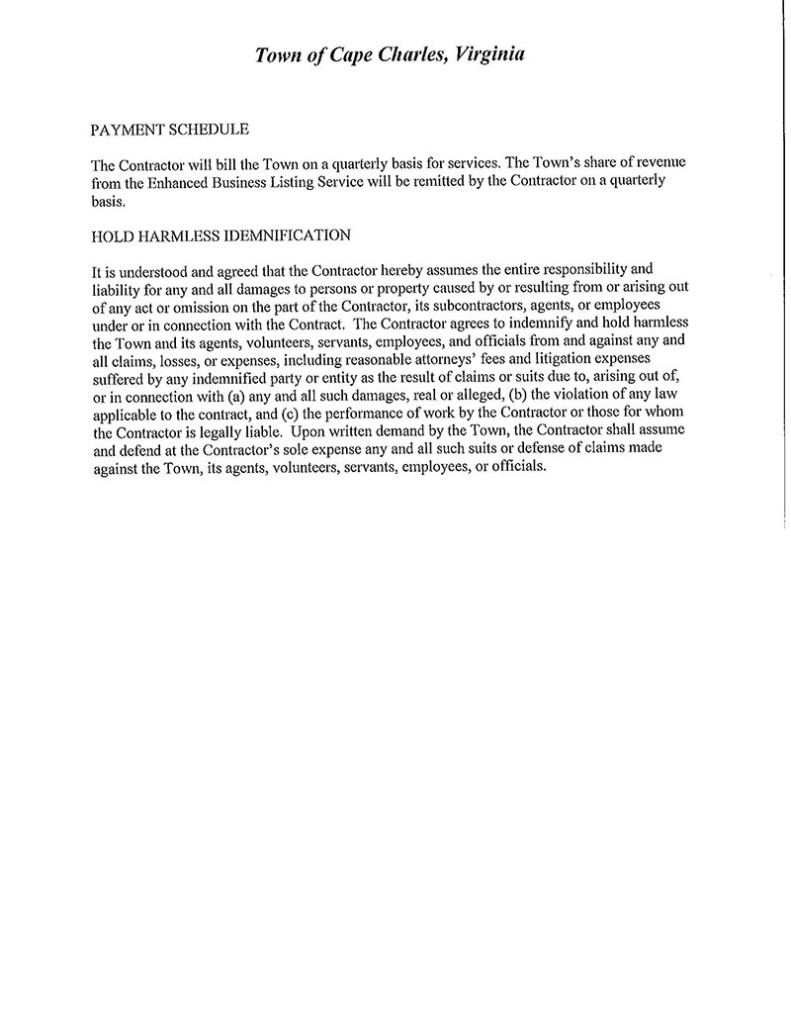 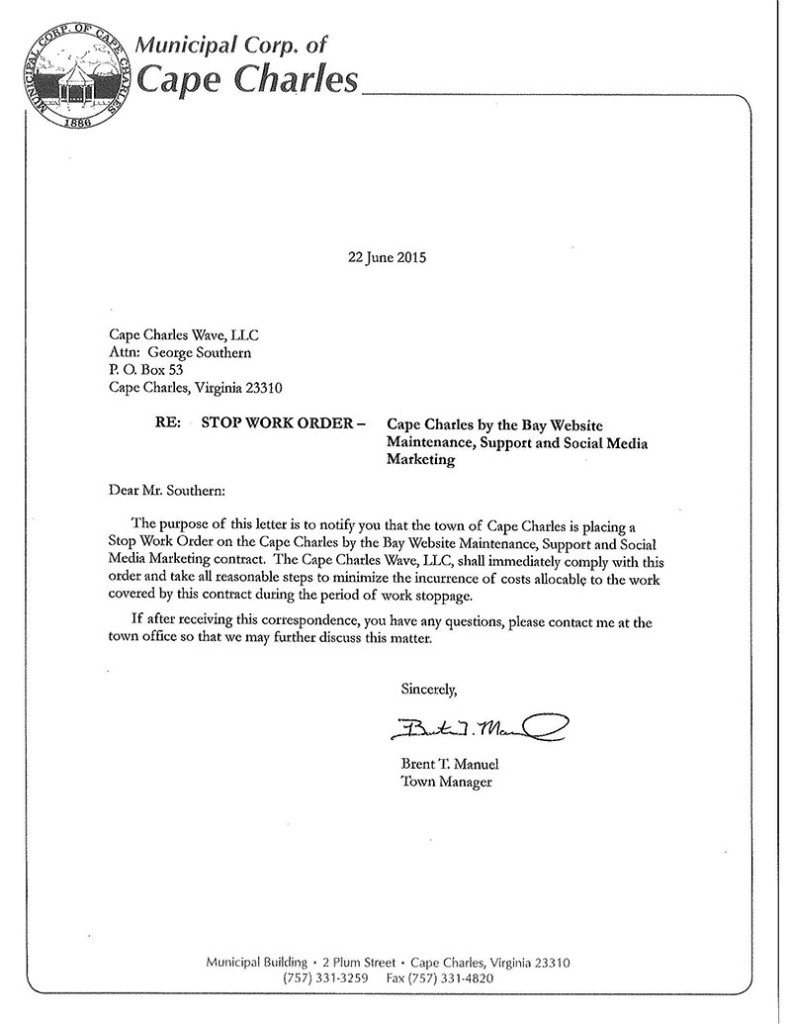