According to a report by the nonprofit First Street Foundation, housing values in New York, New Jersey and Connecticut dropped $6.7 billion from 2005 to 2017 due to flooding related to sea level rise. Combined with their prior analysis of 5 southeastern coastal states with $7.4 billion in lost home value, the total loss in 8 states since 2005 has been $14.1 billion.

A new tool called Flood iQ, allows people to look up individual properties to see how their values are influenced by flooding. The Norfolk area shows up as a very vulnerable area, where the main access road to the largest naval base in the world has been seeing frequent tidal flooding.“The water is coming up on the streets on a very regular basis [in Norfolk],” First Street says. “These homeowners are extremely exposed to it now…We can harden cities and allow them to thrive on the coast,” but if we don’t take sea level rise and tidal flooding into account, “the problem is only going to get worse.” 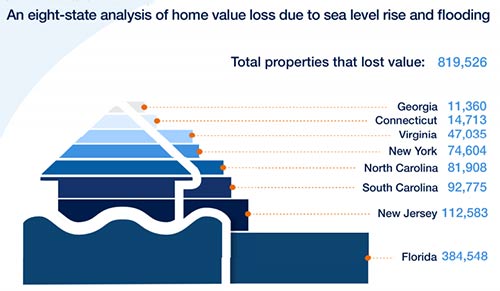 The new report comes as other studies are starting to hone in on the present-day changes in value of vulnerable homes, rather than just projections. For example, research to be published in the Journal of Financial Economics shows that homes exposed to sea level rise already sell for about 7% less than identical homes — with the same number of bedrooms, property and owner type — unexposed to flooding.

How does this effect Cape Charles, and the Vacation housing market?

So-called “sophisticated buyers,” which are buyers of second homes or homes for investment purposes, are factoring in a steeper discount rate due to rising sea level concerns than buyers who then live in those homes as their primary residence and rely on that equity for retirement income.

Dr. Carl Hershner, the director of the Center for Coastal Resources at the Virginia Institute of Marine Science (VIMS) says, “We are entering into an area of changes in our system that we have no model for. We’ve never seen these kinds of changes before.”