A dolphin that stranded itself on the beach at Sandbridge on Sunday night was euthanized by the Virginia Aquarium Stranding Response Team.

Team members were sent to the beach to assess the animal’s condition and decided to put the dolphin down, spokesman Matthew Klepeisz said. 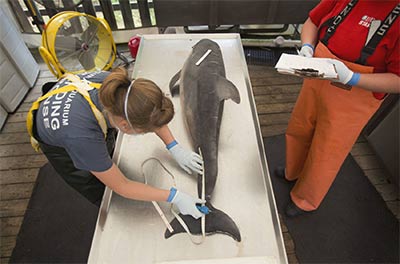 When the stranding team evaluated the dolphin, program coordinator Alexander Costidis said, it had rapid and shallow breathing and an irregular heart rate. Its eyes weren’t tracking activity properly. Costidis said the animal had skin lesions, suggesting an active poxvirus that pointed to some level of immune system compromise.

Matthew Kepeisz told the Mirror, “The dolphin was stranded in Sandbridge late Sunday evening. Our team received notification and headed out for assessment. After reviewing the animal’s condition and the conditions around it, our team made the decision that the most humane option was to sedate the animal. After conducting the necropsy on the stranded dolphin, our team determined that it had severe heart and brain lesions that almost certainly contributed to the stranding. It also had a heavy parasite load that may or may not have been related with some of the lesions.”

Rough surf conditions likely pushed the dolphin to shore, where refloating it was not considered a humane option since drowning or shark attacks were probable outcomes.