The Cape Charles Planning Commission met on Tuesday, November 3, to continue its work updating the Comprehensive Plan. With the Town still breathless from its latest hiring spree, the Planning Commission made sure to provide ample room in the Comp Plan for them to make further purchases to accommodate the burgeoning staff. On page 54, the Plan notes that obtaining properties at the historic Rosenwald School, as well as the Schlegal property, are listed as options. Expanding 201 Mason for Town offices is also mentioned. In the same section, the Commission made sure to put the final dagger in the heart of a Community Center for underserved members of the Lower Shore, by changing the language from definitively planning for a community center, to “improving the Civic Center for community activities.”

Along those lines, Natali noted that since there had never been any discussion regarding building basketball courts in Cape Charles, they should look at removing that language from page 61, which lists items earmarked as part of the Capital Improvement Plan. Discussion on removing Item 11 on the list, “Basketball Court, including fencing”.

The Commission held a public hearing for an application for Conditional Use Permit for building a set of residential dwelling units above the ground floor at 207 Mason Avenue. The exact number of citizens that appeared for the hearing could not be determined, but it was estimated to be close to 0. This is not 207’s first time at the dance. After being purchased in 2010, the property received a conditional use permit, as well as approved building permits ( The most recent conditional use permit was granted by Town Council on December 9, 2010). However, no construction has ever begun, and the original conditional use permit and all building-related permits have since expired. The applicant is in the process of re-applying through the process from square one. Staff report notes, “Article III Section 3.6.C allows single-family and multi-family residential dwelling units above the first floor as a conditional use in the Commercial-1 district”. The original plans that were submitted during the original permitting process were re-submitted for the latest application.
Town Planner Larry DiRe started, “After reviewing the application, I can’t find any reason not to go ahead and approve this application. That is my recommendation.” 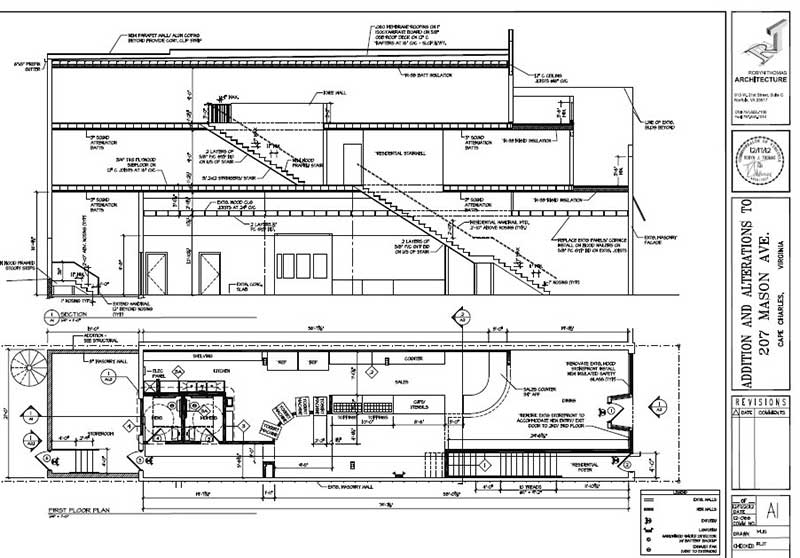 Commissioner Natali asked DiRe, “If I remember correctly, there was a stop work order placed on that property, is that correct?”
“Yes,” said DiRe. “Zoning did put a stop work order due to the fact that they were not building the walls properly.”
“So, that will be taken up again?” asked Natali.
“Oh yes. The permitting process will start over and code enforcement will require that the walls are built, so as to be structurally correct,” DiRe said.
“Usually a structural engineer will be brought in to remedy the walls issue,” Commissioner Bucholz added.
The Commission approved the Special Use Permit.