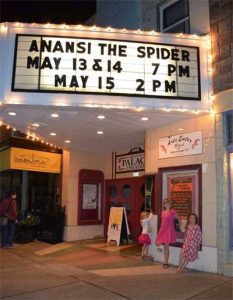 After weeks of speculation, the Board of Directors for Arts Enter Cape Charles has made a decision on what to do with the Historic Palace Theatre. Clelia Sheppard made an offer to take possession of the theater, along with the existing financial obligations. This news came as welcome relief for members of the performing arts community, who have been worried about a future that might have meant giving up the dance studio as well as access to the stage for rehearsals.

The current board found themselves at their wits end about how to meet the obligations required to keep the doors to the Palace open. While they refinanced the loan on the building last year, that still did not do enough to keep Arts Enter from teetering on the edge of extinction. Much of this dilemma was due to the organization attempting to function without an executive director. In other words, for the last year, they have been aimless and rudderless. Arts Enter did try, but the two candidates that were hired did not pan out. There is currently an acting  ED, however this person works full time somewhere else, and rarely has more than a couple of hours a day to devote to the task. That also means there has been no one in the office to take calls during the day, which has caused some consternation, especially for parents trying to plan vacations around the summer camps.

Programming has truly suffered. Aside from adding movies on Friday evenings, events have been few and far between. The inability to front load events during the tourist season, also hurt revenue. Given this situation, the board began negotiating with Erin Hardy of Cape Charles, who wanted to buy the building and return it to its days as a movie theater, running first run films. On the surface, this seemed like it could solve many of the problems, including lack of programming. To the board’s credit, Hank Mayer and Cela Burge were hard negotiators, demanding that the dance and theater programs, as well as the summer camps remain untouched. Those negotiations began to uncover several flaws in the plan, and even as they evolved, it soon became clear that the Harvey offer would not be beneficial to Arts Enter, the performing arts community, or the Town of Cape Charles.

The possibility of losing the theater and the stage was also a wake-up call for Ms. Sheppard, who, along with her mom and family, has poured her life into the arts on the lower shore, and the Palace Theatre. Sheppard decided to come out of retirement to once again give the Palace some stability. According to Ms. Sheppard, one possibility is to separate the building from the Arts Enter organization, creating its own 5013c. This will accomplish several things, not the least of which is opening up the possibility for a larger pool of grants; it will also allow for a board whose main mission is the health and well-being, both physical and financial, of the Historic Palace Theatre. This will also be good for Arts Enter. With the theater off its plate, it can now focus on the health of the dance and theater programs, and hopefully start working towards solving the programming dilemma.

“We want to get back, to the wonderful things that we do,” said Sheppard. “We want to make those upgrades that will bring it back to its place as…as a place of beauty and the arts, a place that continues to put on wonderful shows.”

This Friday at the Lemon Tree Gallery, while the great Thelma and Erica Peterson played music, there was a feeling of relief, and exhaustion; there’s still a lot of work left to do, but it’s good work. With summer here, and Experimental Film Virginia just around the corner, the future now seems full of hope rather than despair and the promise of lost dreams and unfulfilled potential.