You are here: Home / Archives for Local Music 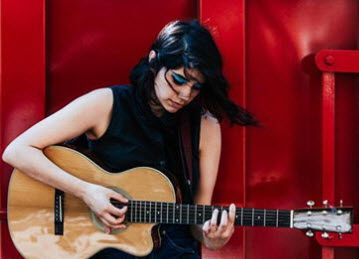 The Shore Made Music Festival is back. The 2nd annual version at the Historic Onancock School is Saturday June 17th from 1:00-10:00 pm.

The festival features the brilliant Angelica Garcia just off the release of her debut album, “Medicine for Birds”.

Friday March 3, 2017: Opening of Spring Exhibit “Entangled” featuring sculptor Christine Harris and artist/illustrator Julia Gabrielov. Free and Open to Public. 6-8 PM
Lemon Tree Gallery & Studio is proud to present the opening of our Spring Exhibit “Entangled” featuring the thought provoking work of sculptor, Christine Harris and the enchanting work of artist/illustrator, Julia Gabrielov. During this spring exhibition (March 3 through May 28), we will be presenting activities and lectures related to the environment which is deeply rooted in Christine and Julia’s work.
Please join us for complimentary refreshments as we welcome and celebrate Christine and Julia and their art that invokes powerful storytelling.

Saturday March 4, 2017: Bold Moves with Bethany Adult Class 12-4 p.m.
Cost: $50 materials included
Bethany’s classes in style and composition offer an outlet for your inner child. Her signature vibrant colors and full canvas is teeming with Eastern Shore life. “I’m a seasider and when I look at the marshes I don’t just see green and mud. I see bubbles rising to the surface, snails moving along the blades, crabs scuttling…I see life everywhere I look and life is color. That’s why I use so many bright colors in my paintings because it’s the way I have to fill it all in.” Come paint with Bethany and turn winter drab into fab!
Call or email to register: 757-331-4327
team@lemontree.gallery END_OF_DOCUMENT_TOKEN_TO_BE_REPLACED

Special to the Cape Charles Mirror by Jose Alavardo. Jose is a full-time student at Eastern Shore Community College. He also works 35+ hours a week in the college maintenance department. When he graduates from the community college, he plans to attend Old Dominion University and major in Health Services Administration. He is also interested in journalism and hopes to write for newspapers and magazines in the future.

Sometimes to reach our destination, we have to sacrifice and accept a few detours along the way. This simple truth is especially true for Angela Owens, who put off her own dreams so that others could realize theirs.

Angela Owens was born in Cape Charles in 1972, but she moved to Portsmouth, Virginia, where she attended school, graduated from Craddock High School and lived for 21 years.

After a fire tragically destroyed her home, she moved back to the Shore in 2000. She worked at the Sunset Beach Inn as a housekeeper and was also a cashier at the Shore Stop in Eastville. For the last 15 years she has been working as a Personal Care Assistant (PCA).

Angela is not just a hard worker, she is also the proud mother of three children. Love and education were always her top priorities as a single parent. All of her children graduated from Northampton High School. However, a high school diploma was not enough for Angela or her children. She made sure that all three attended college. Her oldest son, Adairius Williams, attended Virginia State University and graduated in 2012. He is now a 5th grade teacher in Carrolton, VA. Her daughter Keishalia Williams followed in her brother’s footsteps and is now a junior at Virginia State University. She is studying Business Administration. And her youngest son, Jovoski Williams, is a sophomore at Virginia Commonwealth University. He is studying anaesthesiology.

In 2007 Angela Owens wanted to return to school and enrolled at Eastern Shore Community College. However she found the realities of being a single mother, working full-time and trying to go back to college were just too much, so she put aside her dreams until her children’s futures were secure.

But now she says, “It’s my turn.” She has enrolled once again at Eastern Shore Community College. She wants first to get her Long-Term Care Assistant certificate and then her Licensed Practical Nurse degree. “The community college has been great,” she says. “The people, especially the faculty, make me want to learn and come to school. Everyone is so friendly and helpful. At first I was worried that I had been out of school too long, but that wasn’t the case at all. I love it here and I feel that I fit right in,” she says. “I think everyone who put their education off for a while, for whatever reason should think about going back to school. If I can do it, anyone can.”

Calling all craft beer lovers, the clock is ticking — are you in?
Welcome to Brew ‘N’ Que (Oysters Too!), a professional barbecue competition and craft beer festival at Sunset Beach Resort in Cape Charles, VA!

The two-day event features the best barbecue in the nation, oysters, a fine selection of craft beer with unlimited tastings, live music, kids’ entertainment and more!

Join us at The Jackspot at Sunset Beach Resort for a “People’s Choice” chicken wing contest and live music.

Saturday, Sept. 24, from 11:00 a.m. to 7:00 p.m.
Join us at the Sunset Beach Resort campground for a professional BBQ competition, craft beer and live music.

Experimental Film Virginia will hold its film premiere this Saturday June 9th at 7:00 at the Historic Palace Theatre. The Bayamo After Party follows immediately, and is walking distance from the theatre.

Music is by Guava Jam!

Sponsored by Cape Charles Yacht Center, this event is Free and open to the Public. Food and cash bar available.

Experimental Film Virginia is a two-week artist residency and festival where the production of short films, made on location, is coupled with art-soaked weekend events open to the public. Inspired by Eastern Shore culture and echoes of vintage Americana, EFV currently takes place in the town of Cape Charles, Virginia.

On July 2, Experimental Film Virginia will be hosting Art in a Barn, 242021 Seaside Road/Riverside Farm Road, at the Seaview Creek Farm event space where the lively tradition of gathering in barns is continued, transforming the space into a stage for dance, music, projection, community, and good food and drink. Special Guest Admiral Michael Malone. 6:30 pm.

There will be Bobby Seckers BBQ dinner for $20

On March 12th, Arts Enter Cape Charles welcomes Marcolivia, an award-winning violin and violin/viola duo to the Palace Theater in Cape Charles. The duo performs music from all styles and periods, including Folk Music and Salon/Virtuoso works, as well as Baroque music and works by 20th century composers.

Marc Ramirez and Olivia Hajioff have made violin and viola duo music the focus of their musical lives for the past 15 years, ever since they collaborated for both of their doctoral dissertations. They perform 30 concerts a year of duo recitals and double concertos with orchestras. In developing their repertoire over many years, Marcolivia has discovered a great love of folk-based classical music.

The Marcolivia Duo has been featured on NPR’s “Performance Today” and “Front Row Washington”, and is a regular guest artist at the Tokyo College of Music, Japan. They have performed for the Kennedy Center, Strathmore, Merkin Hall and Symphony Space, NYC, Federal Reserve Board in Washington DC, the Hungarian American Coalition at the Cosmos Club, and annually at the Phillips Collection.

Come out to the Great Machipongo Clam Shack, 6:30 till 8:30 Saturday November 21st. Grab a great seafood dinner and catch this original and thought provoking singer-songwriter.

Direct from the streets of Norfolk and supplied with fresh cuts and unheard originals, Chris Chandler and his guitar brings a night of Indie Introspection and reflection.

Guaranteed to bring you back home… to where you once belonged.

On Friday, November 13, 2015 the ESO Arts Center will host a rockin’ evening with some of the Shore’s top artists.The Shore Made Sampler with ESO Live! will host the totally groovin’ Groovers (formerly Mr. B’s Band), rockin’ rhythm & blues with Scott & Melinda, the all-time best Americana duo, Heather & Nathan, and one of my favorites, that rockabilly Eddy Dixon. ESO is located in Belle Haven, VA 23306, at 15293 King St. Admission is $10 and includes a light snack. Beer, wine & soda are available for purchase. Doors open at 7:30 p.m. Call 757-442-3226 for more information.