“He doesn’t get it, this is what it is all about. It is about that he did not ask for and get the permit that he knew he needed to have. And then when he got permits, he violated them. This whole issue is about permits and it is unfortunate that he does not understand that. And he stands up in front of us and tells us it is not about permits. It is shocking that his attorney has not told him it is about permits. Everyone acknowledges that there are clear violations going on. The owner was intelligent enough to know that he was doing something improper and yet everything went ahead anyway. I am concerned about this attitude of total disregard of what the rules are when everybody else has to abide by them. If this gentleman is given a free pass it sets a very bad tone for the entire community. This is a dilemma for the Board, we have something that has helped the area and is being used, possibly improperly as residence, which it is not zoned for, and a clear violation of permits and the rules that are set up in the County. We need to address that.” – RH Meyers, Northampton County Wetlands Board in response to Eyre Baldwin’s unpermitted construction in the wetlands at Salt Grove.

Mr. Baldwin also built a floating dock, new pilings and a gangway (ramp), and a concrete pad to the east has been constructed. The owner attempted to eradicate phragmites near the slab, and has added a geotextile base and covered it with shells. Disturbances to the wetlands did occur.

While there was a $7500 penalty for the action, the maximum the Wetlands Board could levy, to this point, the County has not received payment of the fine. 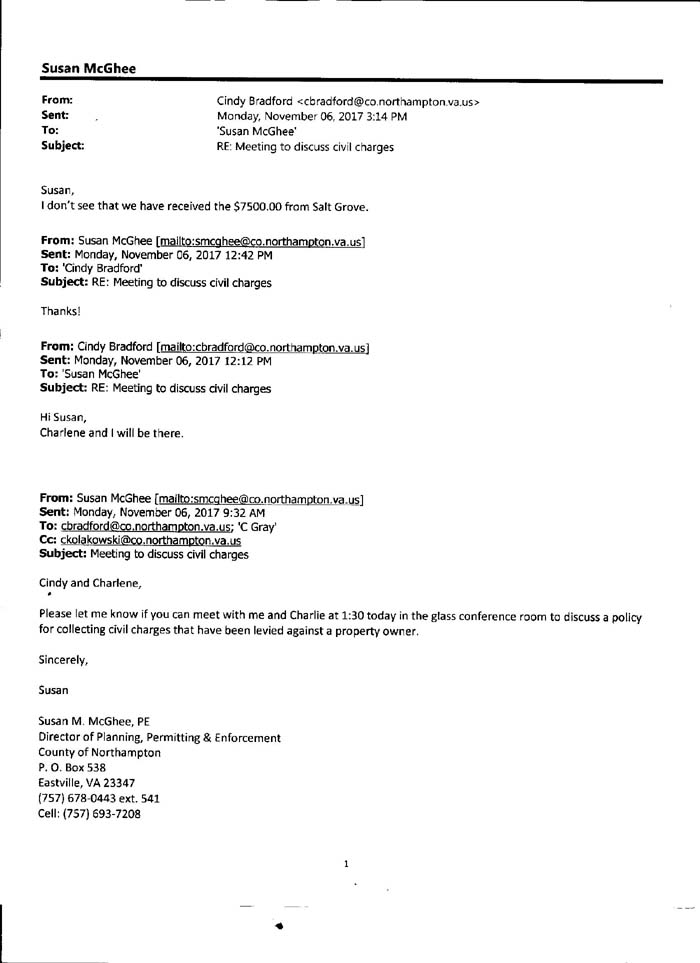 At Salt Grove, absurdity seems to hold no bounds. The structure had been used as an event/vacation rental, however the 2016 zoning ordinance removed that use, which prompted the owners to apply for a new use as a shellfish watch house, which was eventually approved.

An oyster watch house? Most watch houses were constructed in the late 1800’s when the state started leasing ground for oyster beds to the dominant shucking houses. They were manned 24/7, and the sentries were armed, tasked with protecting the beds from poachers. In some cases, entire families moved in to watch over the beds. That hardly seems like the case at Salt Grove. Whether or not there is even a bed worth watching in that location is debatable. The following email trail exposes continued non-compliance:

The fact that the county would not pursue further civil violations for the unpermitted work, and would then approve a use like an oyster watch house raises concerns. These concerns have been raised by District 1 Supervisor Granville Hogg on multiple occasions, but they have thus far fallen on deaf ears.

In the Mathai case, the county seemed willing to drop the hammer. Why is the Salt Grove developer allowed to walk away with a hardly a slap on the wrist? Why is there no consistency in penalties? If it had not been for a citizen following up, would there have been any attempt to retrieve the $7500 fine?