Several years ago, the grass roots community organization Old School Cape Charles (OSCC) was formed to work towards renovating the old high school that sits on the edge of Central Park, turning it back into a community center and sports complex. Former Mayor Dora Sullivan was instrumental in starting a bank account to begin the efforts. But a funny thing happened on the way to the forum. 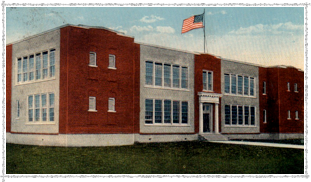 A little over a year later, the town announced that the Christian School no longer wanted the old high school (they were moving into the abandoned Presbyterian Church), and that Cape Charles had decided to sell the building to a Richmond developer for $10. OSCC was never notified of this arrangement until it was released to the public. At this point, OSCC went to the mattresses and began a fight to keep the school in the public domain.

The fight, in usual Cape Charles fashion, turned ugly. With its back to the wall, Old School Cape Charles adopted a burnt earth policy. At the core of the back-room deal was a windfall of historic tax credits that would be available to the developer. Via Federal and state rehabilitation tax credit programs, administered through the Department of Historic Resources, property owners are given substantial financial incentives for private investment in preservation of “historic” structures.

The more OSCC found out about the program, the worse it got. It became apparent that the tax credit program was in many cases nothing but corporate welfare and prone to abuse and scandal. It was the main driver in gentrification projects, not just in Cape Charles, but in places like Blackstone and Petersburg.

OSCC began a campaign to find out what DHR knew about the old school deal, and unleashed lawyers, letter writers and several in-depth FOIA requests.

While OSCC had contacted then State Senator Ralph Northam, it wasn’t until it started putting the heat on DHR that it received a response. Northam was sending a representative to meet with them. The consensus was that Northam was a Shore Boy, and he would come to Cape Charles and set things right for a town and county that has been historically underprivileged. Wrong.
While Northam’s rep agreed that the Old School project was at its heart a gentrification project, the reason for the visit was to convince OSCC into backing off the DHR in Richmond. OSCC was told in not so many words that the DHR was not the enemy, was an important asset to the state, and not to be messed with. It became clear that allegiances lie somewhere other than with the homeboys of Cape Charles.

Without support at the state level, OSCC realized it really had its back to the wall. Disappointment in Northam ran high, but the organization carried its fight to the courtroom with a long-shot bid to overturn the town’s decision to sell the school for $10. OSCC’s lawyer warned that the chances of winning were pretty much slim and none, and that turned out to be the most truthful and accurate statement relative to the whole debacle.

In the end, OSCC and the town expended massive quantities of political and financial capital in a conflict that hinged on giving away a property that at the time was assessed for close to a million dollars. The courts ruled in favor of allowing the old school deal to go through.

Fast forward to 2017. Mr. Northam is now a candidate for Governor, and Old School Cape Charles has faded into lore. Time heals some old wounds, but there is still some bitterness–especially in the voting booth.