In 2008, with the construction of a new Water and Wastewater Treatment Plant looming, the Town of Cape Charles embarked on a futile quest to obtain from Bay Creek, the current assigns to the Brown and Root Annexation Agreement, payment for their share of new plant, as per the agreement. While there were several months of back and forth between the developer and the Town, in the end, the whole matter was eventually dropped, and the full cost of building the new plant was assigned to the taxpayers.

The correspondence below from Assistant Town Manager Bob Panek to Town Council makes it clear that there was a firm belief that that based on the Agreement, Richard Foster and Bay Creek was responsible for the new plant. 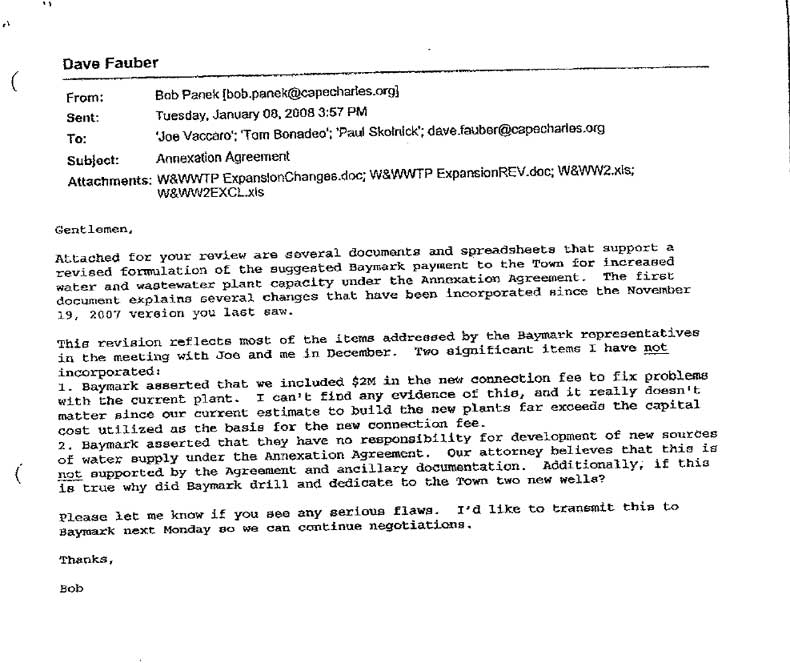 This response was sent to Mr. Foster:

Capacity issues had been a concern for some time. Brown and Root had concerns early on and began building pumping stations as a precaution. Oddly, while the town was working with large buildout estimates, it only built a new plant to the current capacity of the old one–250,000 gallons per day. However, as was stated in a State Water Control Board Enforcement Action in September 2010 (the town was completely out of compliance on many levels, including high levels of Enteroccci), per DMRs submitted to the DEQ, the inflow into the plant exceeded 250k per day for part of 2009 and most of 2010:

The Town’s deciding to build a plant to the same capacity of the old one was dubious; given estimates, and that the plant was already seeing capacity at 250,000, why would they decide not to expand? It also appeared that, according to legal advice and the reading of the Annexation Agreement, Cape Charles believed that the capacity argument was “patently absurd”: 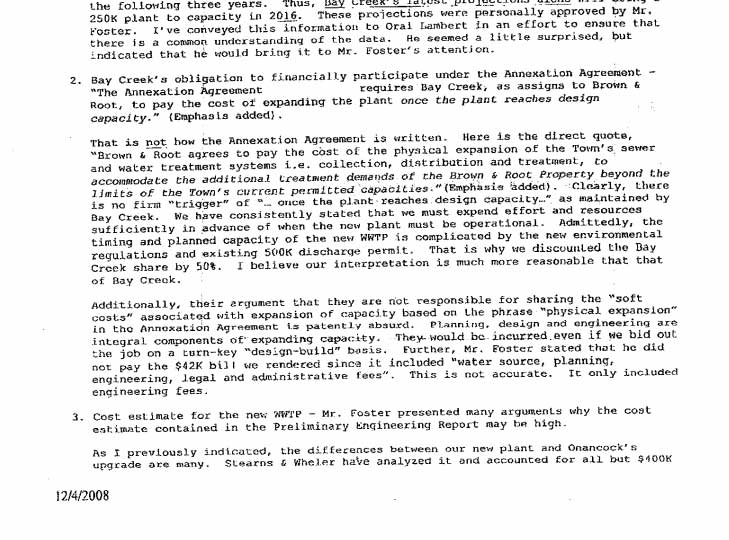 The Town did send this response to Mr. Foster: 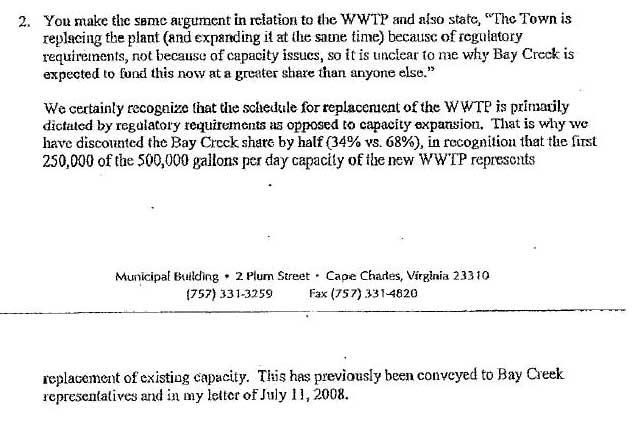 The Town had to create and reserve capacity based on Bay Creek estimates. If Bay Create estimated 3,000 or less Units and began to sell lots,  when was the Town supposed to ignore the Bay Creek’s changing estimates? Bay Creek claimed in Virginia Beach Court they had permits to build 3,000 residential Units and told the Members that was the Numerator. It was also the reason given as to why the home owners had no Board votes. Bay Creek, during this period was having difficulty keeping its story straight.

Why did Cape Charles drop its case, and not hold the assigns to Law No. 27, the Annexation Agreement?

Sources around at that time offer some insights. First, it was noted that while Joe Vacarro was the Town Manager, he was told by Town Council to stay out of the water and waste water issues, that Bob Panek would be handling it. Vacarro was relegated to a mere signatory on correspondence between the Town and Bay Creek. Why would the Town Manager not be privy to these dealings? Anyone that knows Mr. Vacarro would consider this a red flag. Vacarro is nobody’s fool, and he would have quickly picked up on an operation that was not 100% above board, so locking him out of the process appears to have been strategic. 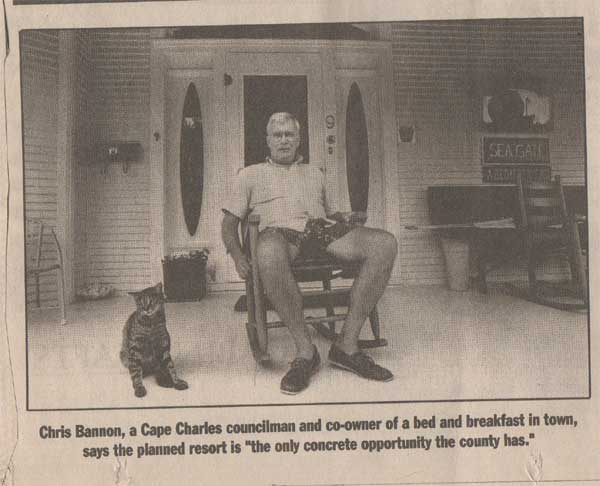 While the Town created the appearance of going after the Annexation Agreement, it does not appear that there was ever really any intention of following through. Members of Town Council believed that there was too much at stake. That is, by forcing the developer’s hand, and honoring the agreement, could have had disastrous effects on Bay Creek. The market had bottomed out, and consensus was that Foster was in trouble. Bay Creek was too big to fail, and if that meant letting the developer off the hook and spreading the financial pain of a new WWTP on the taxpayers, well so be it. If you talk to the Town, the reason they give is that the ‘capacity trigger’ which they say would have invoked the Annexation Agreement, was never reached since Cape Charles never increased capacity by building the new plant to only 250,000 gallons per day, the same as the old plant. The original assessment of ‘patently absurd’ still seems to apply.

The Webtide Regional Wastewater Plant in Cheriton, conveniently appeared as an alternative to the Cape Charles plant, and muddied the waters just enough to make Panek’s Stearns and Wheeler design seem practical.

This may seem like water under the bridge, except that all of this may have been in violation of Law No. 27. The Annexation Agreement does not expire, does not go away. It is a legislative act of the State of Virginia, and will remain so until the State changes it. There is no statute of limitations.