During a public hearing at the Nandua High School which dealt with DEQ first-time-ever pending permits for a poultry operation which gives the agency the ability monitor storm water that migrates from the facilities, questions to DEQ revealed that CAFOs operating in Accomack County have so far not applied for a groundwater withdrawal permits before the facilities were constructed. Part of the groundwater withdrawal permit involves modeling which is used to determine if the water withdrawal will create a cone of depression that might affect an adjacent fresh water supply. Concern is that since these facilities haven not applied for a permit, that modeling was never initiated.

CORRECTION: A reader sent this note to the Mirror, correcting inaccuracies reported in this article, “Couple inaccuracies I wanted to point out… 41 of the 83 farms have applied for permits already. Also the water control board has never had a poultry groundwater issue before them. DEQ is the only one that’s handled it and they’ve said they will start fining the remaining farms if they don’t apply ASAP. Also… This has been a known issue for 2 years that the groundwater committee has been discussing monthly. The gwc and Accomack planning office are why things have gone so slowly. The gwc made no formal request to the state nor did they set out a timeline. They did ask Accomack to include the groundwater permit in their CAFO packet which the county refused to do. Accomack definitely is culpable.”

DEQ has created an amnesty program for current operators to apply for a permit. DEQ is planning to wait until they have all the information from the CAFO’s and then run the models with all the data and perform a “cumulative impact analysis”. 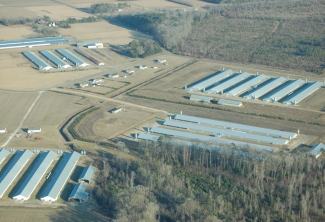 Some citizens have already begun to voice concerns about the amount of groundwater industrial poultry facilities have been using without any way to accurately determine the total amount of groundwater being used. This water is currently being drawn from the sole source Upper Yorktown aquifer.

Section 62.1-258 of the Code of Virginia, which applies to any user proposing to withdraw over 300,000 gallons of groundwater/month (approximately 2 large poultry houses), states: “It is unlawful in a groundwater management area for any person to withdraw, attempt to withdraw, or allow the withdrawal of any groundwater, other than in accordance with a groundwater withdrawal permit…”.

To be authorized by the state to build and operate a CAFO, they have to apply for a CAFO permit from the agency.   The application requires that the applicant provide the state with details such as the number of chickens per flock,  number of flocks per year,  number of houses,  what they will do with the manure, how they will handle mortality.

In an email, Wardtown resident Ken Dufty told the Mirror, “Because the DEQ’s State Water Control Board failed to uphold the law and require the 83 CAFO’s either operating or under construction now to get a GWWP, every drop of water that is withdrawn from our sole source aquifer is illegal. Period. 62.1-258. Injunctive relief could be sought to stop those under construction from starting their pumps. This is a necessity. While the Blackwelder test may protect those already fully operational (because of balance of degree of harm as established in Blackwelder), it most certainly should not protect those getting ready to go against regulations in that regard…the law says that no person “shall attempt” to use groundwater (over the threshold of 300.000 gpm which is 2 houses)…unless they first get a groundwater withdrawal permit. We also know by reading 62.1-270 that the penalty for withdrawing groundwater from a source without getting a permit if the user trips the monthly threshold is $25,000/day for each and every day they withdraw groundwater without obtaining that permit. But we also know by reading 62.1-269 is that the code only envisions an injunction to be filed by the State Water Control Board….the very authority that failed to ask each CAFO to get a groundwater withdrawal permit.”

The poultry industry standard is three gallons of water as a best estimate over 43 days per bird.    A facility with 2.5 houses with 45,000 birds/flock, with the addition of process water (clean out water, site maintenance) would come close to the 300,000 gpm threshold for requiring a groundwater withdrawal permit.