President Trump’s phone call to Tangier’s mayor James “Ooker” Eskridge provided more fodder for the implacable critics on the left, who after the election seem able to only muster platitudes sautéed in the realm of subjective emotional abstractions. But for homegrown Virginians, the phone call created a spark of hope for one of our treasures, the island complex of Tangier. For many, this President who seems steeped in the material world, and understands that, “America has poured trillions and trillions of dollars into rebuilding foreign countries while allowing our own country…and its infrastructure to fall into a state of total disrepair. We have structurally deficient bridges, clogged roads, crumbling dams and locks”, may be just the guy get the job of saving Tangier done.

The history of the Bay is a harsh one–over the past four centuries, 400 or more islands have sunk into the bay. While the President tried to put the best face on this reality, Tangier’s future, like much of the Eastern Shore, including Cape Charles remains bleak.

A report by David Schulte in the Journal Nature, funded by the Corps of Engineers examined the effect of climate change and Sea Level Rise (SLR) on the evolution (1850-2013) of the last inhabited offshore island in Virginia waters of the Chesapeake Bay, the Tangier Islands. Under the mid-range SLR scenario, “much of the remaining landmass is expected to be lost in the next 50 years and the Town will likely need to be abandoned.”

The Tangier Islands are a complex of islands, Goose, Uppards, Port Isobel and Tangier. Results of the Corps’ study notes that Uppards is expected to be inundated at an accelerating rate compared to the semi-protected Tangier. Goose is predicted to be entirely inundated by 2038. 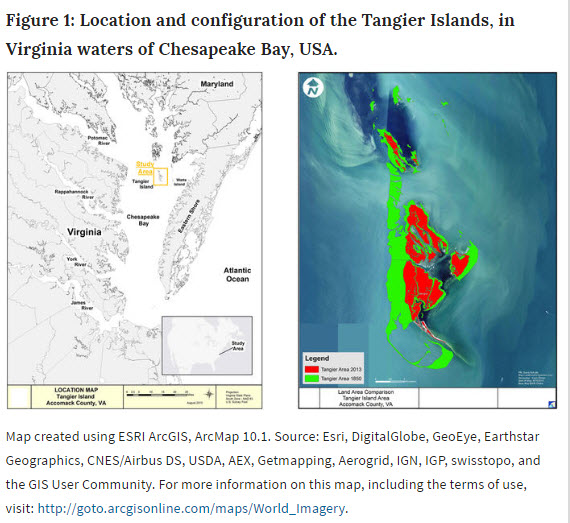 (Image Schulte, D. M. et al. Climate Change and the Evolution and Fate of the Tangier Islands of Chesapeake Bay)

If Uppards is inundated by 2063, as predicted, the Schulte report also predicts that the Town of Tangier will be uninhabitable in less than 100 years (likely by 2063) and “all current uplands, with the possible exception of the three small higher areas will be converted to a mix of intertidal and high estuarine marsh.”

In order counteract this scenario, the report suggests a segmented breakwater system which “would provide physical protection.” These breakwaters would be built offshore to permit construction of a sand beach/dune system along the western shore between the breakwaters and existing shoreline. The dunes would catch wind-borne sediment as well as supply inorganic sediment to the island during storms strong enough to blow some of the dune sand over the island. Along the eastern shore, breakwaters would also be built.

(Image Schulte, D. M. et al. Climate Change and the Evolution and Fate of the Tangier Islands of Chesapeake Bay)

While a project like this does provide some hope, getting funding for something like this is inherently political. To queue up a large-scale project, the Army Corps of Engineers must justify it by what is termed “legitimate national interest”, which can be economic and military interests, but also locations that are crucial to ecosystem restoration or, in Tangier’s case, also historical preservation.

A case for saving the Islands

“It’s the last offshore fishing community in Virginia, literally the last one standing…We lose parts of America when we lose places like this,” said David Schulte (NY Times, “Should the United States Save Tangier Island From Oblivion?”). Tangier was settled by several families from Cornwall and Devon, England, in the 1700s and 1800s. The Tangier accent, which has been studied by linguists and anthropologists, speaks to that heritage. If the island goes, so to would the accent.

Given predominant sea grass beds and wetlands, Tangier also has ecological value. The subaqueous vegetation beds are “where blue crabs reach maturity, and migrating birds rest on the wetlands. The vegetation cleanses the water and air. It  has been calculated that the “ecosystem value” of Tangier to be millions of dollars annually.”

Islands can be repaired and saved

Maryland’s Poplar Island has gone from a tiny sandbar to a stretch of land 1,140 acres. Plans are to increase it to 1,715 acres. In 2003, the Army Corps began building a dike, kind of “hard” boundary made up of sand piles covered with a strong textile material and topped with crushed stone and huge, 2,000-pound boulders. The Corps has been filling the pools inside the perimeter wall with silt dredged from the channels leading into Baltimore Harbor and carted here by scow 24 hours a day during active periods of construction. When completed (estimates are around 2040), Poplar will serve as a wildlife sanctuary.

Climate change and sea level rise, whether human induced or naturally caused, is an environmental reality that all coastal communities will have to accept and deal with. Given the limited amount of resources available, political decisions about which communities to save or let go will have to be made. For the Tangier Islands, the political argument for saving them has to begin now.

While some may find it easy to mock the President’s call to Mayor Eckridge, pragmatists will see this as a major opportunity to finally get the funding to engineer and repair the islands. We have the ear of a POTUS who is by trade a builder that deals with, and is most comfortable in the physical world of construction projects. It is up to our leaders in Richmond to drop the demagoguery of 50 years ago, seize the opportunity and engage with this President.

Tangier is the only off-shore fishing community left in Virginia (correction, David Schulte 6/22/2017), and it is running out of time. If no action is taken, the community of Tangier may become among the first climate change refugees in the continental USA. If that happens, shame on us for blowing this golden opportunity, and not trying at all.

Data, quotations from these reports and articles were used in this story:
Schulte, D. M. et al. Climate Change and the Evolution and Fate of the Tangier Islands of Chesapeake Bay, USA. Sci. Rep. 5, 17890; doi: 10.1038/srep17890 (2015). https://www.nature.com/articles/srep17890
“Should the United States Save Tangier Island From Oblivion?”- Andrew Moore, New York Times