While the deep waters off Cape Charles Harbor create an excellent opportunity for maritime economics, they also provide a prime location for large ship anchorages. Since ships currently use waters off of Cape Charles for temporary anchorages (and have for many years), the US Coast Guard is proposing a formal anchorage that will be located just outside the town harbor. Current use cases predict little or no uptick in traffic, however, this is hard to predict for certain.

USCG representatives were in Cape Charles Wednesday to brief the public on the current proposal. Public comments and questions were robust, mainly focused on the impact to tourism, town commerce, local fishing, and of course the environment. Local fisherman Butch Vest noted that, after many years of being abused by the Omega Menhaden fleet, recreational fisherman are leery of large ships anchoring in midst of local fishing grounds, especially during rockfish season. Vest also voiced concern that commercial activity, such as crabbing could also be effected. While the USCG made efforts to present a big picture scenario, offering the fundamental role that cargo ships play in the regional and national economy, Nancy Vest countered, “I can appreciate that, but what I’m concerned about is our economy and how it will be effected. I’m concerned about the survival of this town.”

It is important to note that this is still in the proposal phase, and the Coast Guard is actively seeking community input on the matter, pros and con. Comments may be submitted in writing at the federal e-rulemaking portal at http://regulations.gov using the code USCG-2015-1118. On line comments must be entered by August 28.

All comments will be reviewed, and according USCG representatives, are a fundamental part of the decision making process. Any concerns by citizens should be posted as soon as possible. According to USGG representatives, alternative locations and designs are also suggested; that is, use the chart below, or another chart of the lower bay, and draw what you feel is a more appropriate location, take a picture with your phone, and attach it to your comment. The Coast Guard is looking for an area with an average depth of 25 to 45 feet. The image below indicates the area that the USCG is proposing for the anchorage.

Once public comment is closed, the USCG will move on to the environmental and economic impact statements before a final decision is made. This can take 3 to 6 months to complete. 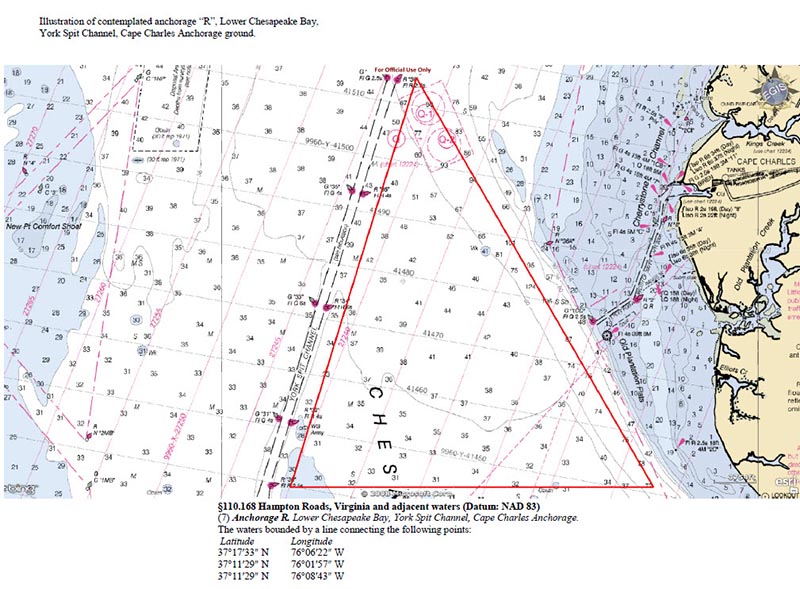 Comments from Industry have already been received, especially by Captain J. William Coffer of the Virginia Pilots Association, “While we strongly agree with the need for a new deep-water anchorage ground for commercial vessels, we do not agree with the USCG’s proposed anchorage boundaries. To become a “new deep-water anchorage,” it must encompass the deeper water to the north of the proposed boundary. Historically, this is where state pilots anchor deep- water vessels. In the current proposal this space is not included. In addition to the boundary extension to the north, we would request consideration to extend the anchorage slightly south to support lighter draft vessel s that would not be required to travel as far north to secure a safe anchorage ground.
Without including this critically important deeper water as part of the proposed anchorage, we would adamantly oppose this proposed anchorage as there is no need to create a limited shallow water anchorage. The importance of the lower Chesapeake Bay commercial anchorage is the inclusion of shallow and deep draft areas, allowing choices for secure anchoring, adequate spacing between ships and safe entry and exit from the anchorage.” 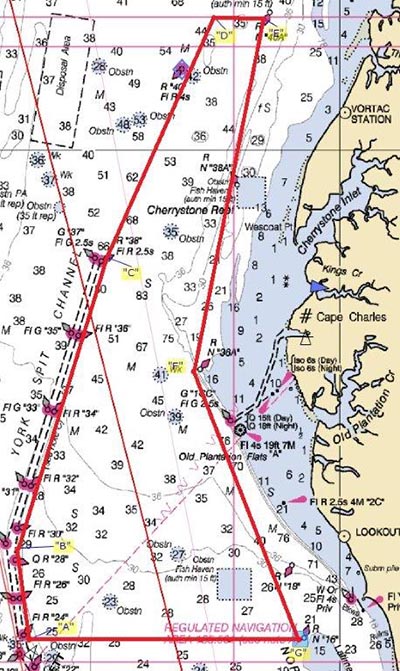