WASHINGTON, D.C. — Immigration has risen to the top of the list when Americans are asked to name the most important problem facing the nation — edging out the government, which has been the top issue each month since January 2017. The 22% of Americans in July who say immigration is the top problem is up from 14% in June and is the highest percentage naming that issue in Gallup’s history of asking the “most important problem” question. The previous high had been 19%.

But oh my gosh, what about Russia?

Once the press conference furore was over, the poop hit the fan as the left-leaning world attempted to out-signal one another’s virtue as to the “treasonous”, “surrender” that had occurred.
The internet, especially Facebook where idiots and morons come post unwitty memes, became ‘full’ of “Trump” and “Treason” chatter – more so even than when he joked in July 2016 about Russia having Hillary’s missing 30,000 emails.

Once again – the “Russia, Russia, Russia” cries drowned out any sane discussion of the end of cold war 2.0 started by Hillary and Obama, Syria, the economy and Israel (Jerusalem).

Despite Democrats’ unending focus on Russia and the media’s constant collusion chatter: few Americans care, because they have jobs to do, work to do, families to care for…and they just might want to have fun. You have wonder what kind of loser dolts are really that obsessed with Donald Trump? Go figure.

As the latest survey from Gallup shows: when asked what the most important problem facing the nation is, Russia did not even warrant a 1% – and worse still, it is declining in importance from there: 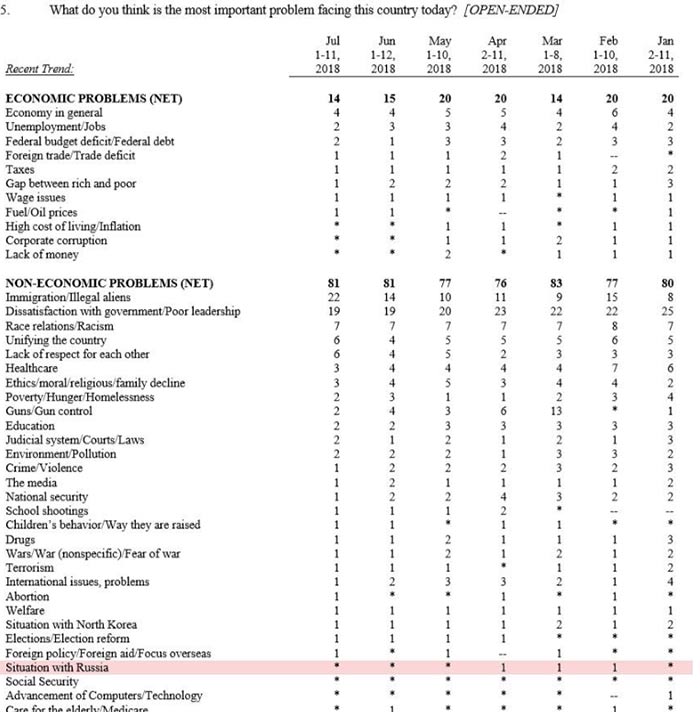 So with all that energy expended on the Russia collusion deal, let alone former FBI Director Comey’s insistence that ‘anyone voting Republican is anti-American’. But, we are reminded of what James Carvell said during the Clinton campaign, it’s all about the economey. Steve Bannon summed it up at CNBC’s “Delivering Alpha” conference: The Democrats abandoned the American worker.