It was confirmed Friday that interim Town Manager Bob Panek has resigned.

According to sources from the Town, while Panek was allowed to resign, he would have been terminated otherwise. Panek attempted to give a 30-day notice, but that was rejected. The town told him his resignation was immediate. 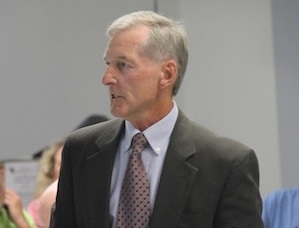 Town sources told the Mirror that, while there were other factors, the resignation was due to a case of basic insubordination.

In May, Panek, who was acting as town manager after the resignation of Brent Manuel, brought a proposal from the Bay Creek fitness club that would have allowed town employees to join the club for a mere $90 per month. Panek apparently negotiated the deal on his own. The town would have to budget and pay the club $5000 for employees to use this benefit.

Panek next had the proposal put on the agenda for the next Town Council Regular Meeting. Panek presented the proposal at the meeting, however, no motion was made to approve it, and it died there.

Town sources told the Mirror that they found the idea ludicrous, given that they were still having trouble balancing the budget.

Town sources told the Mirror that Panek next went back to the fitness club and gave them the $5000 anyway, presumably so he could join himself. The Mayor and other members of council were furious and brought Panek in to explain himself. He resigned soon after. Town sources told the Mirror that in an attempt to keep his job, Panek listed a litany of things ‘he has done for the town’, which sources say elicited a series of laughs.

This is not the first time Panek has found himself embroiled in controversy. A Defense Week article from 2002 found that Panek was actively involved in a scam to bilk the Navy retirement system which allowed for some to retire before their time and start collecting pensions. The story was based on a 2000 Navy Inspector General (IG) report on the “manipulation of the federal retirement system.” The report called the scam a case of senior Navy executives “taking care of their own.”

The Town has told the Mirror that, even as Mr. Panek has tendered his resignation as interim town manager/assistant town manager, he will continue working with the town as a contractor managing capital projects.