By Darryl Fears, with permission from The Washington Post Jul 5, 2017. The Mirror was alerted to this story by Joseph F. Corcoran.

The $19 billion bid to clean the Chesapeake Bay and restore its health rests on a simple plan: cut the amount of nutrient waste – involving nitrogen, phosphorus and sediment – that causes most of the bay’s pollution.

For nearly seven years since the cleanup started, the federal government and six states in the bay’s watershed have reduced municipal sewer overflows that pour nitrogen and phosphorus into rivers that feed into the bay and cut the fertilizers and othernutrients that run off from hundreds of farms. They also counted on the Conowingo Dam to block massive amounts of sediment in the Susquehanna River from smothering bay grasses that nurture marine life.

But that part of the plan has gone very wrong.

According to a report being prepared by scientists who work for the Environmental Protection Agency program that manages the bay cleanup, the reservoir behind the hydroelectric dam, which sits at the top of the Chesapeake Bay in Maryland, near the Pennsylvania border, has filled with sediment far sooner than the agency had predicted. 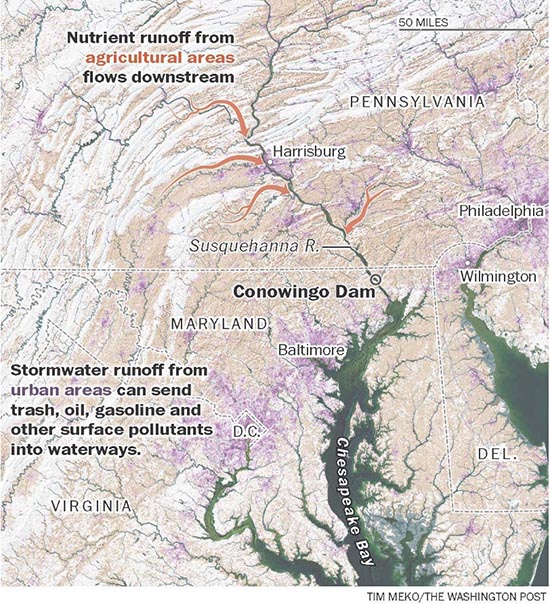 Using technology that didn’t exist when the original calculation was made, the scientists said they have determined that the original estimate of when the reservoir would fill was off by more than 15 years. Rather than reaching capacity in 2030 to 2035, it is already 95 percent full and could cease protecting the bay from sediment within the next three years. As Johns Hopkins University professor William Ball said, “It’s like the dam is not even there.”

Scientists Robert Hirsch, Qian Zhang and Ball spelled out the danger in no uncertain terms in a study last year. The U.S. Geological Survey, they wrote, has estimated that when the Conowingo reservoir reaches capacity, sediment and phosphorus “would increase by about 250 percent and 70 percent respectively.”

Sediment and other nutrients have flowed naturally down the Susquehanna and other rivers since time began, Ball said, “but human development altered the landscape and caused more.” Too much sediment buries grasses that protect juvenile fish, crabs and other marine animals on the bay floor, and is key to the estuary’s health.

U.S. Geological Survey hydrologist Gary Shenk and his team of scientists at the EPA’s Chesapeake Bay Program in Annapolis are preparing a 500-page analysis of sediment storage at the dam for public release later this year when the cleanup reaches its midpoint. Shenk and Zhang recently shared its findings with The Washington Post.

The revelation comes at a challenging time. President Donald Trump’s proposal to cut 31 percent of the EPA’s budget would eliminate the Chesapeake Bay cleanup program and the 90 employees who coordinate it, including Shenk’s team.

Although EPA Administrator Scott Pruitt recently praised the bay cleanup as an example of how a federal and state collaboration should work, he stood behind the president’s budget request.

Supporters of the bay cleanup could take heart in Pruitt’s recent bipartisan grilling by senators who deplored the cuts and said they would not stand for them. The bay cleanup has strong support among congressional leaders in the bay region.

However, there’s little indication that political support for the project reaches wider.

Pruitt has opposed the project in the past. As Oklahoma’s attorney general, he was one of more than a dozen conservative state attorneys who wrote a brief supporting a lawsuit to stop the cleanup. The suit failed last year.

The revelation that the dam is filling up quickly could cause headaches in the Chesapeake Bay region.

Six states – Virginia, Maryland, West Virginia, Delaware, Pennsylvania and New York, as well as the District of Columbia – share the burden of the multibillion dollar cleanup, which calls on them to upgrade sewer facilities that pollute the bay with overflows of human waste and regulate runoff of animal waste and chemicals at farms.

Previous reports by the USGS and the U.S. Army Corps of Engineers have shown that sediment was gathering at the dam at a faster rate than projected, but the conclusion that the dam’s sediment reservoir is already essentially full is new.

Now that they can no longer count on the dam to block sediment in the Susquehanna River, officials probably will be forced to shift that burden to states. But the states say that they are already overwhelmed by the cleanup costs.

The miscalculation that the dam could continue to collect sediment for another quarter century will be of particular interest to Maryland Gov. Larry Hogan (R). During his 2014 campaign, Hogan made sediment overflows at the Conowingo a large part of his environmental platform. He expressed suspicion that the problem at the dam was far worse than the EPA under the Obama administration let on.

Hogan and his supporters, many of whom are politicians in farming counties, said that sediment was a bigger threat to the bay’s health than phosphorus and nitrogen pollution that farms and cities were being forced to limit at a significant financial cost.