It’s déjà vu all over again. The 642 Reconstruction Project, a $10.5 million dollar project funded by Virginia Department of Highways once again brings into focus the 1991 Annexation Agreement between the Town of Cape Charles and Houston developer Brown & Root, which laid the groundwork for Accawmacke Plantation, and then, when purchased by Richard Foster became Bay Creek. Brown & Root and the Town worked stealthily to craft the agreement, mainly to bypass the many concerns and objections of Northampton County—to close the deal, the developer made many promises, including financial support for a new wastewater treatment facility, but also for the expansion of Route 642.

On page 65 of the Annexation Terms and Conditions, it clearly states that “the developer be required to assume full construction cost of all off-site road improvements required to serve the proposed development.” Just as the developer never paid a penny towards the new wastewater plant, they have also somehow managed to wriggle free of any obligations for expanding Route 642. Granted the agreement was signed back in the 1990s, yet, as far as we can tell, it is still binding. It is clearly stated in the agreement that it is bound to ‘run with the land’. That is, the Annexation Agreement is quite sticky, following Mr. Foster, and now Sinclair Communications. 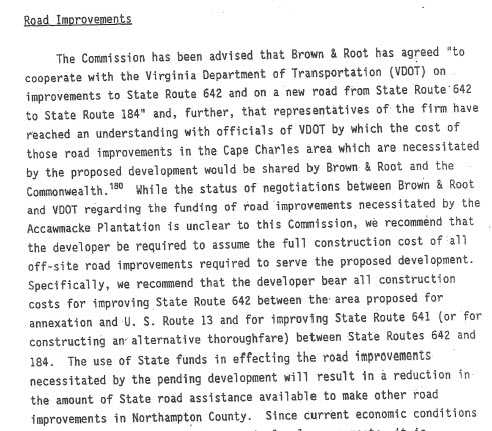 The Cape Charles Mirror contacted VDOT, asking whether they reviewed, or were aware of the Annexation Agreement. They responded, “Thank you for contacting the Virginia Department of Transportation (VDOT). As Northampton County handled these acquisitions, it would be best for you to contact Katie Nunez, Northampton County Administrator for more information.” Northampton County has been handling lead aspects of this project, so a legitimate question is, before burdening the taxpayers with the full $10.5 million, whether the county referenced the Brown & Root agreement before moving forward. If the developer agreed to fund the expansion through the 1991 annexation, why would you let that go? Just as the Town and County must be aware of the stated agreements, the State, VDOT, one would think, should have been similarly aware. While the Town of Cape Charles did make a marginal effort to get Foster and Bay Creek to pony up for construction of the wastewater plant (the Town eventually backed down), there has been no attempt by the Town, County or VDOT to persuade the developer in this case to honor its obligations under the Annexation Agreement for some, if not all of the 642 reconstruction. The Mirror has attempted to contact Ms. Nunez, but as of this printing, has not received a response. The county attorney, Bruce Jones did provide some historical background, and noted that he could see no reason why the agreement would not still be in effect in most, if not all, respects. Mr. Jones could not confirm which entity has what obligations for the 642 project. 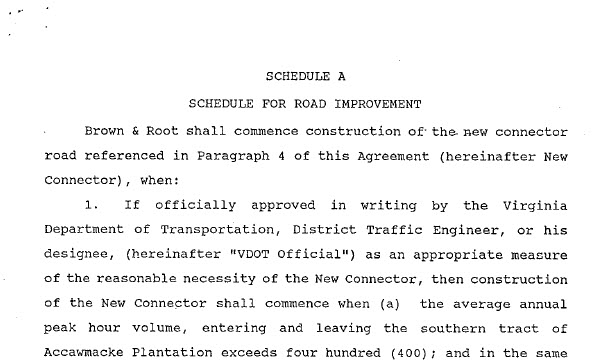 One can already hear the apologies for the developer–that the the ‘expansion’ is due to Bayshore’s need to move larger product (thus tapping into the un-metered water source at much higher rate), and the project will also create an alternative route into the harbor. However, VDOT is also touting the project as being for ‘safety’ reasons. The need for increased safety is due to increased traffic, which is the result of the build out of Bay Creek; it would seem that would  be enough to trigger the agreement. Agreements are agreements, and it is the duty of the legislative body to protect the taxpayers by ensuring that all entities honor their obligations. That is, unless we have to chalk this up as another case of collective memory loss.