At Town Council’s June 21, 2018 regular monthly meeting, several speakers addressed the issue of potential drilling operations off the coast of Virginia.  According to the information provided by these speakers, including Tera Pascarosa of Oceana, there are numerous risks, which outweigh any real or potential rewards. The consensus of the speakers was for the Town Council to adopt a resolution opposing offshore drilling operations, and any corresponding seismic explorations for oil and natural gas deposits.

Since the request for this Council resolution was not on the agenda as an action item, that meeting was the last of the then-sitting Mayor and Council, and due to the fact that a voting majority of those expected to vote on such a resolution were not yet seated or absent and so not able to ask questions, staff brought the matter back as a formal presentation to Council at the July 12, 2018 regular meeting. A number of resolutions adopted by other localities were also reviewed and Council was in agreement to adopt a similar resolution in opposition to offshore drilling and exploration, including seismic testing:

RESOLUTION 20180816
OPPOSING OFFSHORE OIL AND GAS DRILLING AND EXPLORATION,
INCLUDING SEISMIC TESTING
WHEREAS, on January 4, 2018 the Secretary of the Interior announced a draft proposal to lease
areas off the Atlantic coast, from the Delaware Bay to Cape Canaveral, for seismic testing, oil and gas
exploratory testing and drilling; and
WHEREAS, in 2010 a similar proposal was scheduled to proceed but was cancelled after the
Deepwater Horizon oil spill in the Gulf of Mexico starkly demonstrated the serious risks of offshore
drilling; and
WHEREAS, Governor Ralph S. Northam has announced Virginia’s opposition to the offshore
drilling proposal, and has requested that areas off the cost of Virginia be exempted; and
WHEREAS, federal, state and local governments and other community groups have spent billions
of dollars in funding and other resources in an effort to improve and maintain the condition of regional
waterways, including the Chesapeake Bay; and
WHEREAS, the tourism and commercial fishing and aquaculture industries are vital to the
economies of the Town of Cape Charles, Northampton County and the Hampton Roads Region, and could
be devastated by an offshore energy exploration catastrophe; and
WHEREAS, a healthy tourism industry and economy are necessary to protect the public health,
safety and welfare of our citizens; and
WHEREAS, the speculative benefit of oil and gas drilling is not worth the risk of a Deepwater
Horizon-type incident that could cripple the regional environment and economy for decades;
NOW, THEREFORE, BE IT RESOLVED by the Council of the Town of Cape Charles, Virginia
1. That the Council opposes offshore oil and gas exploration and drilling, including seismic
testing.
2. That this resolution shall be in effect from and after its adoption.
***************************
Adopted by the Town Council of Cape Charles on August 16, 2018. 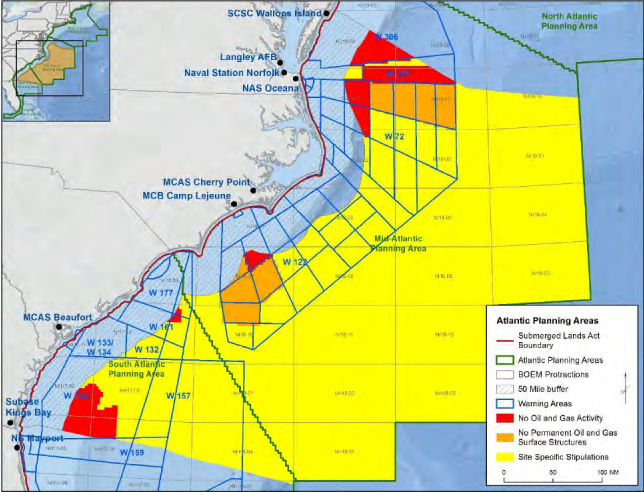 A map prepared by the Department of Defense shows that offshore drilling would likely have an impact on military operations in the mid-Atlantic region. (Courtesy of John Uhrin)