Special to the Cape Charles Mirror by Chas Cornweller.

The other night I watched the Town Hall Debate on CNN (which actually was less a debate, than a fifty-minute infomercial on Solar Panels and Wind Turbines, as sponsored by Al Gore). The issue of Global Warming, Climate Change, Sea Level Rise, Rain Bombs (my favorite term) and Changing Weather Patterns, to name a few terms used by science, is an elaborate and complex one. It has also been debated now for over sixty years. I have actually seen and read an article from Life Magazine dated August 27, 1956 entitled “Our New Weather” subtitled, “Scientist believe more hurricanes, more tornadoes, higher temperatures and unseasonal storms are part of a long-term change in world climate.” Google it…an enlightening read. 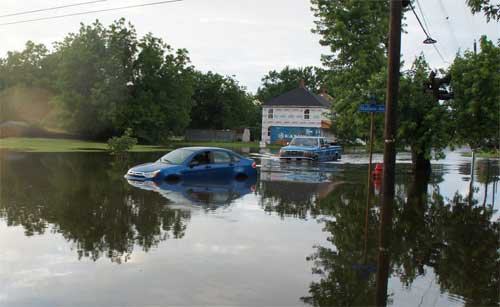 So, yes, the debate continues. And has continued for some time now. The interesting thing is, we are now in the throes of this massive change that is effecting everything from food and insurance prices to shifting national borders. Mass migrations have occurred around the world (Bangladesh 1970-72 due to flood conditions, Middle East region – Syria, Iran, Iraq, Yemen 1970- present due to drought conditions) There are other hot spots around the world that are either experiencing drastic climate change, but get less coverage either due to apathy or lack of significant impact to the rest of the world’s economy. The point being, the earth is a very complicated and well linked machinelike organism. Many, many people cannot or will not see the earth in this way. It is a deliberate and living organism that operates in ways we have not begun to fathom. We, as a species have had a major impact in destroying vast amounts of forest (Amazonian Rainforest for one) and filling wetlands and rehydrating desert regions. Now, the major cause of the debate that rages today is this…is mankind to blame for climate change?

My take on this question is, no, not directly. Weather/Climate change is inevitable, clear and simple. Geological history has proven that as a fact. Just twenty thousand years ago, the entire Northern portion of the Northern Hemisphere was under an ice sheet. This sheet covered Canada and as far south as northern portions of Pennsylvania, Illinois, Washington State and most of northern Europe and Siberia as far south as France in the west, China in the east. Vast areas that are now under three hundred feet of water were exposed and habitable. This is a scientific fact and indisputable. Was mankind responsible for the great thaw of 10,000 B.C.? Highly unlikely. So, the take away is this. Earth’s weather changes. And it sometimes changes in big ways. So we, as fellow travelers, have that going for us.

But also, since ten thousand years ago, the human population has increased seven billion and counting. That increase finds many, many thousands of millions of humans living on or near a sea coast. The question of sea level rise is really a no brainer. Especially since the nearly completed melting of the last glacial cap the oceans have risen over one hundred feet (some estimates place it even higher!) Twenty thousand years ago, the coastline off the Eastern Shore would have extended miles out into the continental shelf. There was no Chesapeake Bay. Possibly it was just a rivulet, an extension of the Susquehanna or the James, Rappahannock, York, and Potomac. Today, it is a full bay, the largest estuary in the United States and growing. Sea level rise is real. Geological history tells us this. So, in fact, thousands of millions, perhaps several billion, will be directly affected.

With no dis-respect to Mayor Eskridge and his observations of the bay, he is sadly mistaken. With every major storm that blows over the bay, that rise is measurably indicated. Watermen and weathermen call this tides, not sea level rise. Mayor Eskridge also notes that it is erosion that is eating at the island. In that he is correct, but without sea level rise and an influx of increased tidal fluctuation, erosion would not have the effect it is having now. In fact, if the levels were going down, the island would be increasing in size. But, in fact, the island community is doomed. With or without a seawall of less than three feet in height, the timetable for the existence of that island is at best one hundred years. At worst, thirty to fifty years. Another aspect that Mayor Eskridge (and many others) fail to grasp, is the lowering of the crust/mantle directly under the entire eastern seaboard. The east coast is sinking as well as the sea is rising. The drowning of coastal cities such as Miami, Charleston, Savanna, Wilmington (N.C.), Norfolk, New York and many other smaller coastal villages and towns is inevitable. Is mankind responsible for this? Maybe, maybe not. Does it matter, at this point?

The key here is, enlightenment. Opening your mind to the problem and contemplating how to solve it. One solution is, move. Move, far inland and preferably to higher ground. Another, costlier solution is, build a wall and protect the areas. The Dutch have been doing it for years. The city of London is protected from the rise of the Thames River by a series of locks and barriers that open and close on command. A series of dams and dykes have protected (mostly successfully) the City of New Orleans for over a hundred years. It took a modern weather event to expose the flaws in a poorly designed and built system there. The same will occur again in the near future, possibly somewhere along the East Coast. It is as inevitable as the rain falling from the sky.
Lastly, I somewhat joked about the infomercial of the wind turbines and solar panels at the beginning of this discourse. However, energy use is no joke. Fossil fuels have done irreparable damage to our atmosphere. Mankind’s fault? You bet it is. Can we reverse it now? The answer to that is a resounding no. The damage has been done. All it would take to tip this earth into another extinction event is a cataclysmic eruption of any major volcano or caldera anywhere in the world and a release of millions of tons of inner earth gases such as sulfur dioxide, hydrogen sulfide, carbon dioxide and vast amounts of water vapor into the upper atmosphere. Again, mankind’s fault? No, and mankind would be hard pressed to compete with the amount of gasses released by an eruption of this size. The pattern I am presenting here is two-fold. One, whatever we do from here on out, is incrementally small compared to what Mother Earth can and will hand out. Two, the human species is one of the weakest links in the sustainability of the balance of life on this planet. We are more comparable to a microbe (and a very slow adapting/evolving microbe at that!) on this planet. And as far as microbes go, more a harmful one to the earth. We are like a cancer than a healer. More like a borer beetle in a pine tree than nourishing rain or supportive soil. The human species in its present modern form has been around somewhat give or take a couple of hundred thousand years. The lasting effect we have had on the weather (for better or for worst-does it matter?) has occurred in just under the past two hundred years. We are quickly using up the last of earth’s resources to accommodate our modern existence and crass materialistic values. And while we are busy at this, many voices argue whether fossil fuels are needed or should we convert to another more sustainable source of energy. My question at this point is… does debating about it really matter? Our procrastination has cost us decades of advancement and protection from a looming problem. The alarm was sounded back in the fifties. We didn’t listen.

So, expect more intense hurricanes in the east, tornadoes everywhere, massive wild fires in the western states, higher taxes for everyone, and outrageous insurance rates in the future. Will wind and solar energy sources replace fossil fuels? Absolutely. But, not anytime soon. At least not until the three largest energy companies can come up with a way to reach deep into your pockets and make a profit of renewable energy. Until then, hunker down, buy flood insurance, hip-waders and kayaks and be mindful to keep your fossil fuel burning vehicle parked on higher ground. Because if you wait for politicians to act, you’ll see your village go the way Mayor Eskridge’s will eventually go. And it will take a lot less than a couple of hundred years.