On the Eastern Shore, as we continue to grapple with economic development issues, one shining light has been the success of our aquaculture industry. For those that grow oysters, they have one perceived nemesis, the cownose ray, or the Chesapeake Bay Stingray. Cownose rays, left to their devices can ravage oysters planted in underwater farms. Due to the ray’s avarice for oysters, some aquaculture advocates have started a campaign to reduce ray populations by leveraging commercial fishing: “Eat a Ray, Save the Bay.” The push to control rays has resurrected another Chesapeake Bay pastime, bow fishing. People use a bow and arrow to shoot rays from a boat.

The explorer Captain John Smith encountered huge schools of cownose rays. In fact, a ray famously delivered a venomous sting to Smith (which was so painful his crew feared he would die) at a place in Virginia now called “Stingray Point.” Although the rays obtained this ravenous oyster-eating reputation, a NOAA report states that, “oysters… were not found to make up a significant portion of the diet of cownose rays,” A more common food source is razor clams, macoma, and softshell clams. In the Chesapeake Bay, where wild oysters and clams are disappearing, cownose rays are being scapegoated for reductions that may have more to do with human activity. In the Bay, as the “Eat a Ray, Save the Bay” campaign encourages, rays are being killed for money. Not only is this inhumane, it is ecologically reckless. The NOAA Chesapeake Bay Office (NCBO) states on its website: “NCBO does not currently support developing a fishery or using other methods to reduce the number of cownose rays in the Bay.”

Rays don’t reach sexual maturity until age 8 and take about 11 months to produce a single pup.  It would be disastrous if the cownose ray was no longer a part of our ecosystem. Fisheries Specialists at the Virginia Institute of Marine Science are concerned that killing rays to save oysters could could have unintended consequences. They note that rays are a species native to the Chesapeake Bay—and not an invasive species.  VIMs worries that if the commercial fishing industry targets rays, since they reproduce slowly, they could be severely damaged. When California’s oyster growers launched a program to get rid of bat rays, the effect was that more oysters died than before. The rays were actually eating oyster predators, such as crabs, which became more numerous, and all but destroyed the beds.

Currently, VIMs is working with the aquaculture industry to find non-lethal means to control ray-shellfish interactions. Planting oysters under layers of older shells is one method, and using something called a bubble curtain, which are “produced by tubes that pump out streams of air in protective rings around oyster beds. Oddly enough, bubbles seem to confound rays.”   Magnetic fields around oyster beds are another method being experimented with. Magnets disrupt the rays sensory system (called the Ampullae of Lorenzini), which is a series of pores around the mouth that detect electrical impulses given off by their prey.

The bottom line is rays eat oysters, so this research is critical to our aquaculture industry, as well as to a healthy ray population.       “This issue is not new,” said Dean Grubbs, a researcher at Florida State University. “About every 10 years for the last 40 years, there has been an outcry from the oyster industry that ray populations have increased and are destroying oyster beds. But there have always been a lot of cownose rays in the Chesapeake Bay.”

As always, an ecosystem based approach is what is needed. Providing a sustainable balance between predators and prey in the Chesapeake Bay, whether we are talking about rockfish and menhaden, or rays and softshell clams (their primary food source), is needed. An effort to restore soft clams can go a long way to giving the rays something to eat besides farmed oysters. On the flip side, better shark management (rays are natural prey for sharks) can sustainably manage the ray population without bow hunters. 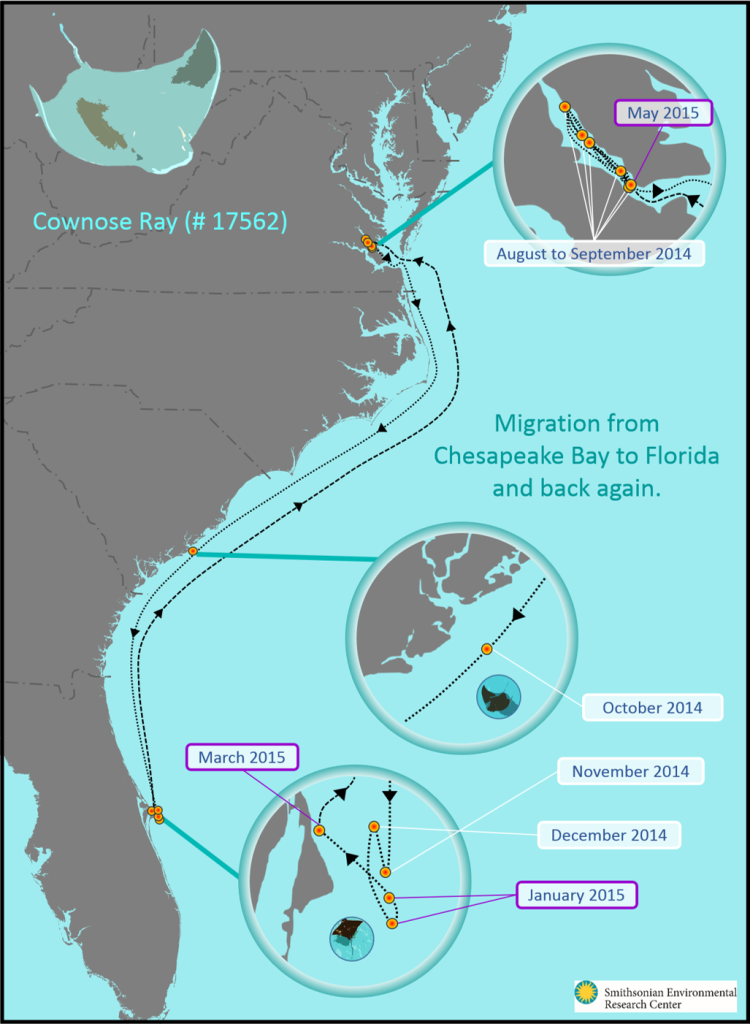