VIMS, Penn State University – Coastal waters play an important role in the carbon cycle by transferring carbon to the open ocean or burying it in wetland soils and ocean sediments, a new study shows.

The study team, which includes Virginia Institute of Marine Science researchers Elizabeth Canuel, Marjy Friedrichs, and Pierre St. Laurent, constructed the first known carbon budget for the East Coast. They tracked the flows of organic and inorganic carbon into and out of coastal waters from the southern tip of Nova Scotia, Canada, to the southern tip of Florida.

Cycling of carbon in the open ocean and on land has been the focus of much research, but lead author Raymond Najjar says intervening coastal waters have “fallen through the cracks.” Najjar is a professor of oceanography in Penn State’s College of Earth and Mineral Sciences.

“Coastal waters have a whole set of issues that are difficult to grapple with, such as the tides affecting certain areas twice a day, and this has made it difficult to incorporate this area into quantitative models,” Najjar says. “We recognized there was a gap there and thought we should develop a carbon budget so we could see what we know and don’t know.”

Planning for the research project began during a workshop at VIMS in 2012. Since then, the study’s 30 authors have gathered data from dozens of published studies to quantify how much carbon enters, exits, and is transformed within the study area’s coastal waters. They report in Global Biogeochemical Cycles that about 20 percent of the carbon entering coastal waters from rivers and the atmosphere is buried, while 80 percent flows out to the open ocean.

“Efforts like this help fill gaps in knowledge and inspire further research to help refine carbon budgets for the region,” Canuel says.

Indeed, Friedrichs and St. Laurent have already began follow-on work to resolve one of the biggest uncertainties in the recent study— the magnitude of carbon flow between large estuaries like Chesapeake Bay and the waters of the continental shelf, and how this may have changed over the past century.

Canuel and her students likewise continue efforts to develop high-resolution measurements of carbon transferred across the marsh-estuary interface.

“Despite advances in many aspects of the carbon cycle,” she says, “how tidal wetlands and estuaries modify exchanges among land, ocean, and atmosphere remains one of the biggest unknowns.”

The researchers also recognize that their recent budget exercise is not static.

“We know that many of the processes we’ve quantified are already undergoing change,” Friedrichs says. “With growing atmospheric CO2 concentrations, increasing global temperatures, and rising seas, what will this budget look like in 2100? Or even in 2050?”

Models are the primary way scientists predict future carbon dioxide levels in the atmosphere, which in turn tell us how much the global surface temperature will rise from the greenhouse effect. But for greatest accuracy, these models must also incorporate the flow of CO2 and other forms of carbon through soils, plants, animals, and other components of the global carbon cycle — including coastal waters.

The researchers attribute this to the relatively shallow water in tidal wetlands and estuaries, as well as the fact that rivers bring an abundance of nitrogen and other nutrients to these ecosystems.

“The way carbon gets buried usually starts with photosynthesis, through which carbon dioxide is converted to organic material in the form of plankton, marsh grass, mangroves, or sea grass,” Najjar says. “When those organisms die, their organic carbon begins to settle toward the bottom. But continental shelf waters are deeper than tidal wetlands and estuaries, so there is more time for bacteria and other animals to consume this dead matter before it can get buried.”

Carbon burial is an important metric when it comes to predicting future atmospheric CO2 levels because, once carbon is in the sediments, it has the potential to remain there and not contribute to the greenhouse effect.

“As sea level continues to rise and disturb the coasts, some of the buried carbon could be respired and released to the atmosphere in the form of carbon dioxide,” Najjar says.

The team used a mass-balance approach for their calculations, which assumes the total amount of carbon that enters a system equals the amount that leaves. 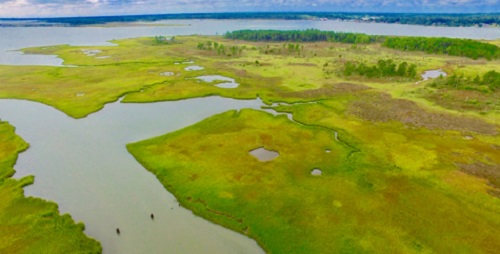 Coastal Carbon Budget: A drone image of the Goodwin Islands near the confluence of the York River and Chesapeake Bay shows the tidal wetlands and estuary ecosystems that play a key role in the coastal carbon budget. (Photo courtesy of D. Walters/VIMS.)

Carbon cycling within coastal waters is complex and the team sought to identify how carbon flows into and out of tidal wetlands, estuaries, and shelf waters. They compiled data from many studies and for the first time synthesized observations and numerical model output to develop a cohesive view of the carbon cycle in a large coastal region.

The scientists also identified carbon fluxes where further research would be needed to reduce uncertainties.

“A decade from now, with new data and even-better models, we may be able to more accurately estimate how various carbon-cycle processes have changed in the past and are likely to change in the future,” Friedrichs says.

The research was funded by NASA and the National Science Foundation.