United Poultry Concerns Urges Positive Action for Chickens in May

“We urge everyone to do a compassionate ACTION for chickens, on or around May 4th,” says Karen Davis, president of United Poultry Concerns which promotes the compassionate and respectful treatment of chickens and other domestic fowl. 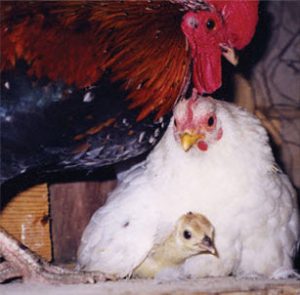 “A library display, a vegan open house, an informative blog post, or simply talking to family and friends about the plight – and delight – of chickens are great ways to stick up for chickens,” Davis says.

Chicago activists will celebrate International Respect for Chickens Day with a Rally to End Slaughter at a Chicago live poultry market in a “hipster” neighborhood, and in Minneapolis a special event will Celebrate International Respect for Chickens Day at Chicken Run Rescue with award-winning independent documentary filmmaker Sam Sprynczynatyk and Producer Medora Frei, who will show clips and give a brief presentation about their upcoming film, Kindred Creatures, featuring several Minnesota/Wisconsin sanctuaries including Chicken Run Rescue.

“Happy chickens are cheerful birds,” says Karen Davis, who maintains a sanctuary for chickens in Virginia. “Chickens love the earth and sun, yet millions are sitting in filthy dark buildings on crippled legs breathing polluted air, as documented in my book Prisoned Chickens, Poisoned Eggs. My article ‘The Social Life of Chickens’shows who chickens truly are – vibrant, personable, earth-loving, friendly birds.”