You are here: Home / Archives for Bottom

Striped bass season started up in the Chesapeake Bay on October 4th. Have no reports, but he CBBT should start seeing some smaller, school stripers after dark.

NOTE THE REGS: Anglers can keep two fish per person ranging from 20 to 28-inches, and one of the two fish may exceed 28-inches. This will stand until the regulations change again in December.

Spot action up slightly this week, with still some  rough surf, it has been mainly at the piers across the bridge.

Sheepshead are still reported along CCBT, as well as some triggerfish  in these same areas. Tautog appears to be gearing up for the fall.

Speckled trout is still slow, but are still reported at the lower Bay.

Flounders are  being reported  off Kiptopeke. The wrecks are also report nice flatties.

The Cape Charles Town Council met Thursday to discuss the future of the town harbor. Although the discussion was intended find a way forward, there was a subtle undercurrent–it appeared the Town was attempting to rewrite history by vilifying former harbormaster Smitty Dize, blaming him for the current financial distress the harbor  finds itself in. The situation at the harbor is somewhat daunting, as it has suffered serious losses during the last four years (-$16,496, -$17,637, -$183,109, and –$198,884). As a way forward, current town manager Brent Manuel stated, “The purpose of this work session, is since we are in transition with the harbormaster position, we are looking at the job description for how we may want this to look in the future. We have three options, continue as a town to own and operate the harbor, a 2nd option is to continue to own the harbor but look at an outside vendor to operate it, and third to sell the harbor.”
END_OF_DOCUMENT_TOKEN_TO_BE_REPLACED 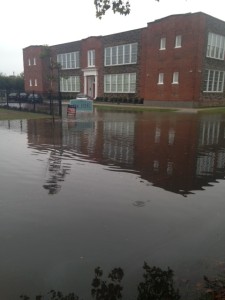 Old School developer, J. David McCormack, who has enjoyed a cozy relationship with the Town of Cape Charles, has once again found himself in court due to his dealings with another renovation project. McCormack, Waukeshaw Development, Haas Construction and the City of Martinsville are being sued by paint and drywall contractor Rojas-Stevens for lack of payment of invoices for work on the historic Henry Hotel in Martinsville, Virginia. According the owner, Ms. Daisy Rojas, McCormack failed to make payment based on work that had not been completed by other contractors (similar to a mechanics lien). Rojas also claims that this is a pattern with this group of developers, and that they routinely choose subcontractors that are smaller, minority owned, and less able to, or even unwilling to fight back.

The Mirror attempted to contact Mr. McCormack through his Waukeshaw Development channels to get his perspective on the case, but did not receive a response.
END_OF_DOCUMENT_TOKEN_TO_BE_REPLACED

At Monday’s Northampton Board of Supervisor’s work session, Bill Satterfield of the Delmarva Poultry Association was on hand to answer any questions the board may have had relative to how the industry operates on the Eastern Shore. Melissa Kellam presented a rundown of the current ordinance, which importantly noted that ammonia scrubbers are currently required to capture odors. Consensus language in the proposed zoning maintaing or enhancing setbacks as well as ammonia scrubbers, would make it improbable that intensive poultry farming could be viable in the county.
END_OF_DOCUMENT_TOKEN_TO_BE_REPLACED

[Cape Charles, September 16, 2015] – Smart Beginnings Eastern Shore has received a $7,100 grant from the PNC Foundation to promote early literacy and school readiness from two to five year old children on the Eastern Shore. PNC provided the funding in support of Grow Up Great, its bilingual program in early childhood education.

The Smart Beginnings Eastern Shore Everyday Fun with Reading workshops are an early childhood/family literacy program that helps parents learn ways to provide an enriched language environment at home through reading to their young children.
END_OF_DOCUMENT_TOKEN_TO_BE_REPLACED

Willie began his career in the financial services industry on Virginia’s Eastern Shore in 1997. His goal is to help individuals and businesses achieve their financial objectives using appropriate investment strategies.

Prior to establishing an Edward Jones office, he served over 20 years in the United States Army and retired as a Major in 1996. Willie served in the Gulf War and was awarded the Bronze Star Medal for service in a combat zone. He is married to Dr. Shirley Mason Randall, an Anesthesiologist, and they have a son, William Xavier Randall, who is also a financial advisor.
END_OF_DOCUMENT_TOKEN_TO_BE_REPLACED

I thank the Cape Charles Mirror for this opportunity to present my platform as I seek a seat on Northampton’s Board of Supervisors representing District 5. I am a native Eastern Shoreman and bring over 25 years of managerial experience to the Board having enjoyed success in both the private and public sectors. My most recent success has been serving as the Town Manager of Exmore where working with the Mayor, Town Council and citizens we have delivered balanced budgets with sound fiscal footing, improved employee morale, and delivered a new sense of optimism for the town. I hope to bring this success to our beloved county.

END_OF_DOCUMENT_TOKEN_TO_BE_REPLACED

Now that we have everyone back at school with all the items they need in their possession, with a great attitude and liking their teachers, paying attention and being in class every day it’s time to take a look at math.

Before we start just a word from Dr. Carson, a man who grew up in the ghetto of Detroit with a single mom and who made something of himself. He said education is your “ticket” to finding a good job and being successful. Another recent item in the news is the visit of the Pope and his going to a Catholic school in New York where most students are Hispanic and in poverty but 98% go on to college. Why is that school so successful when most in that neighborhood have high failure rates?

Discipline, the attitude of the students, and the absolute cooperation of the parents.

Math came about because people began to own things and needed a way to keep tabs on their things. This goes way back to no longer eating wild plants and what animals you get find. A simple stroke in the dirt would be a “1”. 2 strokes, then 3, 4 and maybe for “5” a slash through the 4 marks. People didn’t own much so they didn’t need to make many strokes. As they accumulated more wealth the system needed to grow and different civilizations had different “numeral” systems. “Numbers” are the idea of a quantity and “numerals” is how they are written down. The Romans had letters with V being 5 and probably was a hand with the thumb and forefinger forming a V. Ten is an X which is two V’s. 4 was written with 4 I’s and later written as IV. Likewise 6 became VI and 9 became! X. They have an L for 50 and can add   or subtract an X so 40 is XL, then a C for 100, a D for 500 and an M for 1000. The Emperor, one of the Ceaser boys, felt that his tax collectors were cheating him, what else is new, and ordered a census of the entire Roman Empire. The count came back at more than one million so what to do? Write a thousand M’s?

They decided that a line on top of a numeral multiplied it by one thousand so an M with a line on top was a million. This was OK for counting and keeping track of things but horrible for arithmetic because they had no “lace value”.

Our system, the Hindu-Arabic Numeral system comes to the rescue! The Hindu’s invented the numerals 1 through 9 and the Arabs invented the Zero. Now we had “place value” with zero being a place holder if there were none of the values like 104; no tens’s. Zero is famed as one of the most important inventions of all time and across from the White House there is a Zero Monument.

Early on most people could not read and didn’t even know their numerals. The angles in a numeral could be counted and that was the value so it was written like a 7 and had one angle, a 2 had 2 angles, etc. up to 9 with 9 angles. Zero is a round numeral and has no angles and that’s its value.

In Colonial times very few people could read and if you received a letter or instructions you had to go to a “reader” to find out what it said. These people were so important that the government passed a Forgiveness Act where

a reader would be excused, not prosecuted, for committing one murder. Once we decided how to count, base 10 for ten fingers or some other base the arithmetic was locked in. So 5 + 4 is 9 and 6 X 3 is 18 and that’s how it is and no one can pass a law to change any of these “facts”. Base 12 is faster because you do more work in your head and must have been very popular at one time. Just go to the bakery or look at you watch or calendar to see TWELVE.

There are some things in math that are incorrectly verbalized and this leads to a lot of confusion over very   simple truths. No one should ever say 3 into 6. We read left to right. The problem is 6 (division sign) 3 and is PROPERLY

It is correct to say it was SIMPLIFIED. When working with fractions it is always best to simplify if possible because the numbers are smaller and easier to work with. This is your lesson for today. Hope you enjoyed,

END_OF_DOCUMENT_TOKEN_TO_BE_REPLACED

UPDATE: On October 4, 2015, an arrest was made in reference to the incident that occurred Friday, October 2, 2015 in the Town of Cape Charles, specifically in Central Park. A full press release will be issued.

Cape Charles Police report that a sexual assault and robbery occurred in Central Park around 5:00 pm on Friday.  The assailant was armed, and forced a woman riding a bicycle into a ‘secured’ area. We have been unable to determine where the ‘secured’ area is, but is presumed to be either the new restrooms, or possibly behind the dumpster. The fact that this assault occurred in the vicinity of the newly opened apartments in the old high school, and could have involved the public restrooms, the Police should request surveillance tapes from Cape Charles Lofts (old school apartments); if the suspect fled or entered the park from the northeast, it should be on the camera footage.

Police alert with description of assailent and event below:

On Friday, October 2, 2015, at approximately 1722 hours, the Northampton County Sheriff Office Dispatch Center received a call of an assault that just occurred in the area of Central Park in the town of Cape Charles. Town of Cape Charles Police Officers responded and made contact with the female victim.
END_OF_DOCUMENT_TOKEN_TO_BE_REPLACED

Northampton County announced this week that it has hired Kris Tucker as director of economic and community development. He will be filling the controversial role previously held by Charles McSwain. There had been some push from the community, mainly from citizen activist Andy Teeling, to eschew the Economic Developer position in favor of a dedicated Public Relations role. Feeling the second time is the charm, Katy Nunez brings in Tucker who, according to the county, has a wealth of private sector experience in community and economic development, project management, public policy, land use, eco-tourism, research and finance. Tucker holds a Master’s Degree in Resource Administration and Management and a Bachelor of Environmental Science/Public Affairs and Policy Degree from the University of New Hampshire.