You are here: Home / Archives for Our Town

The Town of Cheriton will hold its 3rd annual Christmas Parade and Tree lighting on December 3rd. The parade begins at 4 pm, and the tree lighting will take place right after.

The rain date is set for December 4th. See the map below for pedestrian viewing areas.

The Invisible History Committee is creating a walking tour to highlight the contributions and experiences of African Americans in Cape Charles. The are looking for photographs and information about locations such as the Jefferson Store, Carver Spot, and Spady’s Service Station (Kellogg Building).

The response to the Town of Cape Charles’ lastest edict restricting street parties has met with fiery responses. Strawberry Street had been the scene of awesome, fun, and safe street parties for some time now. However, the town feels differently and has banned this type of event. Sources tell the Mirror the effort stems from the extreme concentration of visitors in the town, as well as very high rates of IOGC (Idiots On Golf Carts).

These angry citizens are encouraging folks to channel their inner Kevin Bacon and defy the Town’s Footloose mandate.

Wendell told the Mirror, “Nobody ever confused the Cape Charles governing body with rocket scientists, but some things you just can’t fix”.

Mirror: Mr. Wendell, due to this event, are you reconsidering a run for Mayor?”

If you did not know, the Pearl Market will be open every Saturday through October 30. If you haven’t checked it out, you need to. The Pearl is an honest, true bit of fresh air for those longing for an establishment that is really Shore.

The Pearl Market is located in the old Latimer shed at 4198 Latimer Siding Rd–on south end of Route 13 just across from the CBBT big electronic notice board.

The three summer holiday weekend Saturdays will have slightly extended hours. They many of the same vendors from last season and are thrilled to have many new food, retail, and produce vendors. Freshly prepared food, a wonderful assortment of local produce and seafood, and cut flowers will be available every weekend.

Please follow them on instagram @pearlmarketcc for more updates on weekly featured vendors. Please come eat, gather and shop at The Pearl Market and support our local vendors!

This note was sent to the Mirror by Marlene Cree.

Actually, the rain enhanced the reflections on the lighted golf carts in the Parade which is a delightful and unique “Cape Charles Thing”.

But the Tidewater Concert Band was the star of the evening, playing all our Christmas favorites. I remember that for many years when Chris Bannon was the Master of Ceremonies that music was a hallmark of the Illumination.

Then for whatever that essentially disappeared.  Having the Concert Band was a great decision, kudos to those who arranged it.  I hope that having the Band at the Illumination each year could become a new Cape Charles tradition, great for kids and adults alike.

The Cape Charles Town Council voted unanimously to approve action items that will allow the Town Manager move forward with a grant application that will help construct a bike trail from town limits, up Stone Road and across Route 13 to Food Lion, where it will eventually connect with Phase IV of Southern Tip Bike & Hike Trail. Council approved:

In September, Town Council met with Curtis Smith, Director of Planning for the Accomack-Northampton Planning District Commission (A-NPDC), who addressed the grant opportunity for a multi-use pedestrian trail along the Stone Road corridor.

There is no local match required. END_OF_DOCUMENT_TOKEN_TO_BE_REPLACED

Kimb Denny, Executive Director of the Cape Charles Historical Society, is raising money for the organization via a fundraiser on Facebook. Any amount is appreciated! Please consider sharing this fundraiser with your friends and family too. The Bill and Melinda Gates Foundation will match donations made on #givingtuesday, November 28th. You can also donate to the Cape Charles Museum and Welcome Center directly through their website at CapeCharlesMuseum.org.

The mission of the Cape Charles Historical Society is very important to our area. They strive to build awareness and pride in the cultural and historical diversity of the Eastern Shore of Virginia, particularly Cape Charles. The society works to create a community center for the presentation of education programs of interest and importance to the community. They preserve and catalog local and regional historic structures, artifacts, photographs, and oral history for tomorrow’s citizens. They also support a regional historic archive and research office for collection. They serve as a welcome center for the town of Cape Charles, with information on the town, local businesses, restaurants, activities, and more. During the warm season, they  sponsor the Cape Charles Farmers Market at the Museum.

On Saturday, November 25 the Cape Charles Historical Society will hold its 20th annual Oyster Roast from 4 until 8 at the Museum – note the earlier time this year. The menu includes local oysters – roasted and raw, fried chicken, potato salad, chowder, 4 bean salad, homemade rolls, desserts, coffee, and soda, with beer and wine available. Food is served 4 -6 PM, with live classic and acoustic rock music by Mike Proffitt and Dana Silvercloud throughout. Also, a silent auction featuring an array of eclectic items, and the traditional Eastern Shore 50/50 raffle. Seating is available both inside the Museum and outside under the tent (with some heat). 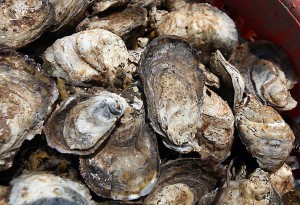 Tickets to the Roast are $40 for adults and $15 for children 7-12. As always, we welcome sponsors ($120 gives 2 tickets; $240 – 4 tickets, etc) and also items for the Silent Auction. Tickets and sponsorships are available in Cape Charles at Periwinkles on 215 Mason Ave by cash or check, and at the Museum by cash, check or credit card. To pay over the internet with a credit card, send an email to ccmuseum@hughes.net stating number of tickets desired, and you will be invoiced through Paypal. ($1 extra per ticket to cover Paypal or credit card costs).

Best to purchase tickets at least 10 days before the event, as we usually sell out and they may not be available at the door. Proceeds of the event benefit the Cape Charles Museum. Call 757-331-1008 for more information. Parking lot parking available just east of the Museum. Remember to bring your oyster knives if you like to use them. They can also be purchased at the event.

In 2015, the Virginia Department of Environmental Quality requested that Bay Coast Railroad, owners and operators of the Cape Charles rail yard, come up with a plan to remove or recycle a massive pile of railroad ties that were piled up behind the Cape Charles Museum. The ties, which were treated with creosote, were  recovered and moved by the Army Corps of Engineers while preparing the containment area for the current dredging spoils site. At the time, Creosote-treated products such as railroad ties were required to be disposed of in an approved landfill or be recycled appropriately. DEQ policy noted that the railroad ties must be treated as hazardous waste.

Over the next few years, the property went through a few changes, but the railroad ties were never moved. The corporation Canonie Atlantic, acting on behalf of Accomack-Northampton Transportation District Commission, now owns and leases the property to Cassatt Management, LLC (DBA), doing business as Bay Coast Railroad. Northampton County District 2 Supervisor Larry LeMond is chairman of Canonie Atlantic.

On January 19, 2017, after learning that Canonie owned the Property, and that the ties had not been dealt with, DEQ issued to Canonie a notice for the violation; not complying with the original order.

On April 28, 2017, DEQ met with representatives of Cassatt to discuss corrective action to resolve the violation . During the meeting, Cassatt provided DEQ with an updated status on the conditions of the railroad ties on the Canonie Property. The information that Cassatt provided indicated that “the railroad ties were significantly decayed and appeared to present little or no harm to human health and the environment. It was agreed that the remaining railroad ties may remain in place with a cover of earthen materials and application of grass seed to control erosion.”

The enforcement action also contained a corrective action plan which required covering all exposed material with earthen material to sustain grass seed and prevent erosion; i.e. the pile of railroad ties remains in place, creosote and all. 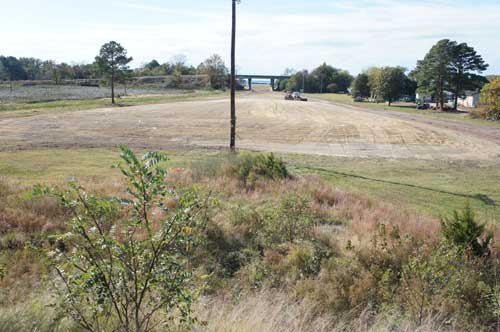 Site where decaying creosote railroad ties are buried. No tests were conducted to determine if ground or water contamination had occurred (Mirror Photo)

After receiving information on the order,  the Mirror contacted DEQ again, “In the order, it states that ‘The information that Cassatt provided indicated that the railroad ties were significantly decayed and appeared to present little or no harm to human health and the environment.‘ What data, testing or analysis did Cassatt provide to confirm that the ties posed little or no harm? The soil here on the Shore is very loamy, which presents concerns when items like creosote timbers are allowed to just decay into it.”

The DEQ responded “the information was in the manner of a discussion, which DEQ agreed with based upon the original inspection, that (as stated in the order) “the railroad ties were significantly degraded and were considered to present little or no harm to human health and the environment”.

No tests or analysis were performed on the site to determine whether there was evidence of ground or ground water contamination.

Confederate monuments are being linked to rise of Jim Crow in early 1900’s and resistance to the Civil Rights Movement in the 1950‘s-1960’s. The truth of the matter, however, is the earliest monuments were erected immediately after Reconstruction ended in 1877 and Union occupation forces were withdrawn from Southern States; by wives, widows, and daughters of Confederate veterans. The money was raised at tea parties, bazaars, and book sales. Economic conditions did not allow for construction of many monuments until the early 1900’s. Monuments erected at beginning of Civil Rights Movement coincided with Civil War Centennial (1959-1965) and 100th anniversary of adoption of 13th Amendment.

Those who believe monuments should be removed need to have a better understanding of the history of bondage in America and why these monuments are inscribed with words that speak of honor and the cause they fought for was considered in defense of freedom and resisting tyranny.

Bondage of one person by another goes as far back as Babylon in the 18th century BC. The word slavery derives from 10th century AD German expansion eastward to Slavic areas. So many Slavs were captured the generic name became slave. END_OF_DOCUMENT_TOKEN_TO_BE_REPLACED