The Toxics Release Inventory (TRI) tracks the management of certain toxic chemicals that may pose a threat to human health and the environment. Certain industrial facilities in the U.S. must report annually how much of each chemical is recycled, combusted for energy recovery, treated for destruction, and disposed of or otherwise released on- and off-site. This information is collectively referred to as production-related waste managed.

Note: the pollution released from these factories is all permitted. According to the EPA’s enforcement and compliance history online database, Jewell Coke Co., the Clover Power Station and the Perdue Farms Accomac Processing Plant all are currently in compliance with the Clean Air Act, the Clean Water Act and the Resources Conservation and Recovery Act.

There is a connection between large amounts of pollution and high poverty rates.

Accomac, like other areas on the list, has large amounts of pollution with few residents, giving them high rates of pollution per person. Clover and Accomac are also above the average poverty rate for Virginia. 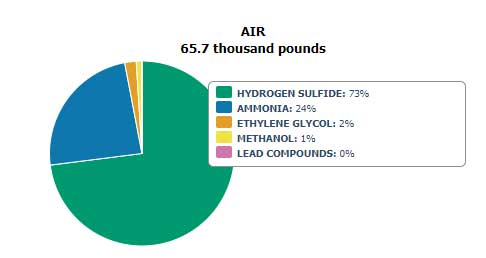