This Friday concluded another successful season for the Arts Enter Academy of Theater Arts. The class met every Friday, and provided a safe haven for young actors to begin exploring the craft of stage acting. While there was some formal reading and script analysis, most of the classes focused on theater games and active improvisation.

This year’s class made great strides on the stage. At the top of the list is Allison Shockley, who scored the lead role in this spring’s The Clam-Digger’s Daughter. Last Christmas, student Ella Eder won the lead role of Rudolph in the winter production of the same name. In the Halloween show, Rosie Denny, Jada Crockett and Avery Hadden were superb in Dracula’s Boarding House.

Other success stories include: 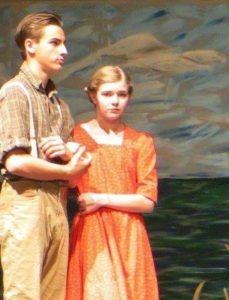 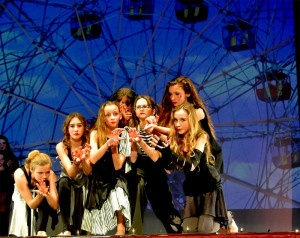 Modern I with ‘Coney Island’, Arts Enter School of Dance

The theater academy is closely tied to Arts Enter School of Dance. This relationship highlights one of the school’s main goals—to create performers that are a triple threat comprised of acting, dancing and singing. Two thirds of the actors in the theater academy are also in the dance program. Almost half were involved in the musical portions of Rudolph and The Clam-Digger’s Daughter.

The theater academy will resume the 2nd Friday in September 2017.