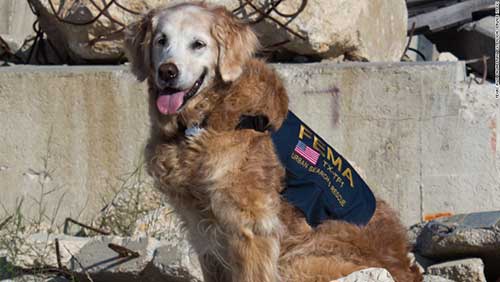 After the attacks of September 11, 2001, a two-year-old golden retriever named Bretagne (pronounced Brit-nee), was rushed to New York to help in the rescue and recovery. Bretagne, the oldest-surviving member of the dogs that worked at Ground Zero was euthanized this week due to declining health. Bretagne and Denise Corliss, her owner and handler, worked at Ground Zero for 10 days as their mission went from rescue to recovery. Here’s how a teammate remembered her:
She has always taken her job as a search dog seriously, but herself not so much. Always ready for a belly rub, or a treat. In remembering her first deployment at the World Trade Center, there are images of her going to where she was directed to search, the unknown, the chaotic environment. But even then, she knew who needed the comfort of a dog, which firefighter needed to hold her close and stroke her fur.

Bretagne, a FEMA-certified canine who also served on rescue missions during Hurricanes Katrina, Rita, and Ivan retired from formal search work at the age of nine, but continued to work as a goodwill ambassador for her local fire department, and as a reading assistance dog at a local elementary school. She also became a star of a non-fiction book about senior dogs, met Texas First Lady Cecilia Abbott, and late last year, met with former President George H.W. Bush at his Presidential Library in College Station, TX.

In 2014, Bretagne was nominated for the American Humane Association “Hero Dog Award” and received the red carpet treatment during a ceremony in Hollywood, CA.
In 2014, she visited the September 11 Memorial, and a year later, she was back in New York for her 16th birthday.

As Bretagne entered the animal hospital in Cypress, Texas, Monday, firefighters and search-and-rescue workers from the Cy-Fair Volunteer Fire Department lined the sidewalk and saluted. She was carried out later, her body draped in an American flag.

Story based on a press release from Texas A&M Extension Service: https://teex.org/Pages/about-us/article.aspx?id=1441