In Cape Charles, we are very proud of our police department. As citizens, we depend on the CCPD for many general law enforcement duties such patrol, conducting traffic stops and watching out for suspected  illegal activity. While these functions are important, sometimes the most important part of the job lies closer to the heart. This report was sent in by citizens David and Jane Cowan:

“On Sunday morning our two black dogs, Angus and Audrey, decided to go for another adventure without us. We reported our runaway dogs to the Northampton County Sheriff’s Office, who notified local law enforcement.

We had a number of sightings, including a visit into a local store where Audrey was given doggie treats.

Late Sunday afternoon we spoke with a Cape Charles police officer, who told us our dogs were nearby and that he had been trying to capture them. But young Audrey is very defensive of old Angus (13 years), and she would not let him near.

The officer took us to the dogs, and they quickly jumped into our truck.

We did not get the officer’s name, but we would like to thank him and the Sheriff’s Office for helping our dogs get back home safely.”

The Mirror contacted the Chief Pruitt of the CCPD. The officer that located Angus and Audrey was MPO Jake Leuer. Good job, sir. 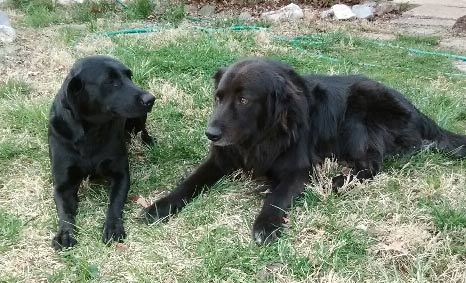 Audrey and Angus back home thanks to the work of MPO Jake Leuer.