“I was outraged to see VDOT chopping two crape myrtles unnecessarily this morning at 8:10! Why? How can they do this? There aren’t even any power lines? This is NOT the way to properly prune this tree!” – citizen report on May 22nd.

A concerned citizen reported the abuse, hacking, and violation of crape myrtles by VDOT crews on Mason Avenue. The Mirror promptly contacted town staff to ask if they were aware of the “pruning” effort. They said the walked out on Mason and did not see any pruning operations. The Mirror next supplied photographic evidence, and the response from the town was, “Yep. That’s a VDOT crew in the VDOT right of way. Presumably doing tasks under a VDOT work order. I suggest you contact VDOT with questions or concerns.”

Probably a little late for that.

For all the preachy talk about Main Street, Community Enhancement or whatever, this seems like a rather lazy, Laissez-faire approach to maintaining a streetscape. Granted, VDOT can ultimately do what it pleases in its right of way, however at what point does the town get in their face over doing things like this? You would think the town would like a heads up when work like this is taking place in town. A little courtesy goes a long way, especially in the business district. 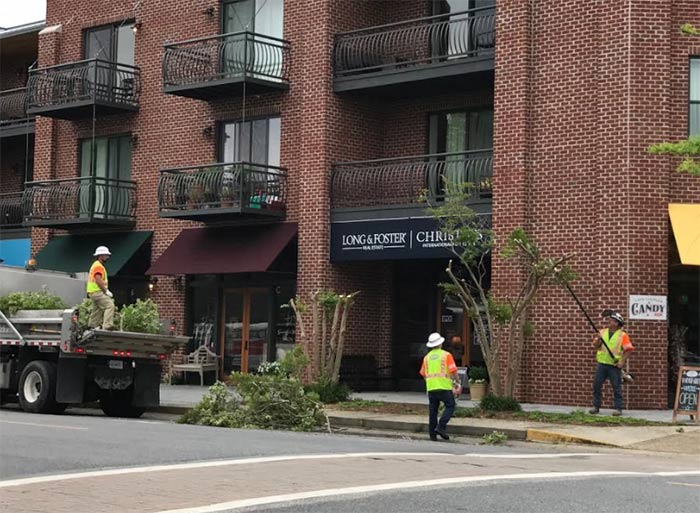 The importance of crape myrtle pruning

Why prune crape myrtles correctly? Correct pruning yields gracefully shaped trees with more blooms that are held upright on strong stems. And flowers arrive earlier than do those on unpruned or mispruned plants.

Crape myrtles bloom on new growth, so prune them in early spring before they break dormancy. Although some gardeners prune their crape myrtles in the fall, I do not recommend doing this. Fall pruning not only creates an unattractive look for winter but also removes the current year’s growth as a buffer against any potential winter damage.