On September 9, 2016, the Cape Charles Mirror contacted the Virginia Department of Transportation regarding the connector road project in Cape Charles, sometimes referred to as the “Harbor Access Road”. The Mirror submitted a series of questions, and on November 21, 2016, VDOT sent the following responses (VDOT responses are in italics):

I.Have VDOT attorneys reviewed the Annexation Agreement between the Town of Cape Charles and then developer Brown and Root?

From the above correspondence, VDOT agrees that Bay Creek South, LLC is obligated to construct the project “at its sole expense”. When pressed on why they were unaware of the existence of the Annexation agreement, they say that they “rely on the responses from localities where any such proffers might be present.” 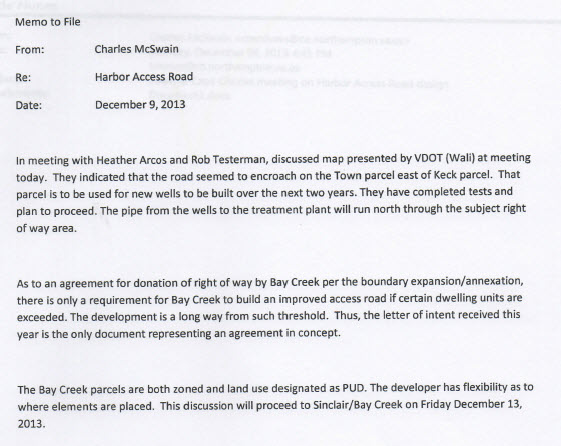 While Mr. McSwain confirms the existence of the agreement, and the requirement that Bay Creek construct the road, it also appears that he did not actually read it; in his email, he mentions the mythic notion of a trigger, in this case exceeding the threshold of units, before the agreement kicks into motion. This same argument was used by Richard Foster (Bay Creek) to stupefy the town when Cape Charles attempted to get the developer to honor the agreement and construct the new wastewater plant. However, nowhere in the report on government does any such language exist. As was noted  by the State Attorney General, in this case working for VDOT, Bay Creek South, LLC is required to construct the roadway at its sole expense.

In the email chain below, the project was touted at the state level. Governor McAuliffe’s 2014 visit was used to light a fire under the project.  Not sure what conversations may have taken place off-line, but Mary Rae Carter, at the time Interim Director of Commerce and Trade is asking about whether the new road would be used to transport rocket parts: 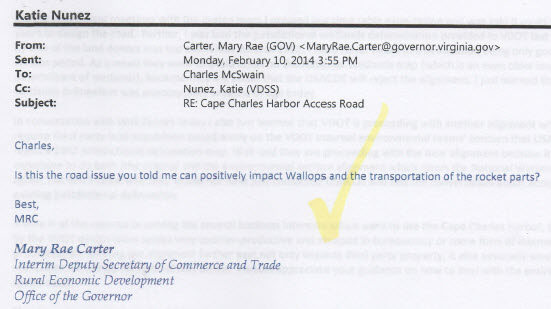 In an email sent on February 18th, 2014, Supervisor Larry LeMond, also working on behalf of Bay Coast Railroad, notes the expense of the roadway was to be borne by Bay Creek South, LLC:

Note: Not sure whether Mr. Lemond was representing the county or Bay Coast Railroad. 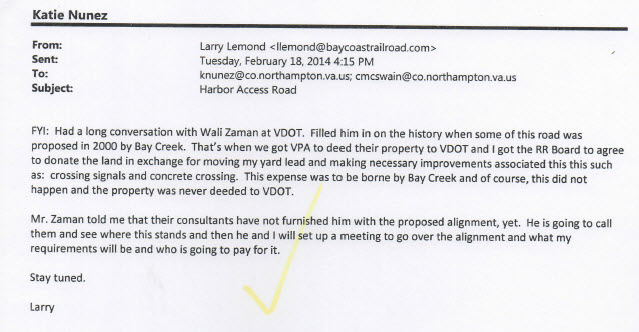 The usual suspects made cameo appearances. This letter from Eyre Baldwin and Southport is a key indicator as to what extent the tail is wagging the dog in Northampton County. 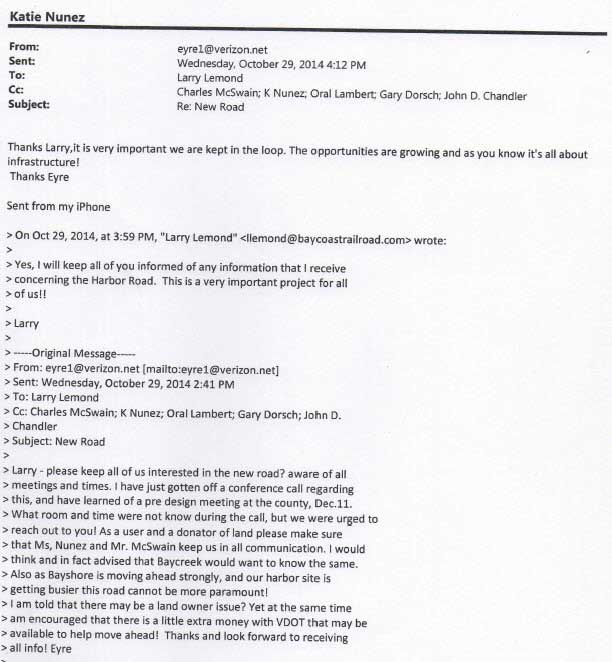 In the below email, Cape Charles Town Manager Heather Arcos notes that one of the prime reasons for the roadway improvement project is that Bay Creek traffic will be an increasing burden: 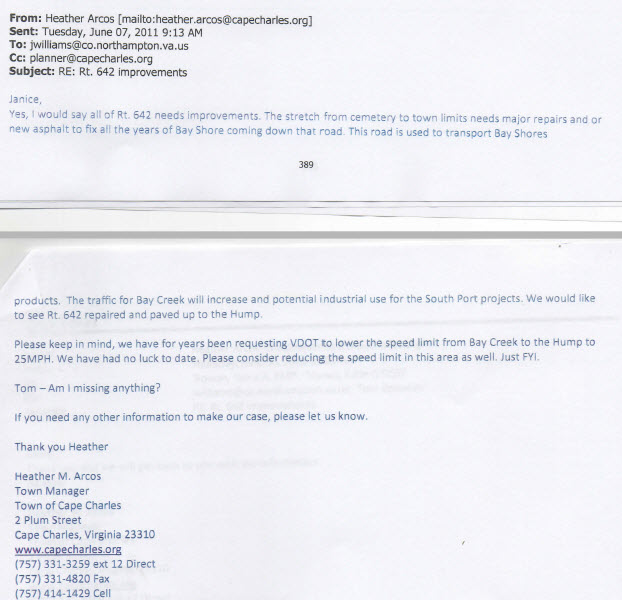 The State Attorney General agrees that the cost of the 642 Connector road project should not be placed on the shoulders of the tax payer, but should be borne by the developer Bay Creek South, LLC. When pressed about why the AG was not going to enforce the agreement, the response was that VDOT was not party to the agreement, and thus could not enforce it.

That response was curious, misleading, and we believe wrong. The Mirror responded that as a point of reference, although VDOT is not a party to the Annexation Agreement, the Virginia Attorney General, as the enforcement arm of the State legislative acts: (i.e. Law No. 27) is responsible, and that the Commonwealth Attorney in Northampton County is paid to represent the Commonwealth as its local representative; however, in cases of conflict someone has to step aside and the AG’s office in Richmond steps in to handle the work.

After refusing to address the issue, the Mirror entered a Freedom of Information Act request, attempting to find out why the AG was not acting. That request was denied based on “client/attorney privilege”.

VDOT claims that they were unaware of Law No. 27, and that it was Northampton County’s responsibility to tell them. The question is, why did the county withhold that information? They were certainly aware of it. Why did they not acquire a legal opinion? County Attorney Bruce Jones was aware of the agreement—he represented the county in their efforts to contest the agreement in 1991.

The Town of Cape Charles was fully aware of the annexation agreement–they have the documents posted on the town’s web site. Mayor Sullivan and Bob Panek penned several letters to Bay Creek South, attempting to get them honor the agreement relative to the developer’s responsibility to build the new waste water facility. This is a town that spent over $170,000.00 in legal fees for the privilege of selling the old high school for $10, and it routinely spends over $120k on attorney fees annually—why did they not get a legal opinion on the project?

Email correspondence shows that the Governor was also aware of this, attempting to justify the project due to its ability to deliver rocket parts to Wallops (putting expensive rocket parts on a barge and exposing them to salt water does seem like the best procedure). If the Governor was aware of the project, then it isn’t too much of stretch to think Lt. Governor Ralph Northam had to know about it. It is his turf. The Mirror has reached out to Northam twice—we have yet to receive a response.

In conversations with sources around the capital, the Mirror was told off the record that  it sounds like the FOIA rejection, as well as the reluctance to enforce Law No.27 is a stand down. In a tight election year, having Lt. Governor Northam in this fine mess would not be politically expedient. However, if the Lieutenant Governor is aware, and chose to allow his constituents to be ripped off in this fashion, that may be just as embarrassing.

The county, including the current Board of Supervisors, the Town of Cape Charles, VDOT and the State Attorney General’s office was or now is aware of the annexation agreement between the town and county, and that the developer Bay Creek South is obligated to pay for the $12 million-dollar connector road leading into Cape Charles Harbor.

Most citizens would agree that new connector road is good for the county and the town, but the ends do not justify the means. A few folks will reap the benefits, but doing so on the backs of the taxpayer.

Our elected and appointed government officials have not only allowed this fraud to be perpetrated on the very people they have sworn to protect, but have apparently been willing participants.

The assumption must be that we county folks are soft and lazy, intellectually tired, and that our eyes are glazing over just reading this, that if they just let it go and don’t do anything, eventually everyone will forget about it, and the whole thing will go away. The problem with that theory is that, even if they build the road, and start using it, Law No. 27, which is a legislative act of the State, never goes away (unless by another legislative act). They will always be obligated to pay.

Eventually, maybe new regimes that have a sense of ethics and integrity will take up posts at the state and local levels and will make things right.

But then again, maybe someday pigs will fly.