On July 6th, the Town of Exmore called on Northampton County to dissolve and disband the County Public Service Authority (PSA). In a resolution titled ‘Requesting that the Eastern Shore of Virginia Public Service Authority be disbanded”, Exmore cites various reasons for the resolution, such as public support has all but evaporated, and even after spending $78,000 on studies, there is little if any municipal support; not to mention the County has pulled staff off of the “unpopular project”.

Although the majority of the reasons Exmore gives for disbanding the project are reasonalbe, the second paragraph is not quite accurate-this error, however, serendipitously shines a light on the  relationship between Cape Charles Assistant Town Manager Bob Panek and County Administrator Katie Nunez, a relationship that goes back much further than the current incarnation of the PSA. 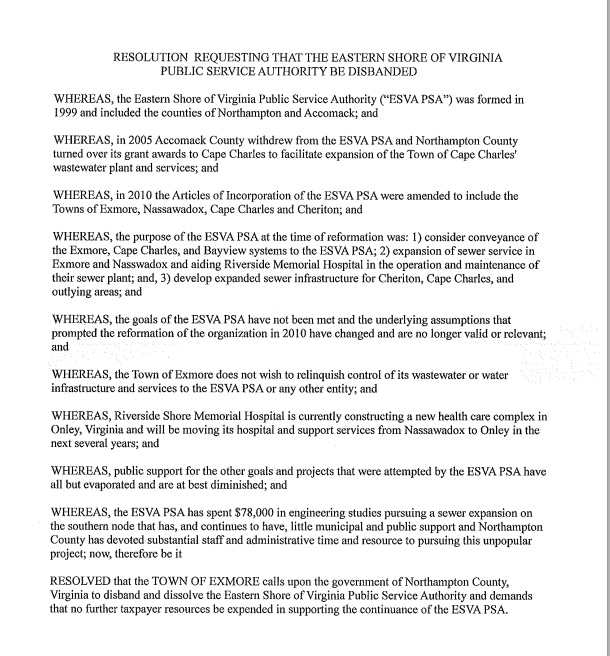 In the second paragraph of the Exmore resolution, it states that in 2005 Accomack withdrew from the ESVA PSA and Northampton turned over its grant awards to Cape Charles to facilitate the expansion of the Town’s waste water plant and services.

Accomack did withdraw in 2005, but what actually went down after that is more involved.

In 2002 and 2005, the County did win the award for an EPA State and Tribal Assistance Grant which totaled close to $663K. This was meant to be used for wastewater work for Nassawadox and Exmore. At the time, this all fell under the purview of the Accomack-Northampton Planning District Commission (ANPDC ). Then, just as now, there was little interest, and the project fizzled out. When that happened, Nunez and Panek met (at whose request?), and she offered to funnel the money into Cape Charles. Next, work began to get the grant withdrawn from the County, and then reissued to Cape Charles.

Approximately $663,000 was provided in the FY 2002 and FY 2005 Environmental Protection Agency Appropriations Acts for wastewater system infrastructure and development in Northampton County. The grant is available to pay for 55% of the cost of qualifying projects. The County is no longer considering development of a wastewater system and offered to support transfer of this grant to the Town. Town staff worked with the staffs of the County, the EPA, Representative Drake, and the congressional committees to accomplish this transfer. We are now working with EPA and the Virginia Department of Environmental Quality to complete the necessary paperwork to access the funds. As part of this process, EPA requires that the organization’s governing body designate by formal resolution an authorized representative to sign all documents related to the grant.

Once the funds were reallocated, they were used for the Mason Avenue water mains and sewer improvement project, not for the new wastewater plant. Bids were received in January 2011, with the lowest being from JCB Construction ($1.285 million).

Even with this minor historical error, the repudiation by the Town of Exmore is a critical blow to the future of the southern node pipeline, and could be taken as an indictment against Mr. Panek, as well as Cape Charles’ efforts to reshape the lower Eastern Shore. Emphasizing what little trust or respect Exmore has left for the Cape Charles Assistant Town Manager, neither the Exmore town staff nor their PSA representative notified Mr. Panek of the coming resolution. One has to wonder what Exmore knows that Cape Charles doesn’t. The same may be true for Katie Nunez, who was similarly blindsided by the BoS, when they put the entire Southern Node project on hold at the last joint meeting with the PSA.

After word of the Exmore letter met the Mayor and Town Council, rather than step back and reflect on what had just taken place, Mayor Proto instead expressed concern for the reputation of the Town’s anointed golden cow, its waste water plant. “It seems to me we need to send a letter to the Exmore Town Council highlighting these inaccuracies to make the correct information a matter of record. I don’t want yet one more piece of misinformation about the waste water treatment plant to be out there unchallenged.”

Though not a knockout blow, the Exmore resolution certainly staggered the PSA and its supporters, requiring a standing eight count. With all work currently on hold, whether this lump will remain submerged in the muck, or will ever rise up into the light, remains to be seen.