The discovery in 1953 of the double helix, the twisted-ladder structure of deoxyribonucleic acid (DNA), by James Watson and Francis Crick marked a milestone in the history of science and gave rise to modern molecular biology, which is largely concerned with understanding how genes control the chemical processes within cells. In short order, their discovery yielded ground-breaking insights into the genetic code and protein synthesis. During the 1970s and 1980s, it helped to produce new and powerful scientific techniques, specifically recombinant DNA research, genetic engineering, rapid gene sequencing, and monoclonal antibodies, techniques on which today’s multi-billion dollar biotechnology industry is founded. Major current advances in science, namely genetic fingerprinting and modern forensics, the mapping of the human genome, and the promise, yet unfulfilled, of gene therapy, all have their origins in Watson and Crick’s inspired work. The double helix has not only reshaped biology, it has become a cultural icon, represented in sculpture, visual art, jewelry, and toys.

Watson and Crick published their findings in a one-page paper, with the understated title “A Structure for Deoxyribose Nucleic Acid,” in the British scientific weekly Nature on April 25, 1953, illustrated with a schematic drawing of the double helix by Crick’s wife, Odile. A coin toss decided the order in which they were named as authors. Foremost among the “novel features” of “considerable biological interest” they described was the pairing of the bases on the inside of the two DNA backbones: A=T and C=G. The pairing rule immediately suggested a copying mechanism for DNA: given the sequence of the bases in one strand, that of the other was automatically determined, which meant that when the two chains separated, each served as a template for a complementary new chain. Watson and Crick developed their ideas about genetic replication in a second article in Nature, published on May 30, 1953. 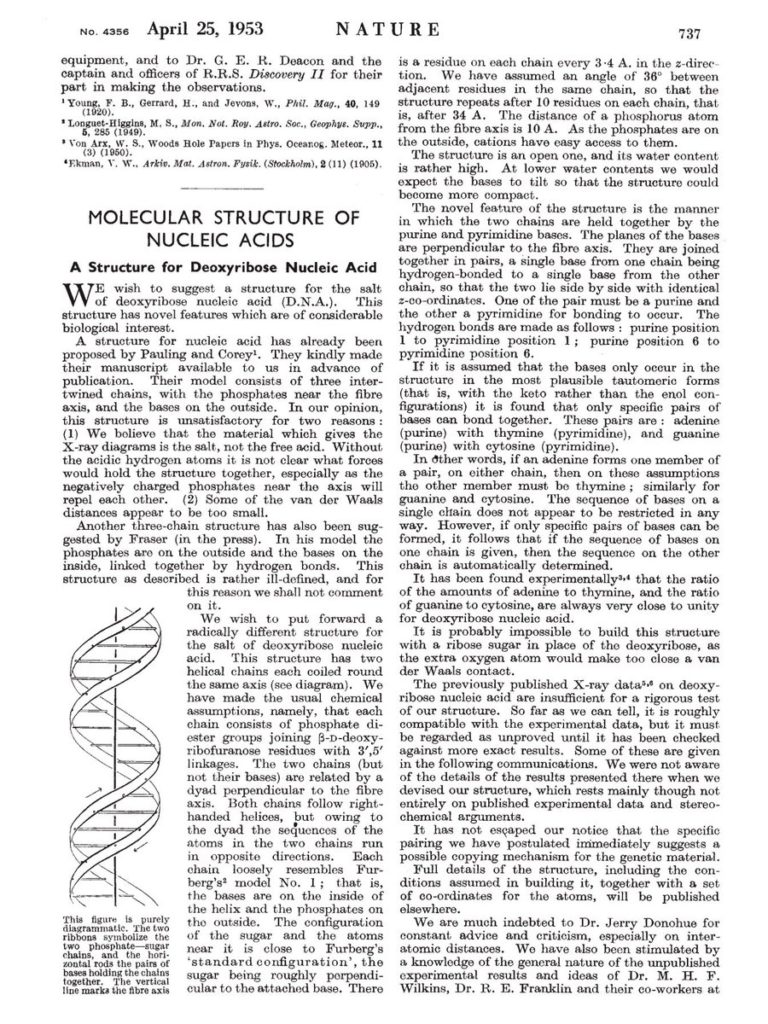 65 years ago, Watson and Crick published this one-page paper about the structure of DNA.