NASA’s Mars InSight lander became the first spacecraft to successfully land on Mars since 2012 when it touched down on Nov. 27. It’s mission: to drill deep into Mars’ interior and explore how the planet formed.

The U.S. is the only country to have successfully landed spacecraft on Mars, but a glitch-free landing was by no means guaranteed. 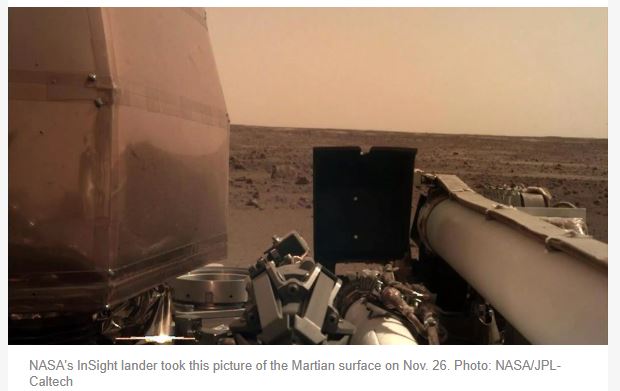 InSight will be the first spacecraft to drill down into the deep interior of Mars, and scientists hope the data it gathers will give them clues into how the planet formed.
The information it gathers could even shed light on how our home planet and others in our solar system evolved.

“InSight will address a fundamental issue of solar system science, not just specific questions about a single planet. By studying Mars, InSight would illuminate the earliest evolution of rocky planets, including Earth.” — NASA said in a mission fact sheet.

Not everyone in the science community thinks space exploration is a good thing.

Adler astronomer Lucianne Walkowicz, who is the Baruch S. Blumberg NASA/Library of Congress Chair in Astrobiology, and Cosmologist Dr. Chanda Prescod-Weinstein  with Department of Physics at the University of Washington, and fellow at NASA’s Goddard Space Flight Center, at a conference titled, “Decolonizing Mars”, voiced concerns on the exploration or colonization of Mars. The main concerns are intersectional, an assertion that people are often disadvantaged by multiple sources of oppression: their race, class, gender identity, sexual orientation, religion, and other identity markers

Walkowicz on the topic of Indigenous Martian’s rights.

There are a variety of scientific reasons why human presence might make certain investigations easier on Mars. But I’m disturbed by the way people talk about going to Mars as if the planet is ours… When we talk about terraforming, that’s a planetary-scale strip mining operation. If you transform a planetary environment, even if you think you know how to do it, that represents a total alteration of the chemistry and physics of the planet, which means you may erase the history of life that might be there.

It’s been troubling to me to hear people erasing what’s going on here on our own planet both from an environmental standpoint and an indigenous rights standpoint when they talk about going to other planets.

There’s a matter of inclusion—space exploration is something that we all take part in. That’s true of public missions and not private companies. Their aims are often different from what people think about. We have to think about the way we talk about who goes to space—who’s included in the conversation in who’s not. One of the fundamental things to do is just include [those normally left out of these discussions] in the conversation in a real way, such that they’re actually listened to.

On what ‘Decolonizing” means to Chanda Prescod-Weinstein: Exploring and developing are bad words.

I’m trying to think carefully about what our relationship to Mars should be, and whether we can avoid reproducing deeply entrenched colonial behaviors as we seek to better understand our Solar System. This includes thinking about why our language for developing understandings of environments that are new to us tends to still be colonial: “colonizing Mars” and “exploring” and “developing,” for example. These are deeply fraught terms that have traditionally referred to problematic behaviors by imperialists with those that we would call “indigenous” and “people of color” often on the receiving end of violent activities.

On the topics of the advancement of science and technological progress, including whether exploring Mars is wrong: Science is evil and kills things.

I also want us to consider that as we interact with Mars, we may be precluding certain futures. Perhaps life hasn’t developed there yet. Perhaps life may develop in future. Will our interactions with Mars preclude that possibility? Do we have the right to make that choice for the ecosystem? Europeans and non-Indigenous, non-Black Americans have traditionally thought they could do whatever they wanted in an environment that is new to them. Thinking about Mars is a chance to think carefully about where this attitude has gotten us. So far, technological “advancement” has brought us many things, including potentially catastrophic global warming. Global warming is a technological development.

Not sure how Carl Sagan would feel about all this.

“Exploration is in our nature. We began as wanderers, and we are wanderers still. We have lingered long enough on the shores of the cosmic ocean. We are ready at last to set sail for the stars.” ― Carl Sagan, Cosmos

These excerpts were taken from the Gizmodo Interview.